Retail analysts say some bargain hunters are still expected to shop in brick-and-mortar stores, where possible, in the hopes of snagging a doorbuster deal
Nov 27, 2020 9:32 AM By: Canadian Press 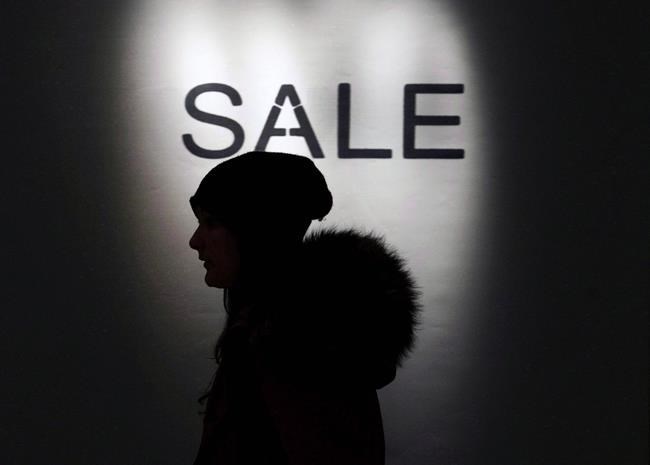 Black Friday shoppers appear to have heeded public health warnings, with more online purchases and little crowding at stores across the country against a backdrop of rising COVID-19 cases.

Many brick-and-mortar stores were deserted compared with the usual crowds and fanfare of the one-day sales bonanza that traditionally launches the holiday shopping season.

Some stores and malls had lineups, but most remained under capacity limits throughout the day.

Discounted big ticket items at big-box stores — often among the first products to sell out on Black Friday — were still well-stocked in many locations halfway through the day.

It's a sign that staggered Black Friday promotions, which many retailers began rolling out as early as October, as well as the push to offer more sales online, has helped curb in-store shopping.

Retail analysts said they expected most of this year's Black Friday purchases to be online.

Ottawa tech-firm Shopify Inc. said online Black Friday sales were "off to a historic start" early in the day, with merchants that use the company's platform breaking last year's peak sales-per-minute record in the first three minutes at 12:03 a.m. Friday morning.

Still, some consumers across the country opted to shop in brick-and-mortar stores.

In Halifax, Daniel Smith said he decided to check out the sales at a local Walmart and was surprised to find no lineup outside and very few people in the aisles.

"I can’t believe there aren't more people here, it's reassuring," he said, though he added that the retail event is usually "tame" compared to the United States.

"It’s a good time to get Christmas presents," he said. "There were some good deals and I’ve got a bunch of nieces and nephews to buy for."

Also in Halifax, a Best Buy worker described the day as "pretty chill," while a Canadian Tire clerk said the store was busier on Thursday — when the chain's weeklong sale started.

Retailers in the city, which has been the site of a recent COVID-19 outbreak, are under occupancy restrictions of 25 per cent normal capacity. Stores in the Halifax Shopping Centre posted limits in their shop windows, many of which could allow fewer than 10 people inside at a time.

The East Coast's more muted Black Friday was mirrored across much of the country.

Still, a few stores offering steep discounts attracted larger crowds. A line up at shoe store Centrall Montreal stretched around the corner, with customers eager to get deals on shoes like Nike Jordan 1s and Yeezys.

David Gorelik, who said he waited outside the store overnight, showed off a pair of shoes he bought for $5  that normally sell for between $180 and $200.

He said it was worth the wait, adding that it's not just the good deals but a "fun experience."

Meanwhile, one Toronto-area mall was no busier than a typical pre-pandemic weekend.

Only the public health protocols differentiated the scene at Mapleview Shopping Centre in Burlington, Ont., from a usual day.

Staff were stationed at each entrance to the building and at central elevators, making sure shoppers kept a safe distance.

Only a few shops — generally the ones advertising storewide promotions without the usual “up to” and “almost everything” caveats — saw customers lining up to enter.

Connie Johnson, a local resident toting a single shopping bag from the women’s clothing store Laura, said she hit the stores early in a bid to beat crowds.

“I’m always concerned about going somewhere, with the virus, but you have to go out and do some things, and I do go to the grocery store and the drugstore, and today I figured I’d go and take a chance,” she said from behind her reusable mask.

Burlington — part of Halton Region and roughly 50 kilometres west of Toronto — is in the red or “control” zone of Ontario’s pandemic plan, with the strictest public health measures short of a lockdown.

However, while Mapleview Shopping Centre was relatively slow,  regional outlet mall Vaughan Mills reportedly had long lineups to get inside.

Meanwhile, parts of Western Canada also saw some shoppers out and about, but fewer than in previous years.

Ten minutes before a Best Buy store in northwest Calgary was set to open, there was nobody in line.

When the store opened, about 25 customers, socially distanced, were lined up waiting to get in. A sign on the door announced a limit of 164 customers and a digital check-in where people would be texted when there was space for them to shop.

"It's a smaller crowd than I was expecting," said Dean Rawley, who was planning to use a gift card to take advantage of the Black Friday deals.

After a record surge in COVID-19 cases this week, Alberta put in place stricter public health measures including limiting occupancy in retail businesses to 25 per cent capacity.

Rawley said he wasn't concerned about venturing out.

"Not particularly. I'm not too worried about it," he said. "If something happens. It happens."

In Manitoba, the province urged people to stay home and shop online, saying that provincial workers will be "out in full force on Black Friday" ensuring public health orders are adhered to.

On the West Coast, streets in Vancouver's downtown core lined with major retailers and department stores were largely empty Friday.

A few shoppers trickled in and out of stores decked out with Black Friday sale signs, a far cry for an area that's often bustling during the holiday season.

Retail analysts say the bulk of today's purchases will probably be online.

Eric Morris, head of retail at Google Canada, said e-commerce in Canada has doubled during the pandemic.

He said given ongoing lockdowns and in-store capacity limits, online sales are expected to be strong today and remain heightened over the holiday shopping season.

Black Friday, which started as a post-Thanksgiving sale in the United States, has gained in popularity in Canada in recent years.

It has also become an increasingly important sales event for retailers, along with Cyber Monday, overshadowing Boxing Day.

“It's going to be a day where retailers look to add some sweeteners to entice consumers, particularly with the pull forward of Black Friday," he said. "I think folks will be seeking out something special on Cyber Monday.”

- With files from Nicole Thompson in Burlington, Jacob Serebrin in Montreal and Bill Graveland in Calgary.

This report by The Canadian Press was first published Nov. 27, 2020.