As many Canadians were laid off or switched to working from home, others were declared essential and continued to go into work every day regardless of surging COVID-19 cases
Mar 22, 2021 7:20 PM By: Canadian Press 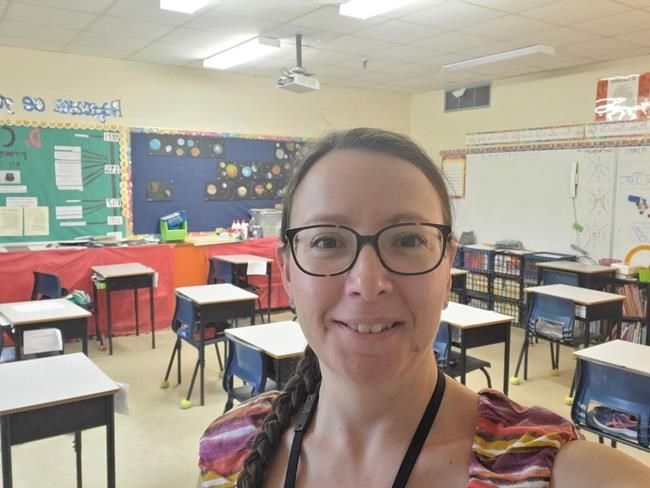 HALIFAX — It's been a year since office towers were hollowed out, malls became ghost towns and the din of restaurants was hushed.

Yet as many Canadians were laid off or switched to working from home, others were declared essential and continued to go into work every day regardless of surging COVID-19 cases.

In an effort to understand the life of essential workers over the past year, The Canadian Press interviewed four people who have largely continued work as usual through the pandemic: A bus driver, a teacher, a construction worker and a grocery store cashier.

These are their stories.

When Shane Curveon drives the No. 23 bus in Kelowna, B.C., he greets many passengers by name.

For a year now, as the novel coronavirus spread across Canada and health officials issued stay-at-home orders, Curveon has continued to drive various routes in the picturesque Okanagan Valley city.

Like many workers declared essential, he approaches his job with a sense of duty and public service.

But after a year of working in a pandemic, Curveon has also had days of fearfulness, confusion and exhaustion.

"There were days when it was absolutely terrifying going into work," he said, noting that for much of the first wave masks weren't mandatory and there was no physical barrier protecting drivers.

"Masks are mandatory now but there's no enforcement and we don't have the authority to enforce the rule."

Despite working with the public every day since the initial outbreak of COVID-19, Curveon said bus drivers haven't received a pay bonus and don't appear to have priority access to vaccines.

“I use a lot of technology in the classroom but that’s not the same as teaching all your lessons online,” said Isert, who teaches Grade 6 French immersion at Leslie Thomas Junior High School in the Halifax area.

The following months were a blur of long days trying to develop online resources on the fly, she said, adding that it was "trial by fire."

Schools in Nova Scotia largely returned to in-person classes in the fall.

“It was terrifying at first because we didn’t know what the second wave would look like,” she said, noting that she worried about things like the school’s air ventilation system and the lack of physical distancing in classrooms.

After the first day of class in September, she had a headache and a raw voice after six hours of teaching with a mask on, Isert said.

But a fellow teacher gave her a face mask bracket that helped her breathe and speak more easily, and soon the constant sanitizing of student desks and hands and co-ordinating breaks became a “well-oiled machine.”

“In the beginning, it was really daunting,” she said. “But now it really is routine. The students are really respectful and I feel safe at my school.”

The first two weeks of the pandemic were the hardest for Francois Dore.

The iron worker, who builds structural steel buildings in Ottawa, was sent home until the project he was working on was declared essential.

“It was good to go back to work,” Dore said. “I think it helps to keep the same routine as much as possible.”

Still, while he goes to a job site every day, a lot has changed.

The construction worker wears a mask all day and does a lot more “housekeeping,” he said.

“We try not to share tools and once we're done with them, we sanitize them,” Dore said. “At the end of a shift, we spray down the tool boxes.”

Although there were times he felt nervous going into work, especially when there was uncertainty about how COVID-19 spread, overall Dore said he’s felt safe.

“I’m glad I could keep busy,” Dore said. “I would have never wanted to stay home.”

Every day, Jennifer Hoar stocks vegetables at the Ucluelet Co-op grocert store on the west coast of Vancouver Island, replacing the “blue bearded tomatoes” with fresh red ones.

But her job as assistant manager in the produce department has gotten harder over the past year as the store grappled with supply issues.

It started with a shortage of 10-pound bags of potatoes, then bags of carrots were in short supply and more recently mushrooms were out of stock.

“It’s been a little crazy,” she said. “At first we just couldn’t keep anything on the shelves because people were stocking up. Then things didn't turn up.”

The store would order six pallets of toilet paper, and three cases would arrive, Hoar said.

With some co-workers in self-isolation or caring for family, Hoar logged long days.

But she said neighbours in the small community of about 1,700 year-round would drop off lunch for the store’s employees, from pizza to Sri Lankan curry, and the $2-an-hour pay bonus helped raise morale.

“I was happy to be at work because I didn't have to go through that isolation,” Hoar said. “Coming to work is sometimes hard but staying home can be hard too.”

Still, there are days when the exhaustion of working in a pandemic has crept up on her, especially when customers don’t follow public health protocols in store.

“It’s quite disconcerting now when people walk up and tap me on the shoulder to get my attention,” she said. “We are a resort town and this has happened numerous times with visiting people.”

This report by The Canadian Press was first published March 21, 2021.