Justice Minister says $918,000 will go to the Association of Iroquois and Allied Indians and Lakehead University’s law faculty over three years to support Indigenous law-making research and "lay the foundation" for an Indigenous legal institute in Thunder Bay
Jul 21, 2021 2:23 PM By: Canadian Press 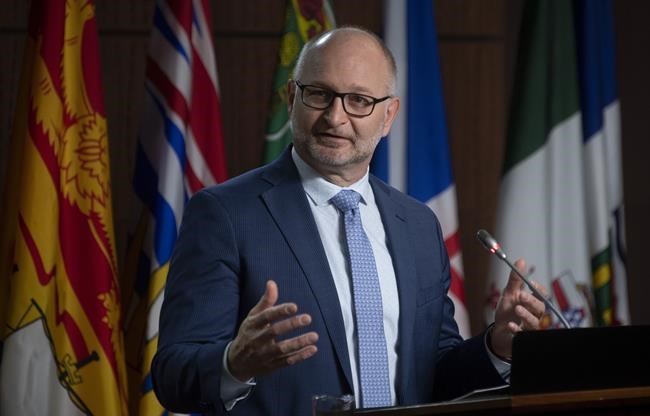 OTTAWA — The federal government is earmarking funds for projects that aim to build on Ottawa's commitment to help revitalize Indigenous legal traditions.

Justice Minister David Lametti says $918,000 will go to the Association of Iroquois and Allied Indians and Lakehead University’s law faculty over three years to support Indigenous law-making research and "lay the foundation" for an Indigenous legal institute in Thunder Bay, Ont.

"We're confident that this funding will help make a real difference for Indigenous communities doing the sometimes challenging but important work of revitalizing their legal systems," he said at a virtual news conference Wednesday.

"I'm a committed legal pluralist. And I firmly believe that the only way that Canada can live up to the goal of being a just country is by recognizing the plurality and the plural existence of legal systems … that allow people to live as they live and have lived since time immemorial."

The funding draws on a previously announced $9.5 million for 21 projects to help First Nations, Inuit and Métis restore Indigenous law in regions across the country.

That plan comes in response to the Truth and Reconciliation Commission's call to action No. 50, which demands the federal government work with Indigenous organizations to fund the establishment of Indigenous law institutes.

Grand Chief Joel Abram from the Association of Iroquois and Allied Indians says Canada is still in the early stages of realizing Indigenous sovereignty.

"I still think there’s a lot of discussion to go with respect to true sovereignty and jurisdiction applied by Indigenous communities. If it's not respected by settler governments, then it's not quite there yet," he said.

Lametti pointed to the example of the Mohawk Nation at Akwesasne, which in 2016 established an independent legal system to handle non-criminal offences within the reserve.

The myriad legal traditions of diverse Indigenous communities should be respected, he added, saying that there is "no one blueprint."

Canada's legal tapestry weaves together English common law, French civil law and, to a very limited extent, Indigenous law — despite past attempts to unravel it from the fabric.

Canadian courts have recognized Indigenous legal traditions in areas that include family law and marriage. But full-fledged reinvigoration of Indigenous legal systems has never been more "urgent," said Julia Hughes, dean of the Lakehead law faculty.

“While Indigenous laws have been observed as customs and traditions in Indigenous communities, Canadian legal institutions have long either ignored or overridden these orders and have at times criminalized Indigenous leaders for applying Indigenous laws," she said.

Hughes said her faculty is committed to "decolonizing and Indigenizing" legal education.

The two projects laid out on Wednesday will see $481,000 go to the Association of Iroquois and Allied Indians to improve the law-making processes of the Lenape, Mohawk, Oneida and Anishinaabe nations in a research phase and then implement those laws and law-making institutions in a pilot phase, the Justice Department said.

Another $437,000 is earmarked for Lakehead University’s Bora Laskin law faculty to revitalize Anishinaabe and Métis law in partnership with regional communities and to create land-based learning opportunities for community members and law students.

This report by The Canadian Press was first published July 21, 2021.

ONTARIO: NDP urges Ford to declare a state of emergency over northern wildfires
Jul 23, 2021 9:30 AM