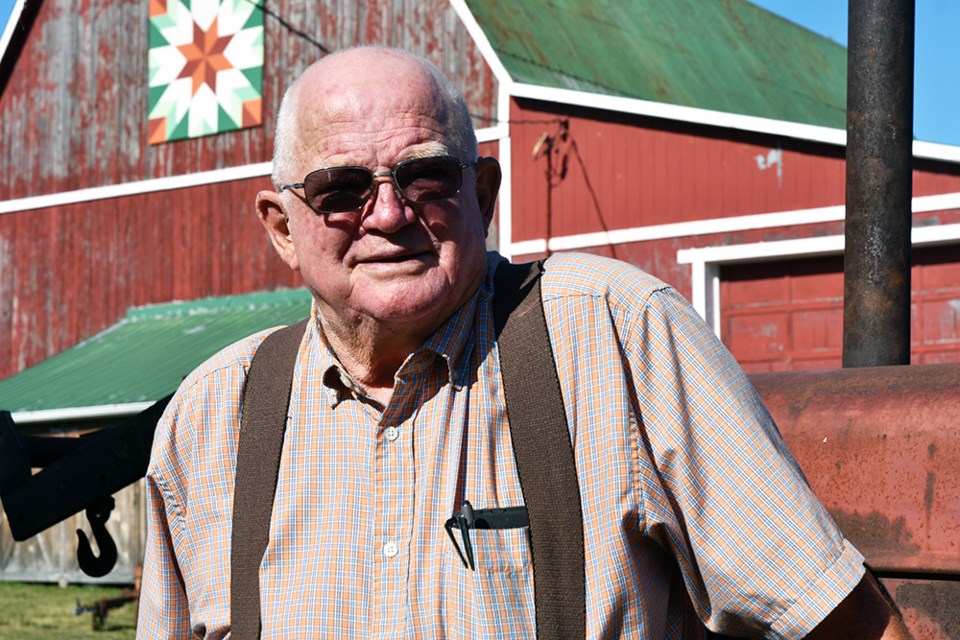 Bill Vernon grew up in a farming family in Cookstown – so it was no wonder that his early experiences as a volunteer were connected with agriculture.

The first organization he joined was the Cookstown Agricultural Society at the age of only 14.

“I was a juniour, up until the age of 18,” said Vernon. “When I first started helping, I was with my dad and my grandfather.”

His first job as a volunteer was to take hot dogs in a basket from the Cookstown Fair food booth, which he described “an old shack that looked like a hen house,” to the fair judges at lunchtime.

After two or three years, Vernon was “promoted” to gateman for the horses at the fair – lifting the gate by a rope to allow horses through, and trying to keep out pedestrians looking for a shortcut.

He once held the rope for the Hon. Earl Rowe.

The Cookstown Fair back in those days was a big deal. Vernon also helped set up the fair displays and became a director of the Ag Society at the age of only 20. “I think I was one of the youngest directors at the time,” Vernon said.

He was also a member of the Cookstown Curling Club, sitting on the volunteer board and serving as both president and past president.

He also skipped his own team. That was back in the 1960s, when he was courting Brenda Murphy. “I was curling then and she would get a little ticked off,” Vernon remembered - especially when he was slated to pick her up and a curling match ran late.

Vernon did more than volunteer; he helped to build the Cookstown Curling Club.

“My dad was an electrician and he did the wiring,” Vernon said. “Keith Robinson and I carried, must have been a mile or two of pipe into the building,” for the refrigeration system in the floor.

Shortly after his marriage to Brenda, Vernon joined the Georgian Bay Steam Association, and began volunteering for the club’s annual steam show, originally held in Collingwood and later in Cookstown.

The show was billed as a ‘Family Farm Demonstration Festival,’ and given Vernon’s strong agricultural roots, it’s not surprising that he would get involved – but that wasn’t the only attraction. Vernon was bitten by the collecting bug.

He began purchasing engines, and later farm equipment and tractors, at auctions and sales. “I just got interested,” he said.

Some of his ‘finds' were in rough shape, giving Vernon the opportunity to indulge in another favourite activity: restoration. After 35 years with a school board in general maintenance, his skill set included carpentry and welding.

Vernon served as both Vice President and a Director of the Georgian Bay Steam Club, and is currently Chair of the club’s vintage portable sawmill, spending long hours to ensure the saw is in working order for the annual Steam Show.

And that’s not the end of Vernon’s volunteer commitment. He is a Charter Member of the Bond Head Lions Club, joining 33 years ago – where he has served as President and Vice President “three times around,” and been involved in fundraising and various community projects.

Near and dear to his heart is Dialysis Camp Dorset.

Lions Clubs work together to support Camp Dorset, giving dialysis patients the opportunity to enjoy a holiday camping experience in northern Ontario, while maintaining access to life-saving medical treatment. Not only are there dialysis machines located at the camp, there are RNs and a doctor on hand to provide assistance and care.

For the past 22 years Vernon has been a Director of Lions Camp Dorset, and chair for three years.

“I think the most precious thing to Brenda and me is Camp Dorset. Our hearts are with that camp up north,” he said. Both Bill and wife Brenda have been chairs of Camp Dorset at different times, and are still involved in fundraising, encouraging donations through bequests.

Camp Dorset, unlike some charities, doesn’t have a huge payroll or administrative costs, he noted. Other than a camp supervisor and several paid RNs, everything is “all volunteer” - just like Vernon himself.

“It’s all worth it, I think,” he said of his long years of involvement. “I get great enjoyment in being a volunteer, by helping someone that’s less unfortunate.”

Watching kids grow and learn
Jan 2, 2020 8:00 AM
Comments
We welcome your feedback and encourage you to share your thoughts on this story. We ask that you be respectful of others and their points of view, refrain from personal attacks and stay on topic. To learn about our commenting policies and how we moderate, please read our Community Guidelines.