Bradford dad stepping up to the plate for the kids 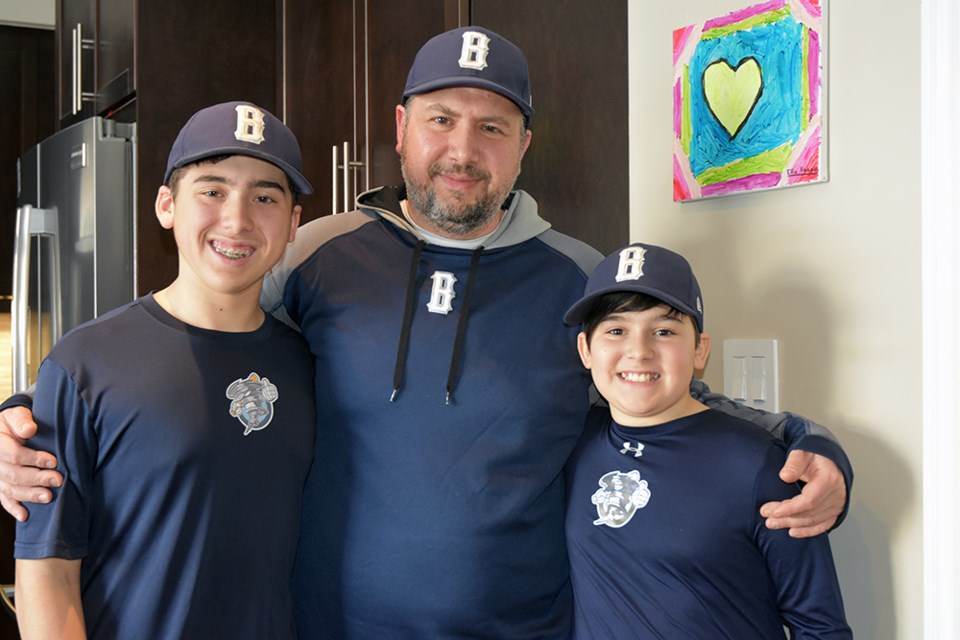 Donnie Censori has a simple reason for all of the hours he spends volunteering as Head Convenor, Rep and Select Convenor with Bradford Storm minor softball and baseball.

As convenor, he’s responsible for scheduling all games and practices, as well as arranging tournaments and away games. It takes a lot of juggling, a lot of logistics – and, he admits, it can be “a nightmare” trying to accommodate all the players.

His volunteer work isn't limited to “baseball season.” At this level of play, being convenor is a year-round job, with a full schedule of meetings, even in winter, for York-Simcoe Baseball and the OBA.

As if that wasn’t enough of a commitment, Censori says, “I also coach one of the rep teams,” the 14UAA.

His kids have also been involved in basketball and ball hockey, “but nothing competitive like they do in baseball.” he says, admitting that sometimes, “it feels like it doesn’t stop.”

He can be engaged in baseball four or five days a week – but he insists that it’s worth it.

“The kids obviously love the game,” Censori says. “I love the sport. I grew up watching the Jays. I played it when I was younger.”

And that’s the point. When he was a kid growing up in Vaughan, there were always volunteers who gave their time to ensure minor ball was accessible and fun for the young players.

He’s seen a lot of changes over the years. Although Bradford had a hardball league many years ago, that had faded away by the time his boys were ready to play. In fact, the boys left House League Softball in Bradford to play hardball with the Innisfil Cardinals – until about three years ago, when hardball returned to Bradford.

“Now it’s pretty strong. It was time,” he says.

Over the years, Censori has met “a lot of people who have given a lot to softball,” and that is one of the greatest benefits of volunteering.

“It’s a great experience,” he says. “You make a lot of good friends.”

Wife Simona agrees. “We’ve met a lot of beautiful families,” she notes. And although she doesn’t volunteer directly for the Bradford Storm, it’s only because she picks up the load around the house,that Censori can give his time so freely.

It’s all about family, in a way. Whenever Censori signs his teams up for tournaments, he looks not only for the level of competition, a quality baseball experience for the kids, he also looks for locales that can provide an entertaining visit for the whole family.

Because baseball is more than a sport - it's fun.

“Our closest friends we’ve met here, it’s been through ball. We’ve become like a family,” Censori notes, enjoying barbecues, New Year’s, even travel together. If not for volunteering, “we would never have met these people.”

The Bradford Storm can always use additional volunteers. In particular, the organization is looking for student volunteers, to keep the score at games – and incidentally earn their community hours. Check out the Bradford Storm website here for details.

His role as a volunteer can be a lot of work, Censori admits, but his kids think the commitment is “pretty cool”- and it has had a positive impact.  His oldest son is already an umpire – “You can ump at age 12,” Censori explains – and both have written reports and essays on what it is like to grow up in a baseball family.

“It’s giving back to the community, and it’s for the kids,” Censori says. “The kids need it. If they don’t have somebody to do all this stuff, they can’t play the sport.”

Local family knocks it out of the park with contribution to local baseball team and food bank
Apr 9, 2020 1:00 PM

From Community Meals to Treasure Sales, Bradford church volunteer finds time to give back
Mar 19, 2020 7:45 AM
Comments
We welcome your feedback and encourage you to share your thoughts on this story. We ask that you be respectful of others and their points of view, refrain from personal attacks and stay on topic. To learn about our commenting policies and how we moderate, please read our Community Guidelines.