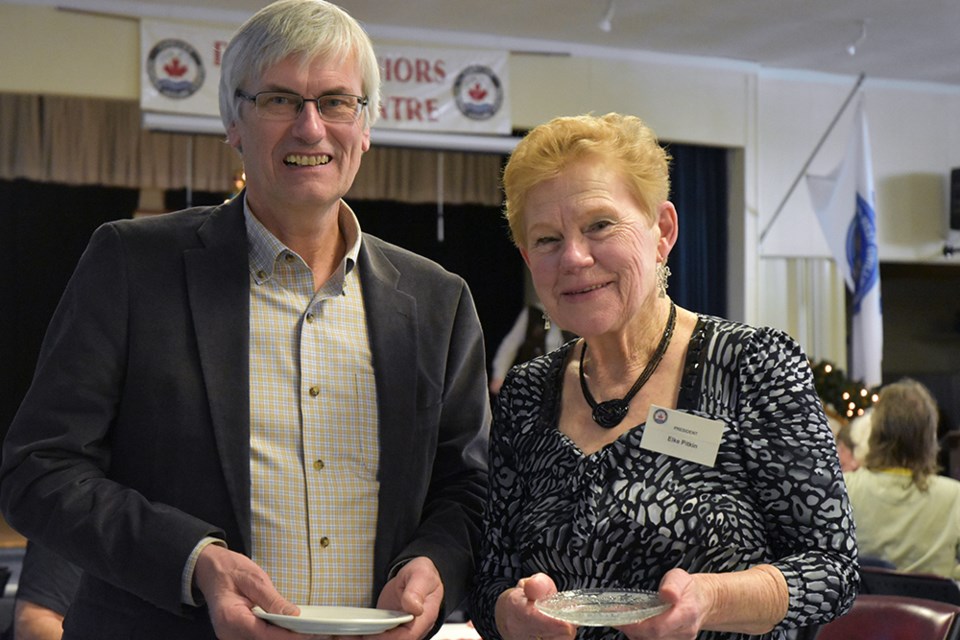 It wasn’t long before the couple found themselves involved not only as members of the Bradford West Gwillimbury Seniors Association, which operates the centre in partnership with the town, but as volunteers.

“I wasn’t there very long, and Sylvia (Luxton, founder and first president of the centre) cornered me for special events,” said Elke.

Bruce served as treasurer, until his failing health forced both to withdraw from the organization.

It was some time after Bruce’s passing before Elke returned to the Danube Centre, to the activities and friends that both had enjoyed.

And it wasn’t long before she found herself volunteering again – this time, in the kitchen.

The Danube Centre is famous for its monthly birthday lunches. One month, when the volunteer who normally provided the desserts was unavailable, Elke agreed to step in.

“I’m very good at getting 13 slices out of Costco pies,” she laughed. She not only started volunteering in the kitchen, she was asked to run for vice president, “and I said yes. Ever since then, I’ve been on the board.”

When president Gertrud Erdenberger moved away and stepped down, Pitkin became acting president, and then president, even while continuing to help out in the kitchen.

It has created a busy schedule. There are few days when she hasn't been at the Danube Centre, helping to organize and arrange activities for the growing membership, and on occasion serving as “unofficial chef” in the kitchen – cooking meals that include her famous cabbage roll luncheon.

Members wait for the announcement of the luncheon, which attracts record crowds and always sells out early.

Pitkin admitted that she isn’t sure why her cabbage rolls are such a hit. “When I make them for myself, they don’t taste that good,” she said, suggesting that it’s the large batch – hundreds at a time – and the “nice sauce” that make the luncheon extra special.

She doesn’t begrudge the time she has spent at the Danube Centre.

“If you want the place to continue, you have to step in. It’s key,” she said. “If you join, it’s up to you how much you get involved, and how much you get out of it. There’s activities, volunteering, any kind of help… If you need help, there’s always someone there to give you help.”

Pitkin recognizes the importance of the Danube Centre for the town’s senior residents.

“Especially for people who are alone, like me, it’s contact,” she said. “It’s talking to people, it’s laughing. It’s so structured every day – canasta, bid euchre, line-dancing and a luncheon...”

Of course, that was all pre-COVID-19. The pandemic has closed the Danube Centre, and other town-run facilities, and it has been a blow.

“All of a sudden, there was nothing,” she said - not only for Pitkin herself, but for the more than 400 members.

She can only hope that pandemic restrictions can be lifted at some point – once it’s safe.

Since the Danube Centre members are among the most vulnerable to novel coronavirus – elderly, many with underlying health conditions –  “we have to absolutely be safe about opening,” she said, which means taking things slowly.

In the meantime, while the centre is closed, she has been filling the hours reading, crocheting, making crafts, and working in a garden that has been neglected for the past two years, while she has devoted all of her time to the Danube Centre.

When the centre does reopen, will she be back as a volunteer? Without hesitation, Pitkin said, “Yes, of course!”