Leggings on women challenge all kinds of conventions about how they take up space with their strong and active bodies
0
Apr 22, 2019 9:25 AM By: The Conversation 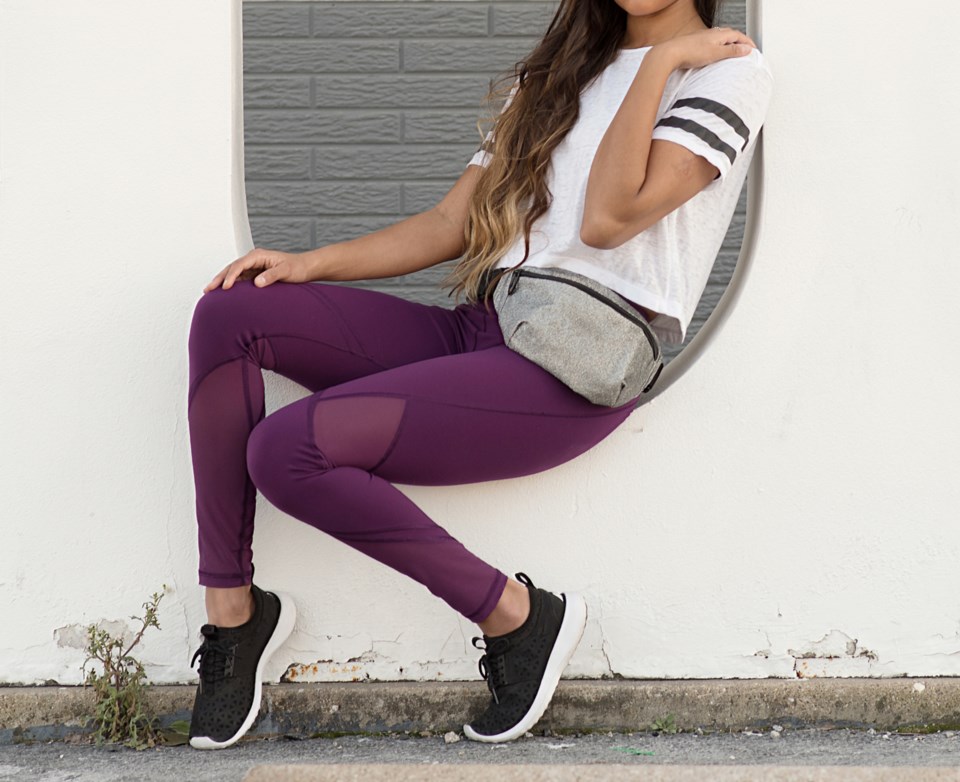 This article, written by Samantha Brennan, University of Guelph, originally appeared on The Conversation and is republished here with permission:

I’m writing this at my office computer wearing leggings and a short skirt. I wear the leggings because I ride my bike to work and they keep my legs warm. I add the skirt when I get to the office because most here would consider leggings alone inappropriate work attire for a middle-aged academic administrator.

After this week, it’s clear that some people don’t think they are appropriate attire for students on campus either. Maryann White, a mother of four sons, made news with her plea in a letter to the University of Notre Dame school paper that female students should stop wearing leggings and choose clothing that’s less form fitting. She worried her sons are being distracted and thinking disrespectful thoughts. She asked girls and women to make it easier for her sons by wearing jeans instead of leggings.

In response to White’s letter, social media feeds quickly filled with photos of women and men at Notre Dame (and around the world) wearing leggings, #leggingsdayND. Even The New York Times chimed in with Vanessa Friedman’s piece “It’s Possible Leggings Are the Future. Deal With It.”

One subject that gets everyone talking during my women’s studies feminism and fashion seminars is dress codes: school dress codes, summer camp dress codes and dress codes at the gym. My students say it’s hard to keep track. Does this place allow sleeveless tops? Can you show any midriff? Are there rules against yoga pants here?

Why all the fuss about what women wear? Women’s bodies and the clothes we wear are a battleground around the world. Some situations have rules that require religious body coverings and other places forbid those same coverings.

Leggings are only the latest focus for arguments deployed by conservatives since before ankles became a source of public scandal.

Maryann White said her concern was for her sons and their virtue.

Since we ought to treat other persons with respect, no matter what they wear, blaming leggings for her sons’ feelings fails to teach them responsibility for their thoughts and actions.

Her plea constitutes one small increment on the spectrum of responses that puts the blame on women for men’s lack of control and sexual violence. How often do we still hear the question, “Why was she dressed like that?”

When a woman is sexually assaulted, why does the public still think about her clothing choices? As if those choices provoke and justify violence.

White insults the integrity of her sons if she blames their actions and lack of self-control on women’s clothing choices.

There exists considerable gender asymmetry in clothing codes when determining what counts as uncovered or indecent. Women in leggings are fully covered. Men in shorts aren’t — their skin shows. Yet, there are no letters to the editor complaining that men in shorts are distracting to other male or female students.

Often complaints aren’t about clothes as much as about policing women’s bodies. Many leggings critics say they are fine if women with the “right bodies” wear them.

I began by mentioning age as a factor, but it’s also about size. Young women who get in trouble for wearing prom dresses that break rules are often larger women.

Women with small, “tidy” bodies rarely run afoul of dress codes. Women and girls with large breasts get in trouble over wearing certain tops at school. In the case of leggings, women with large bottoms are said to be doing something wrong. And fat women can never get it right. Some bodies break all the rules just by existing.

Why are leggings so ubiquitous? I wear them because they’re comfortable, easy to find, not size fussy and toasty warm in the winter. They’re also good for hitting the gym if I have time to spare between meetings.

I can run in them if I need to and bend any which way I want. Unlike skinny jeans, leggings give me a full range of motion, at least as much as this middle age frame allows.

Different items of clothing cause controversy because they spotlight aspects of women’s lives and bodies that make us uncomfortable. I think the backlash against leggings stems from our discomfort in seeing women in athletic wear in general.

Leggings are functional and practical. They make me feel a bit like a superhero, ready for action. Usually, women are tacitly rewarded for not taking up too much space, for being inconspicuous. Leggings, superhero-dom, can contravene those expectations in delightful ways.

The debate over leggings seems trivial. But, that’s another double bind for women and clothes choices. You’re not supposed to take fashion and clothes seriously even though our clothing and the codes and values our clothes transmit have tremendous social impact and make a real difference to women’s lives.

Whether our leggings are affecting vulnerable men should not be the question we are asking. It should be, why are these men so weak? And why does this woman feel it’s incumbent on comfortable bike-riding large and small superhero women to take care of her sons?