Each winter seems to provide a highlight at the feeder and this year, the tiny red-breasted nuthatch has chosen our area as its home base, says outdoors columnist
Nov 25, 2020 7:30 AM By: David Hawke 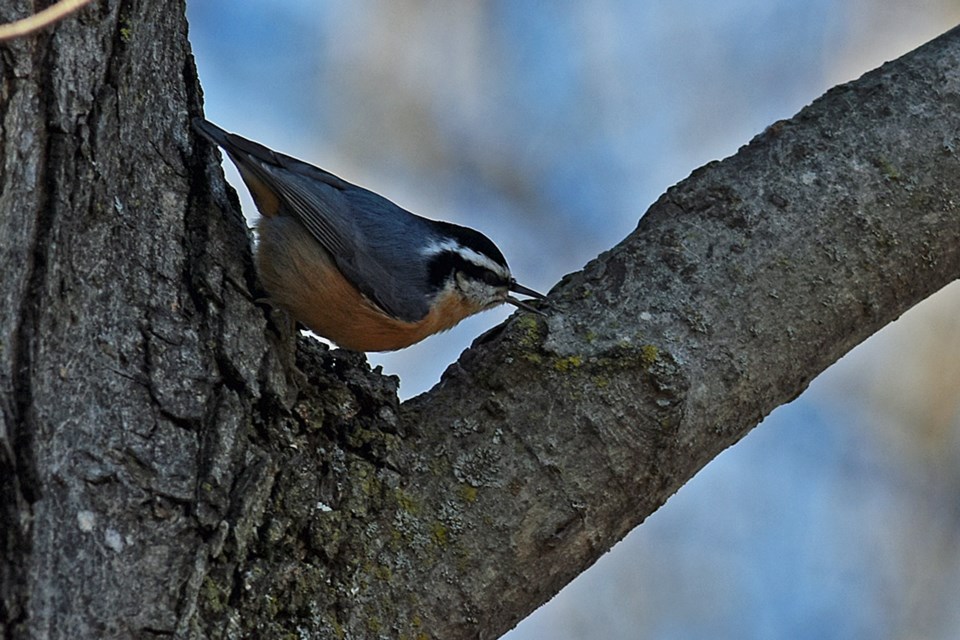 A red-breasted nuthatch comes down a tree to inspect a nearby bird feeder. There has been an increase in the numbers of these birds within our local area. David Hawke/OrilliaMatters

That last blast of snow no doubt encouraged you to get the bird feeders up and filled.

As usual for us, it took about two minutes for the first black-capped chickadee to show up. Within ten minutes there were a pair of blue jays checking the place out, and by sunset (which seems to come weirdly early in the middle of the afternoon) a flock of juncos had also settled in.

Although it’s been researched that wild birds obtain only 15 per cent of their daily food at feeders, one might question that data when the feathered gang shows up!

So far we have had a high of 12 species observed within a single day, and the highest tally being 48 birds. (But have to admit that 27 visiting wild turkeys helped bolster that particular number!). On average, we are seeing eight species and 15 birds per day.

Each winter seems to provide a highlight at the feeder, a bird that for some reason did not migrate, migrated in the wrong direction or became storm-blown and ended up in our neighbourhood.

We’ve had a varied thrush from British Columbia and an Oregon junco enjoy our seedy hospitality. Other special visitors are those whose populations and/or migration patterns fluctuate with weather and available food (or lack thereof) at their home habitat; these include northern shrike, evening grosbeaks and red-breasted nuthatches.

Last year and so far this year the tiny red-breasted nuthatch has picked our feeding stations as home base for the cold season. These birds tend to stay in the northern parts of our province, eking out an existence by eating natural conifer seeds and tree-eating insects. However, many reports show that the red-breasted nuthatch has shifted its winter range southwards.

Many readers are no doubt familiar with the other nuthatch species, the white-breasted, which lives here year-round.

Both have the unique ability to climb down a tree trunk head-first with great agility, checking out every crack and crevice of the bark for hiding insects. Being omnivorous, a nuthatch will eat a seed with the same relish as with a spider or grub.

Woodpeckers will cleanse a tree by going around the trunk, looking sideways for hidden morsels, the brown creeper climbs up the trunk looking at the underside of flakes of bark, and the nuthatches go down the trunk inspecting the upper side of those same bark flakes… the combined result being that the tree is thoroughly cleansed of insects and egg masses.

Many birds such as blue jays and chickadees will take a seed, fly to a branch and peck it open by holding said seed between their toes. However, nuthatches have their legs set too far back to touch their toes, so the pilfered seed is wedged into a crevice and is then hacked open.

Displaying little fear of humans, nuthatches can be readily observed. The white-breasted prefer hardwood forests and the red-breasted have a liking for conifer stands, but will be found outside their preferred habitat type.

Their quiet nasal calls are often the first give-away that they are in the area. Not as easily ‘trained’ as chickadees to take seeds from your hand, nuthatches have been known to do so if you have the patience.

As our climate shifts steadily from cool to warm, seed crops and insects are being affected by these new growing conditions. This in turn is causing the nuthatches to re-evaluate their living areas.

As the spruce trees of central and northern Ontario begin to dry out and die (as they appear to be doing) the birds will move their known ranges further northwards to follow the surviving stands of these conifer trees. This shifting of ranges may eventually result in fewer red-breasted nuthatches needing to come down to southern Ontario for their winter supply of seeds.

Your bird feeder can become a science research station if you record the avian comings and goings… in recent years many feeder operators have noted the arrival of cardinals and red-bellied woodpeckers, southern species once considered uncommon in north Simcoe County.

COVID-19: In the rush for coronavirus information, unreviewed scientific papers are being publicized
Jan 27, 2021 8:55 PM