Many families unaware of Chiari malformation as a possible cause for symptoms
0
Jul 11, 2018 11:30 AM By: Miriam King 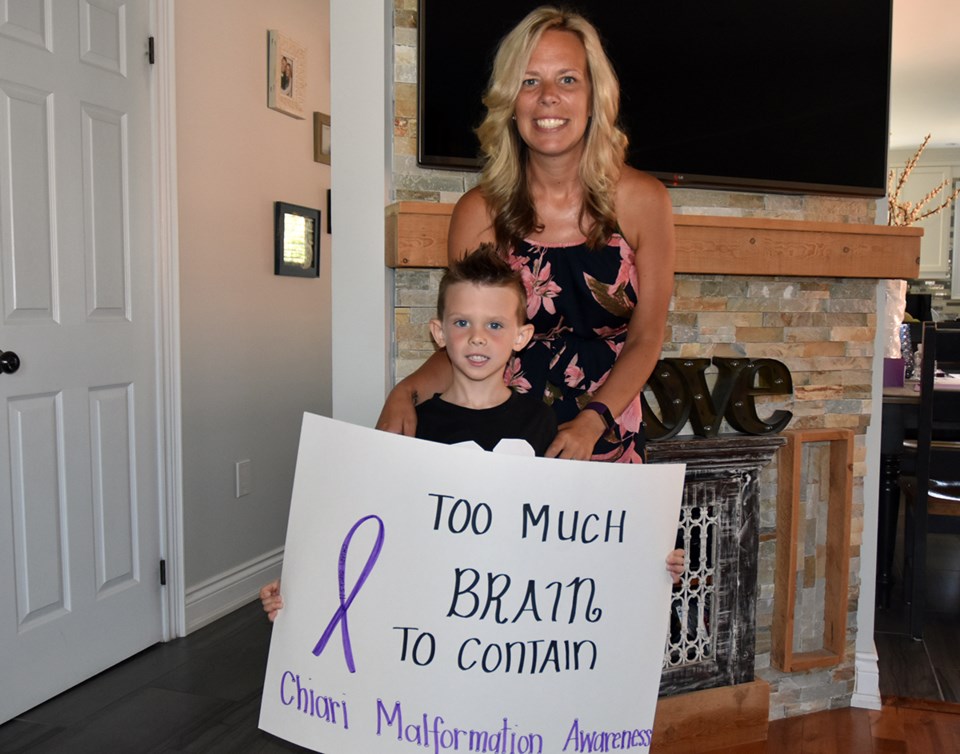 Mason Donkin and mom, Jennifer, are getting ready for the Walk for Chiari this weekend. Miriam King/BradfordToday

“Too much brain to contain!”

It is a snappy, light-hearted slogan, but it sums up a serious condition.

Chiari malformation (CM), which impacts an estimated one in 1,000 Canadians, is a structural defect of the base of the skull — a lack of room that can push the cerebellum into the spinal canal.

Six-year-old Mason Donkin and his family know all about it.

Mason was diagnosed with CM after years of puzzling symptoms.

The pressure on the cerebellum — the part of the brain that controls balance — and on the brain stem can lead to a wide range of symptoms, including headaches, neck and leg pain, balance problems, muscle weakness, dizziness, nausea, and insomnia.

His diagnosis opened the door to a possible treatment through surgical decompression, but it also launched the Donkin family on a mission to raise awareness of CM.

“It’s all making sense now,” said mom Jennifer. “It’s been issue after issue” that puzzled doctors and led them to prescribe a range of drugs and treatments, none of which worked.

“He suffered so much when he really didn’t have to,” she said.

The diagnosis took four years, and Mason is still undergoing genetic testing to determine the full extent of his condition, which includes possible Ehlers-Danlos Syndrome, which leads to weak connective tissue.

He now has a team of experts and is undergoing evaluation — but there are many families, and doctors, who are unaware of CM as a possible cause for their symptoms or a potential diagnosis.

That’s why the Donkin family has stepped up to share their own story, and, last year, held the first Walk for Chiari in Bradford West Gwillimbury.

They raised a total of $11,000 for Mason and the Hospital for Sick Children, and brought CM to the attention of their community.

The second annual Walk for Chiari will be taking place July 14 at the BWG Leisure Centre, starting at 11 a.m.

This year, it is a fundraiser for Sick Kids Foundation in support of a new Chiari Research Centre that will be the first of its kind in Canada.

There will be music, pizza, bananas, muffins, candy bars, face-painting, games, a silent auction table featuring donations that range from a TV set to a Miele vacuum cleaner — and the one-kilometre Walk for Chiari.

Mason is still waiting for a decompression surgery that could relieve his symptoms. Doctors are concerned that his Ehler-Danlos Syndrome will cause complications.

“He’s doing OK,” and handling his symptoms with incredible maturity for a six year old, his mom said.

Mason has explained his condition to his classmates at school and alerts his parents when the fatigue and muscle weakness are just too much.

“He loves school… but there are days when he really can’t do it.”

Chiari means “a lot of work, a lot of sleepless nights,” Jennifer said. “It takes a toll on us.”

To care for Mason, she has used up all of her sick days and family days available through her school board job.

Then there’s the cost of gas and parking at SickKids every time there is an appointment or test, not to mention the stress.

Jennifer said she has just been diagnosed with a stress-related heart condition.

Frustration is part of the picture. Like many families struggling with a rare, chronic illness, she has found a lack of co-ordination of services and medical support.

“We’re very fortunate that we have a lot of support in the area, from family and friends,” she said, but medically, it is as if Mason is helping to pioneer an approach to CM.

Medications, suppositories, probiotics, Advil and Tylenol for muscle aches, leg braces — it is a lot for any kid to handle.

The Donkins have received support from the community.

Mason’s school held a fundraising dance last year, and the BWG Fire and Emergency Services has made ongoing contributions for his care.

The family is also looking forward to a promised playhouse from the charity Million Dollar Smiles to be built next to the saltwater pool in their backyard.

The pool was installed to provide therapy for Mason, but also playtime with his three brothers and his friends, and to “just be a kid.”

Mason wants to be a firefighter when he grows up.

Jennifer said that sometimes she wondered if he will ever be strong enough, and then decided, “I think he will. I think he’ll just push through… God gave him this because he could survive it.”

For more information and to make a donation to the Bradford Walk for Chiari and Hospital for Sick Children, visit the event website.