The pool will require $142K in emergency repairs due to water loss issues and delaminating in the activity pool
Apr 19, 2021 2:00 PM By: Natasha Philpott 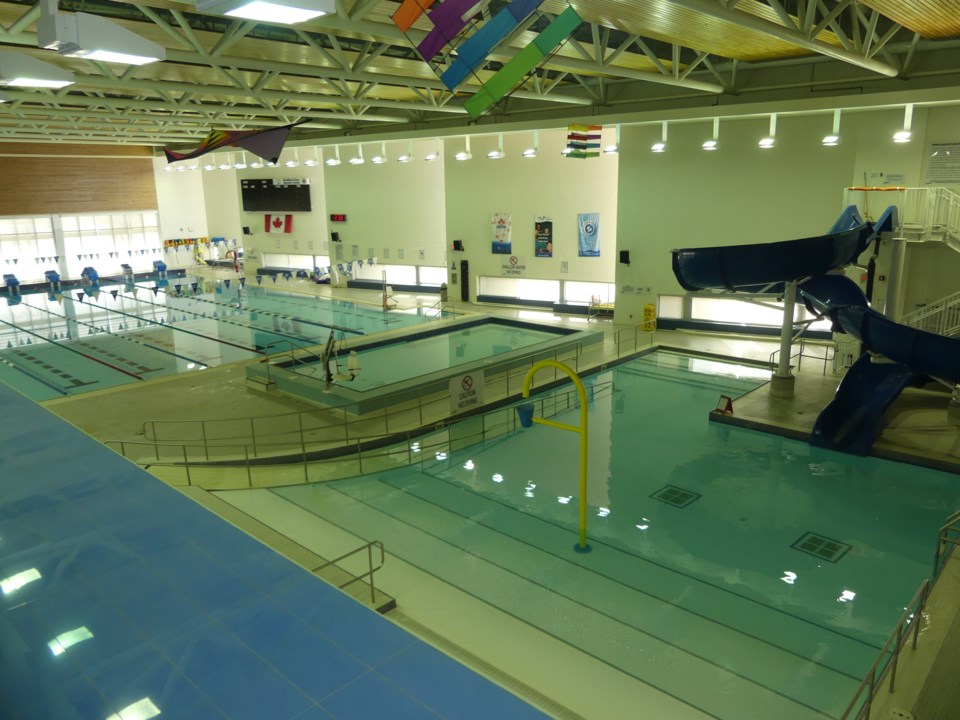 The activity pool at the Bradford West Gwillimbury Leisure Centre is in need of $142K in emergency repairs, due to water leakage and delamination of the vinyl liner.

The 2021 budget already had allocated $75K for repairs at the aquatics centre, including $45K to repair the tiles of the activity pool. It was when the water was drained for tile repair that further issues were discovered with the pool system.

The activity pool is one of three pools in the Bradford Lions aquatics centre. Located closest to the Leisure Centre's lobby area, it features a wading area and water slide.

Director of Community Services Terry Foran said issues like this are only found once water is taken out of the pool; when the pool is full, the pressure holds the system together well.

Foran explained that, with the water drained, "We have water in behind the walls within the aggregates, coming back out (and) delaminating the vinyl off the steel panel construction."

In last week's Special Committee of the Whole meeting, councillors approved an additional $70K to cover the cost of replacing the liner, as recommended by a pool technician. The new funds will be taken from the capital replacement reserve.

The replacement of the pool liner would involve knocking six inches of tile off the deck, replacing the vinyl liner, with new tile laid back on as a seal, then wrapped down the walls on the perimeter of the pool. The new liner will be vinyl welded to the steel pool basin.

"We believe this is the only way to understand if there is a further issue," said Foran. "We also don't understand if we do nothing, what the result would be."

He noted this isn't the first issue experienced with the pool system. Two years ago the hydrotherapy pool had broken hydro fittings behind the walls that required emergency repairs.

Foran told council that the water loss for the activity pool has been measured at about 350 gallons per day, but the issue is not related to the piping for the pool. Pressure testing determined that there were no leaks in the pipes.

"Which is very fortunate so we don't have to chase an underground break," he said.

Cracks were found within the fittings of the walls but Foran said they couldn't attribute them to the water loss problem.

"This is really the only solution we have at this time to remediate this pool," he said, adding that with further evaluation over time, they should be able recognize if there are any other potential problems.

"We want to try and get this remediated as quickly as possible to be ready to open when we are permitted to open," said Foran.

He noted there are currently some delaminations occurring in the larger lap pool at the Leisure Centre, which are being monitored.

Coun. Peter Ferragine said the work needs to be done, but pointed out that the pool is only eight-years-old.

"For the age of the pool, is this a common thing?" Ferragine asked. "Is this due to the fact that the way it was originally installed, or the workmanship wasn't that great in the beginning?"

Foran acknowledged that experiencing these types of issues within an eight-year time frame is unexpected. He noted that BWG is not the only municipality experiencing issues with this type of pool.

"I can say there are similar experiences from other municipalities with this system," he said, but couldn't go into specifics.

"It is unfortunate we are going through these problems," Foran said, explaining that the town is monitoring the actions of a number of municipalities that are now collaborating to find a solution to their pool problems.

"We'll learn from it, we will navigate it as we can," he said.

"I am anticipating that you aren't 100 percent sure that the liner will solve the problem?" queried Coun. Mark Contois, questioning if the main issue is the water loss or tile breakdown.

He added, "I think if you put a liner over top of what's existing and adhere it to the walls, it should seal it, so if water leakage was the problem, I think that will rectify that problem."

Foran noted that the loss of approximately 350 gallons of water per day is "not a massively significant problem, but it is a problem - and those problems don't typically lessen. They increase over time," which is why he was urging the emergency repairs.

As to whether the replacement of the liner will fix the problem, there are no guarantees, Foran said

"We could have other issues with deck tile," he said. "Maybe that water infiltration is coming from deckside due to splashing. It's very difficult to determine these things."

He concluded, "This is step one, and we're hoping step one will solve our problem."

Deputy Mayor James Leduc asked what the next step could be.

Foran said he would be interested in contacting the consultant who is currently working with other municipalities on their pool issues, but would first want to look at the resulting study, to determine if it there is value in retaining the consultant.

"I want to make that determination down the road," he said.

Asked about the possibility of going back to the vendor who installed the system, Foran noted the warranties on both materials and construction expired years ago.

"The supplier of the product will work with you but at full cost," he advised.

Foran emphasized the importance of the pools and the value they bring to community programming. Closing the activity pool for repairs "is a significant impact to us," he said, but at least the Centre has two additional pools which will remain in operation.

"Every one of these pools is very valuable to us," said Foran, promising to move forward quickly with the repairs, if authorized by council. "We will get it operating again, and then we will assess it."

Councillors voted to support the resolution, and authorize the use of the $75K already in the 2021 budget, plus an additional $70K, for the emergency repairs.