Bradford’s 9Round kickboxing gym struggles to keep afloat during pandemic 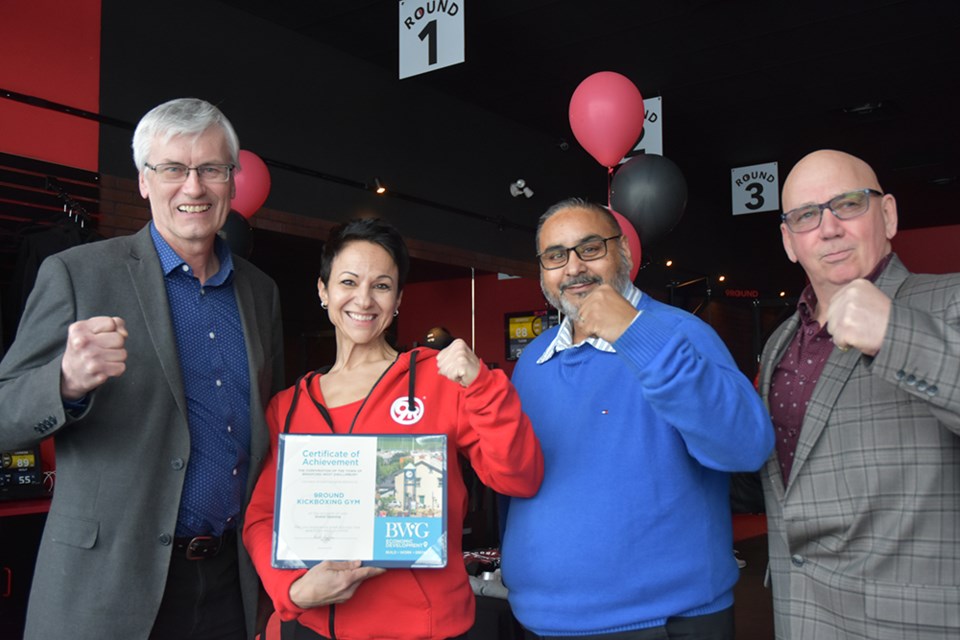 BWG Mayor Rob Keffer, left, was joined by Councillors Raj Sandhu and Mark Contois as he presented a certificate to 9Round Kickboxing franchisee Marina Imperio - fists in the air in February 2020. Miriam King/Bradford Today

Marina Imperio, owner of 9Round Kickboxing Fitness in Bradford, says the media hasn't done struggling businesses any favours as the pandemic perseveres.

"The government and media are scaring the public into thinking that gyms are a big problem,” says Imperio, who also owns another 9Round location in Aurora,  which is currently in York Region’s 'red' control zone. “I understand the science, but the data shows the opposite."

9Round Kickboxing Fitness opened its doors in Bradford on Feb. 28, just weeks before the devastating coronavirus lockdown.

“At the Aurora location, we’re going through the numbers with the accountant to see what makes sense,” she says. “We will make a decision at the end of this year… if the numbers don’t grow, we’re shutting down, we can’t survive!”

Like many other businesses, Imperio has been waiting for the province to pass Bill C-9, which will provide rent subsidies for small businesses.

“They know everyone is in trouble. Yet they’re still sitting on this," Imperio says.

According to the Fitness Industry Council of Canada (FIC), the “$4B industry is under intense economic pressure [and] at risk without adequate government support; Canadian’s are in real danger of losing many of their neighbourhood gyms and boutique studios."

Adds Imperio: "When you take a look at the data, out of 20 million workouts… the rate of transmission is .001 percent."

The FIC is a non-profit trade association that represents the voice of fitness facilities across Canada. Their top priority is keeping Canadian’s safe while focusing on physical and mental health.

“We know the positive impact exercise has on the physical, psychological, and social health of people and are committed to providing safe solutions,” says FIC president Scott Wildeman.

"We want to work as an active partner with government and healthcare officials and help them make evidence-based decisions to protect our members and employees — and keep our doors open."

But Imperio says she's trying to figure out the logic behind what the government is doing.

"We’re doing everything we can to keep the numbers low… they already have the data, so why continually force gyms to close and create this panic amongst the fitness sector?”

Imperio states that her business has suffered greatly, and she is left to consider difficult decisions; whether to stay open and continue to operate her business in a deficit every month or to close completely.

Ella Bennett is divisional manager of GoodLife Fitness for Bradford.

“Like many gyms and fitness centres, the GoodLife Bradford location has experienced challenges while facing the constant changes associated with the COVID-19 pandemic," she says. "But our team is doing an excellent job caring for our members and making the most of what we are able to provide the community."

Adrian Murphy, owner of REBELFit in Bradford says “we’re not in the red – thank God!”

Murphy shares that although the gym still experienced some “drop-offs” in membership, they are doing okay since the plaza’s landlord has been compliant and provided him with rent-relief in the interim.

“It’s hard when rent is due, and the rent isn’t cheap. For some commercial areas, that’s $10,000 a month,” Murphy says, adding that he understands Imperio’s dilemma. “She’s really hurting and I feel for her."

Bradford’s newest gym, Savage Iron, which was victim of a recent break-in, notes that despite the “smash” the gym has been able to sustain its memberships.

“We’ve been fortunate so far,” says James Whyte, owner of Savage Iron Gym. “Everyone is following protocols, but we’re also a different style of gym."

Whyte adds that physical health goes hand-in-hand with mental health and that the government is targeting the wrong industry.

In a recent TV interview, Imperio says she is not denying there’s a pandemic or its severity.