Check out the BWG Library's top picks of the week! 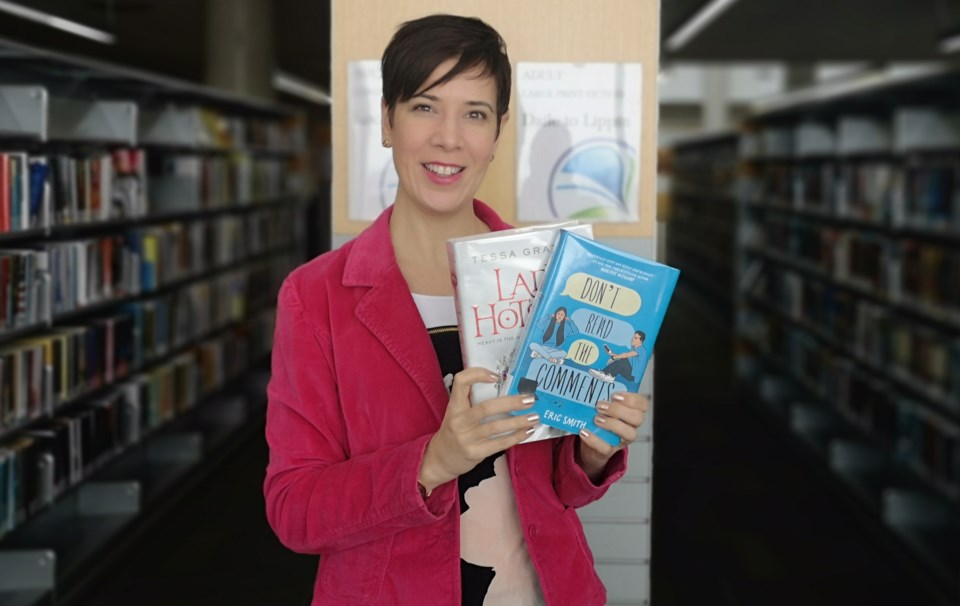 Larissa Marks, Community Engagement Coordinator for the BWG Library, shows some of the hot summer reads available from the library. Contributed photo

New titles are rolling in to the BWG Library every week now. Here are a few of the latest (and greatest) arrivals, with descriptions and staff recommendations!

Nina once bought into the idea that her fancy liberal arts degree would lead to a fulfilling career. When that dream crashed, she turned to stealing from rich kids in L.A. alongside her wily Irish boyfriend, Lachlan.

Nina learned from the best: Her mother was the original con artist, hustling to give her daughter a decent childhood despite their wayward life.

But when her mom gets sick, Nina puts everything on the line to help her, even if it means running her most audacious, dangerous scam yet. Vanessa is a privileged young heiress who wanted to make her mark in the world. Instead she becomes an Instagram influencer--traveling the globe, receiving free clothes and products, and posing for pictures in exotic locales. But behind the covetable façade is a life marked by tragedy.

After a broken engagement, Vanessa retreats to her family's sprawling mountain estate, Stonehaven: a mansion of dark secrets not just from Vanessa's past, but from that of a lost and troubled girl named Nina.

Nina, Vanessa, and Lachlan's paths collide here, on the cold shores of Lake Tahoe, where their intertwined lives give way to a winter of aspiration and desire, duplicity and revenge.

This dazzling, twisty, mesmerizing novel showcases acclaimed author Janelle Brown at her best, as two brilliant, damaged women try to survive the greatest game of deceit and destruction they will ever play.

Siiri at the Library recommends this psychological thriller.

After her former band shot to superstardom without her, Claire reluctantly agrees to a gig as a playgroup musician for wealthy infants on New York's Park Avenue.

Claire is surprised to discover that she is smitten with her new employers, a welcoming clique of wellness addicts with impossibly shiny hair, who whirl from juice cleanse to overpriced miracle vitamins to spin class with limitless energy.

There is perfect hostess Whitney who is on the brink of social-media stardom and just needs to find a way to keep her flawless life from falling apart. Caustically funny, recent stay-at-home mom Amara who is struggling to embrace her new identity. And old money, veteran mom Gwen who never misses an opportunity to dole out parenting advice.

But as Claire grows closer to the stylish women who pay her bills, she uncovers secrets and betrayals that no amount of activated charcoal can fix.

Filled with humor and shocking twists, Happy and You Know It is a brilliant take on motherhood – exposing it as yet another way for society to pass judgment on women – while also exploring the baffling magnetism of curated social-media lives that are designed to make us feel unworthy.

But, ultimately, this dazzling novel celebrates the unlikely bonds that form, and the power that can be unlocked, when a group of very different women is thrown together when each is at her most vulnerable.

Lisa Hudson feels more alive than she has in a long time after hiring hunky carpenter Mack Whitney to renovate her old Nantucket home. There's no denying the spark growing between them--despite the fact that Mack is ten years her junior.

But her twentysomething children, Juliet and Theo, on the island for the summer, worry that the new relationship will only lead to Lisa's heartbreak. Yet Juliet and Theo are in for tangled love stories all their own.

When dreamy Ryder Hastings moves to the island to pursue a new environmental venture, Juliet feels an unwelcome attraction, her rocky romantic history pushing her to steer clear of love.

Theo only has eyes for Mack's daughter, Beth, with whom he was bound by an unspeakable tragedy in high school--but can they overcome their past?

By August, when an impending storm threatens to shatter the peace of the golden island, everyone discovers what they can and cannot control. Nancy Thayer dazzles again with this new tale of a magical summer.

Antonia Vega, the immigrant writer at the centre of Afterlife , has had the rug pulled out from under her. She has just retired from the college where she taught English when her beloved husband, Sam, suddenly dies. And then more jolts: her bighearted but unstable sister disappears, and Antonia returns home one evening to find a pregnant, undocumented teenager on her doorstep.

Antonia has always sought direction in the literature she loves--lines from her favourite authors play in her head like a soundtrack--but now she finds that the world demands more of her than words.

Afterlife is a compact, nimble, and sharply droll novel. Set in this political moment of tribalism and distrust, it asks: What do we owe those in crisis in our families, including--maybe especially--members of our human family? How do we live in a broken world without losing faith in one another or ourselves? And how do we stay true to those glorious souls we have lost?

In this new installment in the New York Times bestselling Brad McLanahan series, Russia and China have teamed up to gain dominance in outer space, and it's up to McLanahan and the newly formed U.S. Space Force to stop them.

Because its enemies never stop trying to undermine the United States' security, the men and women who serve to protect America must always be vigilant. Few know this better than warriors Brad McLanahan and Nadia Rozek. Newly married, the two are just beginning to settle into their new life together when they are called back into action.

Though the Russians were badly defeated by Brad and the Iron Wolf Squadron in their previous bid for world dominance, they are back and doubling down on their quest for control of outer space. In addition to their cutting-edge weaponry, they have a formidable new ally: China's energetic and ruthless leader, President Li Jun.

To protect America and the rest of the free world from the Russians and the Chinese, the Americans plan to mine the moon's helium-3 resources, which will allow them to fully exploit the revolutionary fusion power technology Brad and his team captured from the Russians aboard the Mars One weapons platform.

But Leonov and Li have devised a daring plan of their own. They are building a joint secret base on the moon's far side fortified with a powerful Russian plasma rail gun that can destroy any spacecraft entering lunar orbit. If the heavily armed base becomes operational, it will give America's enemies control over the world's economic and military future.

As this latest skirmish in the war for space accelerates, Brad, Nadia, and their compatriots in the Space Force must use their cunning and skill--and America's own high-tech weaponry--to derail the Sino-Russian alliance and destroy their lunar site before it's too late for the United States ... and the entire world.

BEYOND LOCAL: Some COVID-19 patients report hair loss months later
Aug 13, 2020 9:25 AM
Comments
We welcome your feedback and encourage you to share your thoughts. We ask that you be respectful of others and their points of view, refrain from personal attacks and stay on topic. To learn about our commenting policies and how we moderate, please read our Community Guidelines.