COLUMN: Why did the turtle cross the road? You better read this! 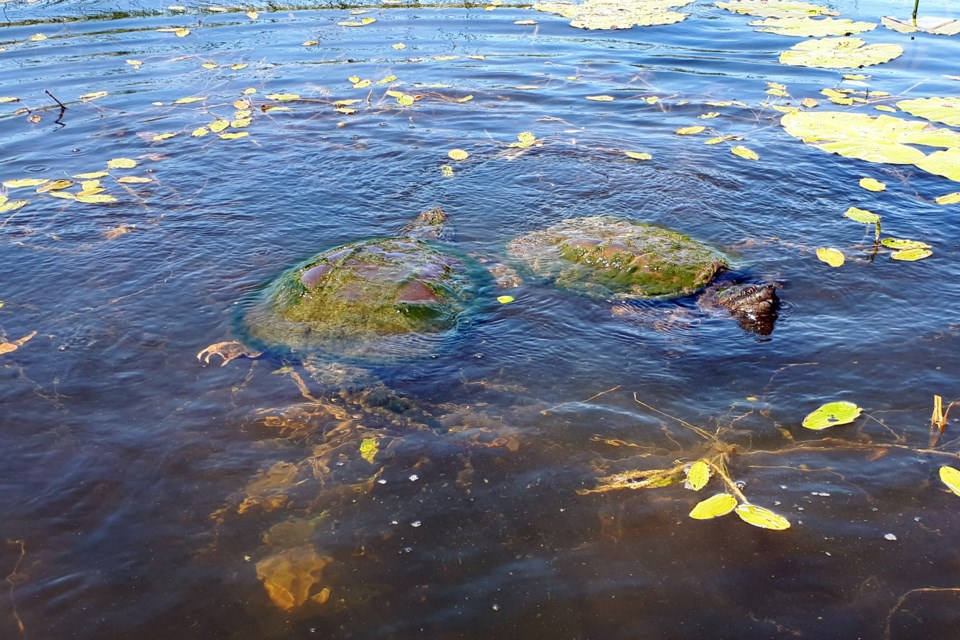 These snapping turtles engaged in a bit of a wrestling match in the Tiny Marsh.David Hawke/OrilliaMatters

Throughout June you have a very good chance of seeing a female snapping turtle sitting on the shoulder of the road. Hopefully it is still alive and in one piece when you see it… because sometimes they are not.

Both snapping turtles and painted turtles lay their eggs in late spring, preferably in a sandy or light gravel substrate. Roadside gravel shoulders are perfect turtle nurseries, it’s as if they were designed for everything a turtle had in mind: easy digging, good sun exposure, close to a wetland.

Of course the cars and trucks that utilize these turtle areas seem to have low regard for hard-shelled critters that are busy trying to ensure that future generations of turtles shall be born (read: hatched).

Nests cannot be dug deep enough in other soil types, nor in a place where there is less than near constant sunlight.

If all goes according to the maternity plan: the mama turtle scoops out a vase-shaped hole in the gravel, lays 12 to 20 ping-pong ball-sized eggs, pulls the gravel back over the nest, and beats an exhausted retreat back to the swamp.

Now it’s up to Mr. Sun and Master Time to ensure baby turtles show up in the autumn.

Interesting fact: the laid eggs are neither male nor female. Gender is determined by the temperature of incubation, with the eggs near the top of the nest generally becoming female, while the eggs in the cooler lower level of the nest become males.

This male/female split works well in the autumn when the babies hatch and head out on their own. The first ones to emerge from the top of the nest are the girls and they have an uncanny ability to know where to start walking to hit water.

Along the way they have avoid raccoons, skunks, foxes, gulls, crows, cars and eleven-year old humans who want to set up a home terrarium for their new pet turtle.

If the first ones to leave the nest can do so with some stealth they have the best chance of making it to the protective cover of water, whereas the latter emerging babies (the males) are likely to be the ones picked off by predators who have now noticed movement in the grasses.

If a pond has lots of females and only a few males, that’s OK. Turtles do not pair up for life and mating is by chance encounter, so a male who patrols the entire pond will be enough to ensure that several females will be carrying eggs in no time.

Another interesting fact: snapping turtles can carry the sperm from a male for several years, waiting until conditions are just right to allow for egg development. So, as befalls many other species, the annual chore of finding Mr. Right at just the proper time is not really necessary.

If the pond population is heavy with males this known as a biological surplus… a weird situation Nature has imposed upon these reptiles.

As males seldom leave the safety of the pond they rarely become prey or road kill victims, whereas the females risk their lives to foray into the great Unknown to find a nesting site. If a lot of road-kills happen, it is the female population that declines.

So what do the males do all year long? Well, outside of looking for Ms. Right, they just grump around the pond, finding food and ensuring another male has not wandered into his shallow end of the pool.

While out and about in my canoe last week, I witnessed a natural event seldom observed by mere humans… turtle wrestling!

Two large snapping turtles had literally swam into each other within a narrow channel and were having the Dickens of a time proving to the other which one was the superior being. As you may know, snapping turtles have very powerful and fairly sharp jaws, and a good set of neck muscles!

As it happened, I was just drifting along in the canoe, barely moving actually, when the water began to broil beside me! Bubbles broke the surface and a circle of small waves appeared when suddenly a two-headed snapping turtle emerged from the depths! Now here’s something to get a picture of!

A closer look revealed that it wasn’t quite the abnormality I first thought, as it was actually one snapping turtle with a firm grip on the throat of the second! Okay, still worth while getting the camera out of the pack.

For the next 20 minutes these two males went at each other, but rather than a skin-ripping, muscle-tearing prehistoric battle of B-movie proportion, it was more like watching an aquatic Sumo wrestling match: lots of glaring, lots of sizing up each other, a lot of just drifting around. Then one would blow a lungful of bubbles (kind of like a warning snort, I think) and take a lunge at the other.

They would then grapple for a couple minutes, trying to get a better position so as to… do what? Drown the other? Make the other go away? Whatever the intention, it wasn’t working.

After spinning and rolling for a bit they would break apart and start their slow eye-to-eye circular drift all over again.

This was fascinating to watch… for a while. The sun was baking me in the canoe and neither turtle was indicating any sign of backing down.

As I paddled away I heard another blast of bubbles and a splashing of water behind me. Yeah, they weren’t going to stop anytime soon. Unless some alluring Ms. Snapper came swimming by.