Councillors delve into the merits of rubber versus plastic wheels, colours and size of bins, and different locking mechanisms
Nov 25, 2020 9:00 AM By: Jessica Owen 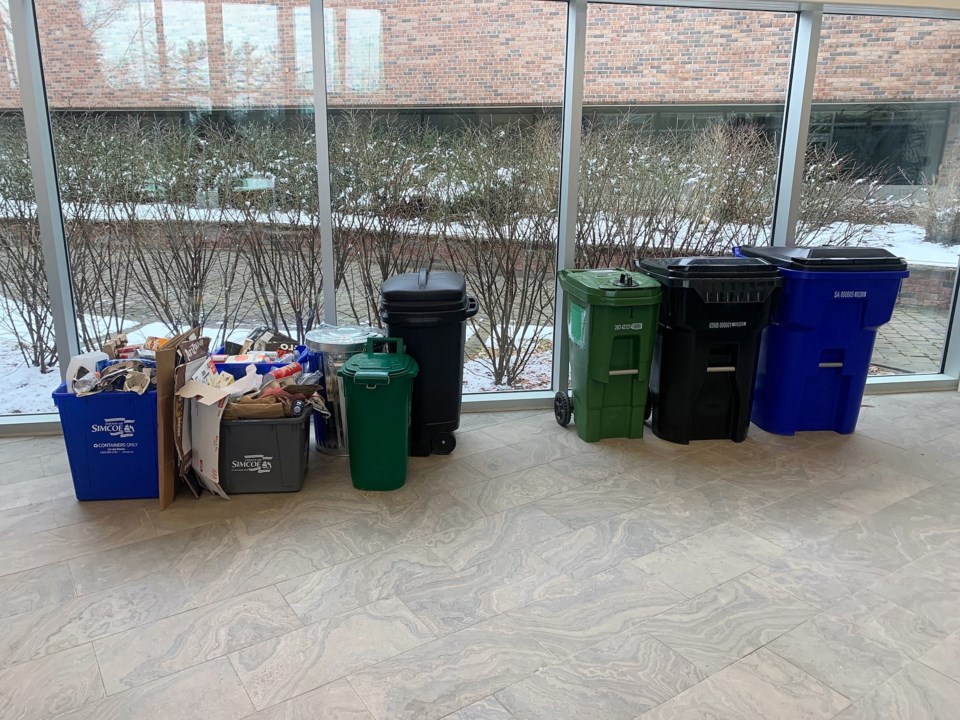 Samples of the new bins that would be procured for use in homes across Simcoe County starting in Nov. 2021 are pictured on the right. County councillors voted to obtain black bins with green, blue and black lids (for organics, recycling and garbage respectfully) in order to save on costs. Contributed image

During their lengthy seven-hour committee of the whole meeting, county councillors were presented with proposals from three proponents to provide new carts for the new automated waste collection contract, slated to start in November 2021.

Councillors considered the pros and cons of each proponent who submitted a bid for the possible $31.5-million contract, discussing the merits of rubber versus plastic wheels, the colours and the size of bins, and different locking mechanisms. Proponents were kept anonymous in the staff report.

“This is a very hot topic on social media. From my perspective in my community, everybody in Simcoe County thinks it’s terrible, but everybody who has lived in a place that has had it before and has moved here has said it’s the most wonderful thing in the world,” said Innisfil Mayor Lynn Dollin. “It shows to me that change is hard, but once people have it they do, very much, appreciate it.”

In June, county council approved the move to the new automated cart collection system to be implemented in late 2021. The collection contract was awarded to Miller Waste Services.

“According to the report, I could save 1.9 per cent on the colour or wheels, but I don’t understand what those numbers really mean," he said. "Where are the numbers that I need to help me make this decision? The only thing in this report that I see says it’s ‘well under the budget number.’ When I open the budget book, it’s a $31.5 million ask. That’s a huge number.

“The public has to be aware of what the cost is. If we’re going to spend $31.5 million, I need to know that I’m spending the money for the right reasons,” Leduc added.

Rob McCullough, the county's director of solid waste management, said the recommended proposal came in well below the $31.5-million figure estimated in the 2021 budget, which was also passed during Tuesday’s meeting.

“Many of the costs are dependent on the recommendations that are before you today,” said McCullough.

Willma Bureau, the county's contracts and collections supervisor, further clarified that with council voting in favour of the staff recommendation, the costs were estimated to come in at 28 per cent less than budgeted.

During a nearly three-hour discussion, councillors raised resident concerns, such as the size of the bins, how people living in townhouses were supposed to fit the bins in already small spaces, how residents in rural areas were supposed to drag larger bins, how disposal of old bins would be taking place, how the county would be providing repairs to broken bins and how locking mechanisms would work to keep out animals.

The recommendation from staff – which was approved by council during committee of the whole, but will need to be ratified at the next council meeting – was as follows:

Bureau also said there would be options to obtain bear-proof bins that would be assessed on a case-by-case basis for residents living in more rural areas.

According to the staff report, once contracts are signed, a major communication campaign will start to educate the public on the new system prior to the launch in November 2021.

COVID-19: In the rush for coronavirus information, unreviewed scientific papers are being publicized
Jan 27, 2021 8:55 PM
Comments