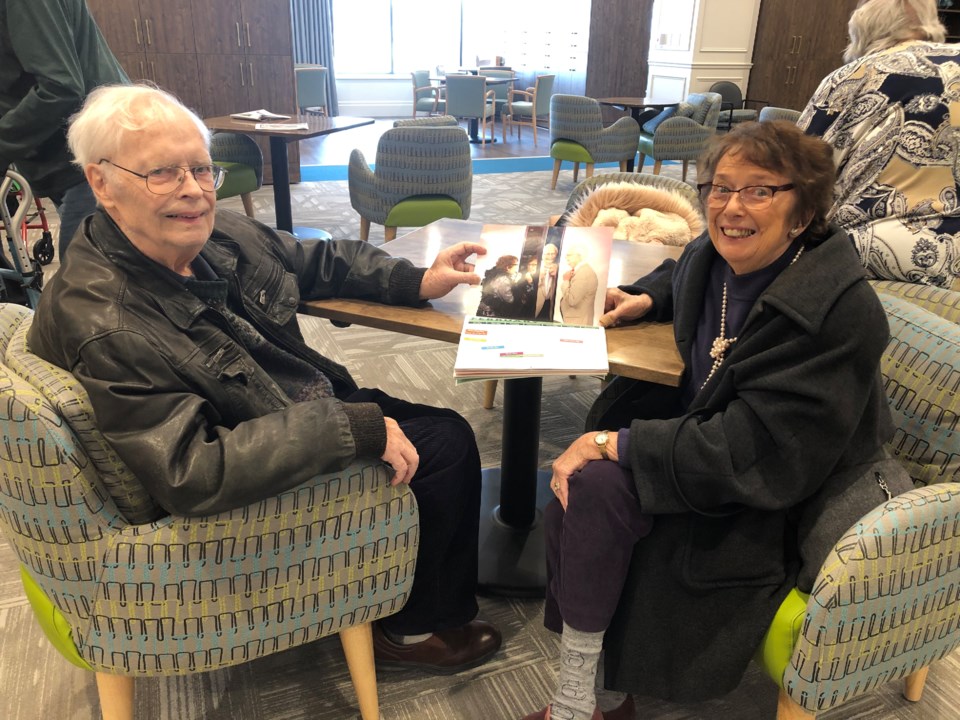 Len and Lyn Hayes have been married for 62 years and moved into the Elden when it opened in January 2019. Natasha Philpott/BradfordToday

This week is Valentine’s Day and BradfordToday will be featuring local couples, sharing their love stories and key tips for a successful relationship

It wasn’t love at first sight for Bradford couple Lyn and Len Hayes.

But the couple, who have been living at The Elden in Bradford since it first opened its doors in January 2019, have been married now for 62 years.

Both originally from England, the pair ended up meeting through a mutual friend in 1957 in downtown Toronto.

Len was working in the publishing industry, and Lyn was working at a company in England with branches all over the world.  Lyn had applied for a transfer, she wanted to work at a branch in South Africa, but was told she would be transferring to a branch in Toronto instead.

“I gave her a ring and she said ‘Not bloody likely,’” remembers Len.

To Lyn’s defense, she had only been in Canada for under a year, and wasn’t sure she wanted to stay in Canada yet.

Eventually, Len convinced her, and the pair got hitched shortly after in 1958 in a small church in downtown Toronto.

In 1960 they welcomed their first baby boy, followed by another son a year later, and a few years after that, a daughter.

The couple lived and raised their family in Oak Ridges in York Region, north of Toronto, living on 2.5 acres of property with wildlife in their backyard, including wild turkeys and foxes.

“We had a lot of fun,” reflected Lyn on their life in the Oak Ridges.

Len worked in the publishing industry and in 1978 decided to make an investment in a printing company.

“He went away for one weekend in Ottawa and came home and said ‘I bought a printing company,” Lyn remembered.

The company was a smart business investment for the family, with Lyn working as the bookkeeper, and eventually having their three children coming on board to work for them.

‘How did you find working with your husband and three children?’ was a question Lyn said she was often asked, to which she replied with a laugh, “I don’t talk to them.”

They were successful in their business and eventually sold the company in 2001.

When the company sold, Len bought Lyn a circle gold pendant, one side reading “Lyn, You Made It All Possible, Love You So, Len'' and the other side, and a printer on the other. She wears it everyday.

The couple is well travelled, having visited a number of places over the years, one of their favourites being Africa.

“It was probably the most interesting,” described Lyn.

The couple even climbed Mount Kilimanjaro together. “We got further than half way,” explained Lyn.

They enjoy their new lifestyle at The Elden, making friends and participating in the social activities and events.

“Chad keeps us extremely busy,” said Lyn about the activities coordinator Chad Axelrod at The Elden.

“It’s a very nice place and the people are nice,” she added.

She noted last week the pair were even learning to speak Mandarin.

Their relationship has stood the test of time, going through many of life’s highs and lows by each other’s side.

Both have battled through some serious health issues over the years, and are just happy to have each other and their children living close by in Innisfil and Bradford, and their new cat Sophie, who they adopted from Kate and Me Cat Rescue just last month.

“We see them all the time,” said Lyn, noting they just celebrated their youngest great-grandchild's first birthday.

This Valentine’s Day, Lyn and Len will be spending the day together, with Len making sure to pick up roses from Linda’s Floral Designs in downtown Bradford.

“He buys me roses every month” gushed Lyn.