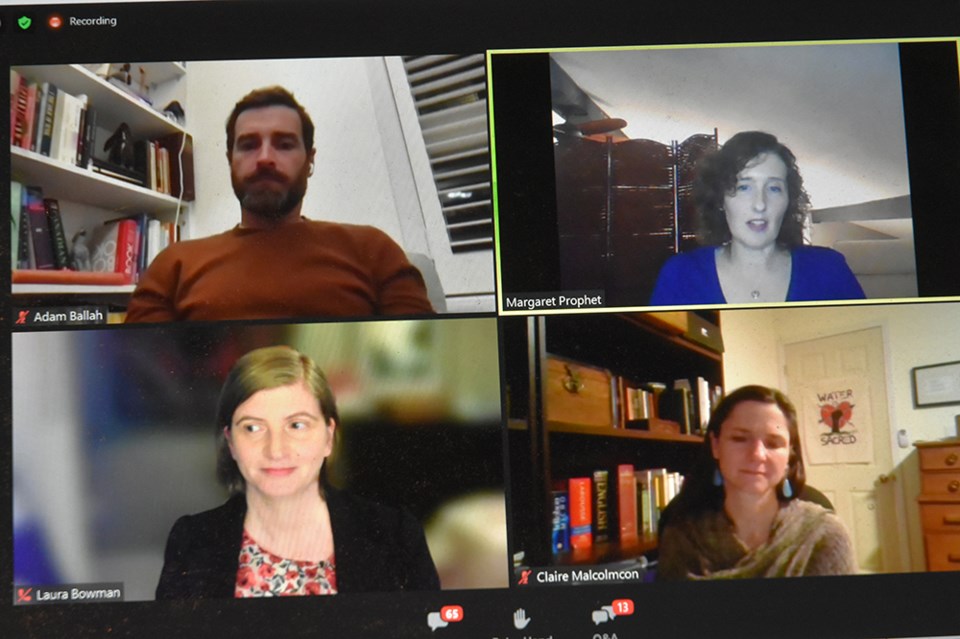 Editor's Note: A response from Minister of Transportation Caroline Mulroney was added on March 18

Decisions pending on the proposed Bradford Bypass, a 16.2 km limited-access highway that would link Highways 400 and 404, the Bradford Women’s+ Group hosted an online community discussion, moderated by Margaret Prophet of the Simcoe County Greenbelt Coalition.

Panelists included Claire Malcolmson, executive director of the Rescue Lake Simcoe Coalition, and Laura Bowman, Senior Counsel for EcoJustice – and the questions they raised centred around what was described as an incomplete, inadequate and outdated Environmental Assessment process for the Bypass.

Malcolmson noted that the proposed east-west route of the highway lies north of Queensville Sideroad in East Gwillimbury, and south of Line 9 in Bradford West Gwillimbury – and cuts through environmentally sensitive lands that have Greenbelt designation, near the mouth of the Holland River.

The lands are close to Lake Simcoe, and Malcolmson suggested they should be protected under the Lake Simcoe Protection Plan (LSPP).

The LSPP, currently under review, contains 118 policies - in particular, protection for natural heritage features, fish and migratory bird habitat, all of which are threatened by the new highway, Malcolmson said.

“We really need to protect natural heritage better in the watershed,” she told the 77 or so participants who registered for the virtual event, and described the Bypass as yet another stressor on the health of Lake Simcoe.

There is also the question of Greenhouse gas emissions and climate change.

“This relates to the Bradford Bypass, because it is a highway and it will promote more driving,” Malcolmson said. Use of personal vehicles already accounts for 54 percent of the greenhouse gas emissions that underlie climate change.

The far-ranging discussion touched on urban sprawl, the Upper York Sewage Solution, and Innisfil’s Mobility Orbit, a planned community of potentially 150,000 people on the shores of Lake Simcoe, that has applied for a Ministerial Zoning Order – all of which continue to put pressure on Lake Simcoe.

“We have to start looking at this from a cumulative impact,” said Prophet.

Malcolmson acknowledged that Ontario Minister of Transportation Caroline Mulroney has framed the project in terms of COVID-19 economic recovery, and has promised that environmental concerns will be addressed.

“I’m pretty irritated by this,” said Malcolmson, describing Mulroney’s comments, and statements of support by other levels of government, as “basically baseless.”

A comment by BWG Mayor Rob Keffer, expressing his confidence that the province is “undertaking all due diligence, including some 15 environmental studies,” also came in for criticism.

“Is this the best we can do?” said Bowman, suggesting that there are other options to address the region’s transportation needs.

Bowman noted that the original Environmental Assessment was begun in 1997, and not completed until 2002 – over 18 years ago.

At the time, there was no Climate Change impact assessment required, no study of the impact on migratory birds or fish habitat undertaken, no noise and vibration assessments, and no Stage 3 Archaeological study, despite the possible presence of both colonial and pre-colonial archaeological sites.

Even more importantly, Bowman said, “It did not consider any non-highway options to improve the road network.”

She suggested that the province is now proposing exemptions that could mean that the 15 environmental studies won’t be done, and that construction, e.g. of bridges, could begin even before the EA is updated.

“Where is the current information? We’re talking about studies that are 20 years old,” Bowman said. “Do we still need it?”

She spoke of all-day, two-way GO Train travel (which has yet to be introduced to the area), and suggested that Bradford West Gwillimbury should look at “alternate access routes” – routes that she identified as cutting through the Holland Marsh agricultural specialty crop zone, south of Bradford, to link up with Highway 9 and Green Lane.

“We know that highways are not a solution to traffic congestion. Highways cause more congestion,” Bowman said. “We cannot meet our Paris targets if we keep building highways… Highways cause people to drive more. There’s tonnes of evidence of this.”

Bowman also noted that health problems have been linked to proximity to major highways, and that residents within 100 metres of highways are exposed to intense nitrogen oxides and benzene concentrations that “can cause Alzheimer’s, heart disease, pre-term births and low birth weight, lung disease, and it can also exacerbate COVID-19.”

All of the speakers encouraged the public to write to their MPPs and members of council, to “educate them about the risks.”

Prophet again singled out a comment by Mayor Keffer, who had argued that the Bradford Bypass would reduce congestion through Bradford, and reduce Greenhouse Gas emissions by alleviating the bumper-to-bumper rush hour traffic – “and I just went, what?” said Prophet. “Highways are just a non-starter. We can no longer accept that highways are a net benefit.”

In answer to a question, Bowman suggested that recent changes to the expropriation act will make it easier to take homes for a highway, eliminating the need for a hearing to determine if the project is necessary.

“They are going back to the 1970s, specifically for this highway… So yes, they can take your home, just special for this highway and other highways,” said Bowman – although one participant pointed out that the route for the Bradford Bypass has been frozen, protected from development.

Malcolmson responded to criticism that the use of the term “Holland Marsh Highway,” rather than Bradford Bypass, is misleading.

She acknowledged that the highway does not impact the Holland Marsh specialty crop area south of Bradford and Holland Landing, but argued, “The whole area, all the way up to Lake Simcoe – it’s all called the Holland Marsh.”

“I’m not willing to debate it,” added Prophet. “This issue is bigger than what we’re calling it.”

There was also a suggestion that the Bradford Bypass would ultimately have a largely negative impact on businesses in downtown Bradford.

“It would reduce traffic congestion, but there are lots of other solutions,” said Malcolmson. “Let’s fix the traffic snarl, but we don’t need to gut downtown Bradford… Let’s push pause, and come up with a better solution for a traffic jam.”

All of the speakers called for an updating of the environmental studies, and the initiation of a federal E.A., to look at the actual and cumulative impacts of the highway on sensitive ecosystems.

They urged participants to express their views to local politicians and media.

“When politicians feel the heat is on… the personalized contact with the decision-makers makes a difference,” said Prophet.

“Just write them a letter. There’s too many questions,” said Malcolmson.

Bowman continued to argue that a solution would be to “distribute the traffic to the ‘regional’ road system,” displaying a map of new road links cutting through the Holland marsh polder. “It’s not fair to say this highway is the only way,” she said, claiming that actual savings in commute time would be “marginal… 60 to 80 seconds.”

Mayor Keffer, who was in a council meeting on Tuesday night, took exception to the suggestion that traffic should be diverted through the agricultural area of the Holland Marsh.

“A controlled-access highway is the best way to limit traffic on local and regional roads,” Keffer said. “The agricultural community is in support of the Bradford Bypass because the traffic volumes on concession and rural roads is harming farming activities.”

As for the suggestion that the province can't be trusted to carry out the updated studies, the BWG mayor said, "I have been assured that new Environmental Impact Studies will be done. These studies will be taking into account new legislation and the standards in place currently."

In a response to the pushback, Minister Mulroney noted the project has been something commuters in the area have been demanding for decades.

"When you consider the tremendous population growth York Region and Simcoe County have experienced, there is little doubt on the need to invest in transportation infrastructure for the region," she said.

"As confirmed in Ontario’s 2020 budget, our government is moving forward on the Bradford Bypass and believes it will be a critical project to alleviate congestion, strengthen product pathways, and boost Ontario’s economy. We know congestion is a major contributor to greenhouse gas emissions, and as the population grows, we cannot afford to delay planning for this corridor.

"The current Bradford Bypass Preliminary Design and Environmental Assessment update began in September 2020.  As part of this project, MTO will gather information about environmental conditions, predict and mitigate impacts to the extent practicable, consult with the public and stakeholders, consult with Indigenous peoples, and document decision-making. These processes are prescribed by law and will be followed to the letter.

"Strong environmental oversight will always ​be maintained as our transportation projects move forward. As part of the EA update, Ontario is proposing changes to the EA process that would get shovels in the ground faster. The proposed regulation, if approved, would create a new streamlined process for assessing and consulting on potential environmental impacts resulting in shorter timelines that will allow construction to start earlier without compromising any of the environmental mitigation work. We must help alleviate congestion before it gets worse for commuters and the environment."

The Bradford Women's+ Group hosted the online discussion as part of its mandate as a member of the Just Recovery Simcoe coalition, which supports solutions that are "fair, sustainable and resilient," and recognizes the importance of both ecosystems, and community engagement.