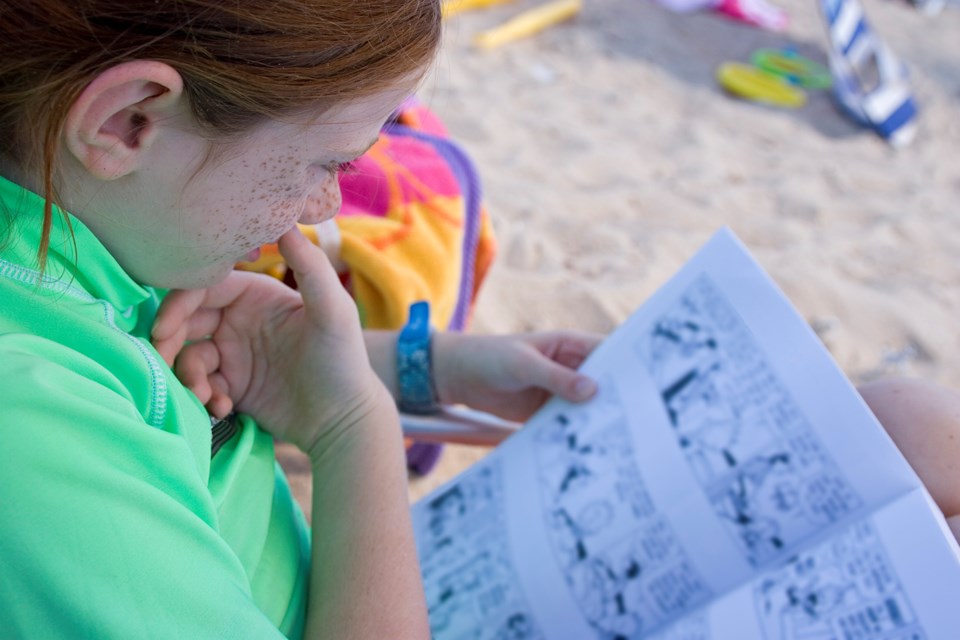 Graphic novels are a great way to help struggling readers improve their vocabulary, build reading confidence and develop a deeper appreciation for storytelling and reading.  The BWG Library’s graphic novels collection includes nonfiction works that can help reluctant readers learn about history and biographies.  They can introduce young readers to the works of Margaret Atwood and Agatha Christie.  And beyond that, they’re just plain fun.

If you are new to graphic novels, check out the BWG Library’s Graphic Novels collections.  Explore the titles listed below, or message the BWG Library for help searching the collection.  You can reach out through Facebook or email bwgmailbox@bradford.library.on.ca.  Here are some of Sarah’s favourites:

Harley Quinn and the birds of prey : the hunt for Harley by Jimmy Palmiotti (Author), Amanda Conner (Illustrator)

Harley Quinn has been transformed, and she wants the world to know! She's ready to shake things up once more - and this time, the gloves are off! Harley Quinn has avoided Gotham City ever since she broke up with The Joker - she found a home, and a kind of family, in Coney Island. But when she gets an offer she can't refuse, she has no choice but to slip back into the city as quietly and quickly as she can, before anyone - especially her ex - learns she's been there.  Girlsplaining : a (sorta) memoir by cartoonist Katja Klengel

Cartoonist Katja Klengel tackles the subjects that have shaped her life: from body shaming to the exploration of female sexuality, from the representation of women in the media, and the social pressure on women who have not yet started a family all with a sense of humor, an open heart, and an unsparing candor

The horrific secret of Kulan Gath's power is revealed! Steel yourself, True Believers - this one is a bummer for the ages. Can Doctor Strange and Elektra deal with this unbelievable horror? Speaking of horror, something is killing the Shuma-Goraths! That would usually be great news, but Kulan Gath thinks he's finally figured out how to consume the Elder God - and that's very bad news for our plane of existence! Strange and Elektra have a plan, though... and the Savage Avengers will assemble!

Quincredible. Quest to be the best! by Rodney Barnes (Author), Selina Espiritu (Artist)

Comics Beat Invulnerability is a pretty useless superpower if you've only got a one-hundred-pound frame to back it up. That's what Quinton West's life became when he went from "small guy who got beat up" to "small guy who can't get hurt" after the meteor shower dubbed "The Event" gifted him the power of invulnerability, but no other powers to compliment it. But there's more to Quin than meets the eye, and after some encouragement from his new mentor--a local New Orleans-based superhero named Glow--Quin realizes that he can use his quirky hobby of creating Rube Goldberg devices to outsmart the opposition. But being a hero paints a target on your back, and Quin's got to risk it all to join the ranks of the superheroes he looks up to. It's a good thing he can take a punch.

An office of dead government agents. A gifted new killer. Two ex-Captain Americas...When a dramatic attempt on the life of Bucky Barnes reunites him with Sam Wilson, the two old friends are plunged headlong into a race to uncover the new leader of Hydra before a mass casualty event announces the terror group's resurgence to the world. The clock is ticking...

Paul at Home by Michel Rabagliati

An affecting exploration of the ways our roles as parents and children change over a lifetime Paul at Home is Quebecois superstar Michel Rabagliati's most personal book yet, a riveting, emotional, and frequently amusing take on the losses and loneliness of being closer to retirement than to university. Paul is in his mid-50s, a successful cartoonist with an achy shoulder living in a house he once shared with his wife and daughter. The backyard is unkempt, full of weeds. A swing set sits idle, slowly rusting beside a half-dead tree Paul planted with his then-five-year-old daughter. The room that belonged to his now-18-year-old daughter is mostly unused, especially once she decides to move overseas. Left unspoken but lingering in the background is Paul's divorce after a three decade relationship with his high school sweetheart. Amid all of this emotional turmoil, Paul visits his ailing mother in the final months of her life.  Paul at Home is a playful and poetic rumination on loss and the sometimes unsettling changes that come with middle age.