History of West Gwillimbury finds a home at The Elden 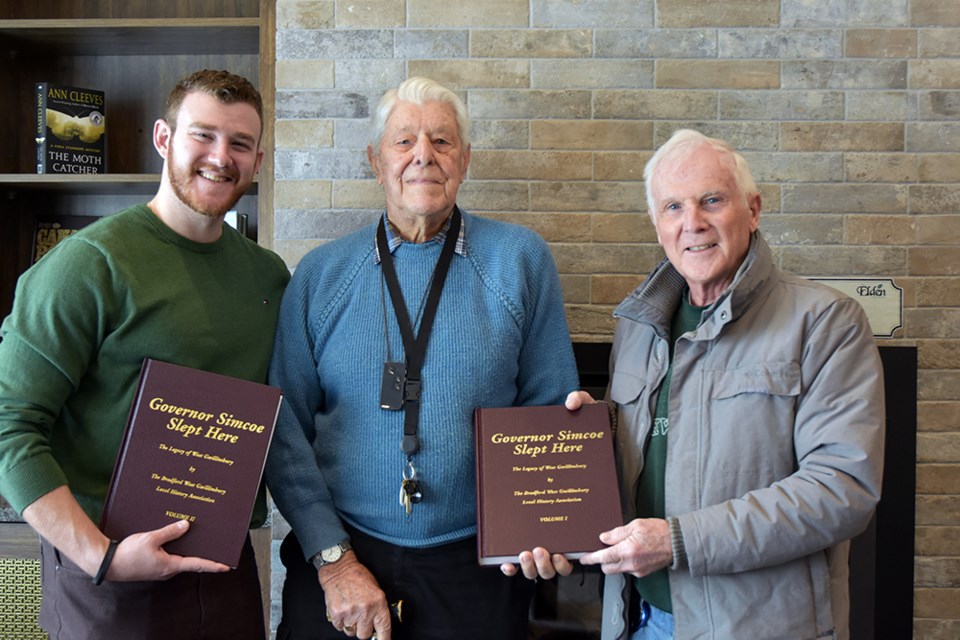 Bob Sturgeon was one of the volunteers who worked on the so-called WEGWHIST project under the late George Jackson – the project that produced the book Governor Simcoe Slept Here: The Legacy of West Gwillimbury.

So, when Sturgeon moved into The Elden of Bradford Retirement Residence earlier this month, he wondered if the Bradford West Gwillimbury Local History Association would be willing to donate a set of the books for The Elden’s new library.

The association was delighted to comply, and on Jan. 28, one of its members, Bill Marks, delivered the two-volume set to the retirement residence.

Marks also shared details of the monumental effort that led to the production of Governor Simcoe Slept Here.

“We gathered a bunch of people together – long-time residents, and some younger people – to work on sections,” said Marks. That was back in 2001. “Everybody had a chapter. Nobody had experience in writing.”

Marks worked on the military history of West Gwillimbury; Sturgeon on the section about surveying, and the laying out of the township’s roads and concession lines. Others researched schools, local families, businesses – every aspect of life in the township, from 1819 to 1960 – unearthing photographs and records lovingly preserved by local residents.

Initially, WEGWHIST hoped to produce a single volume within a year or two.

“It went on and on and on,” said Marks. “Two years became four years, became five years.” And with more than 3,000 photos and pages of research, one volume became two.

“Nobody quit out of the group,” despite the growing scope of the project, Marks said. “It’s quite an accomplishment. We couldn’t believe what we had accomplished when the volumes arrived.”

It was considered a gamble at the time, when Jackson and the team signed a contract with publisher Friesens Corporation to print 1,000 copies, backed by donations, an Ontario Trillium Foundation grant, and funding from the Town of BWG.

It turned out to be no gamble at all.

“We had 600 pre-sold before we even finished,” said Marks. Sales were so strong that “by Christmas, there were only a few left” – and the team ordered a second printing of 1,000.

There are now only 38 copies left of that second printing. The association plans to hold back 10 copies for presentation purposes, to be given to new schools in the area and “presentations like this,” Marks said.

The remaining copies can be purchased by contacting the association or the BWG Public Library.

Accepting the donation were The Elden's Manager of Marketing Jaime Robertson and Activities Director Chad Axelrod.

“It’s another piece of Bradford,” helping to link residents to the town, said Robertson, as she thanked Marks, Sturgeon and the history association for the gift.

Sturgeon, an author in his own right, also donated copies of his three published volumes to The Elden’s library. He will be launching a fourth volume of his memoirs, The Days of Summer, this year, with a book launch and signing at The Elden.

Bradford residents tour new 'unretirement residence' (4 photos)
Aug 1, 2018 5:00 PM
Comments
We welcome your feedback and encourage you to share your thoughts. We ask that you be respectful of others and their points of view, refrain from personal attacks and stay on topic. To learn about our commenting policies and how we moderate, please read our Community Guidelines.