A team from the University of Waterloo, cut from a $10-million prize, is continuing its research in the Holland Marsh in Bradford West Gwillimbury
Feb 12, 2019 1:45 PM By: Miriam King 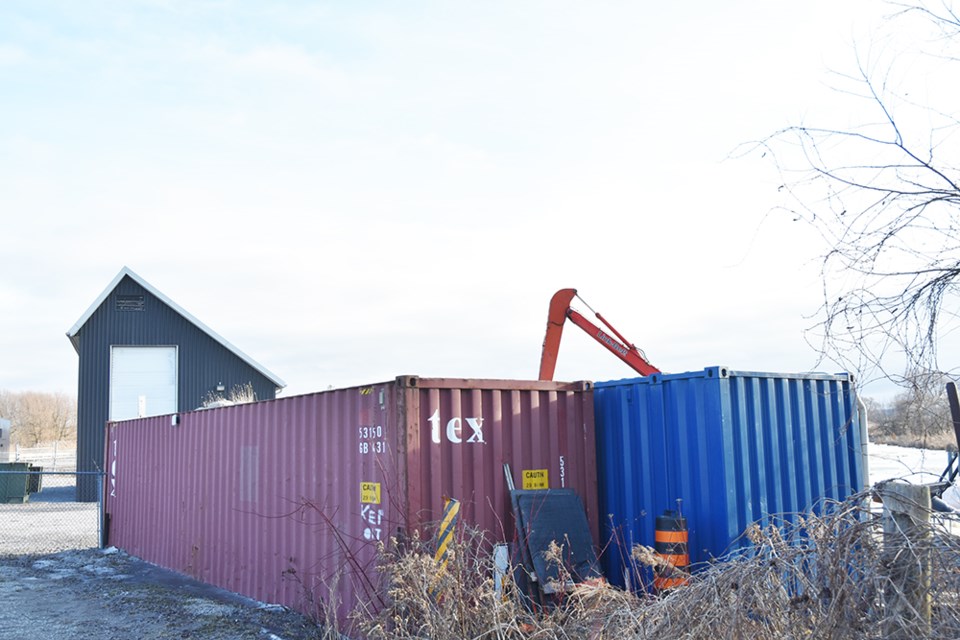 A view of the Art Janse pumping station in the Holland Marsh, and the storage containers still on the site. Miriam King/Bradford Today

A team from the University of Waterlook was already working on pilot projects, mostly in northern Ontario, relating to “the management of mine waste and the attenuation of agricultural waste,” even before it was invited to enter the George Barley Water Prize competition.

That competition, funded by the Everglades Foundation of Florida, is offering a top prize of $10 million for the best solution to the global phosphorus problem. Last year, teams did research in the Holland Marsh in Bradford West Gwillimbury, including the University of Waterloo’s Groundwater Geochemistry and Remediation Group.

The team used Phosphex, a Basic Oxygen Furnace Slag (BOFS) that is a by-product of steel production. Developed in the mid-1990s, Phosphex is rich in calcium oxide and calcium hydroxide, both of which permanently bind with phosphorus.

“The advantage to it is that there’s very little capital cost,” said Project Manager Steve Holland. “You’re repurposing that waste material. You’re using that reactivity for a beneficial purpose.”

And because the reactions all take place on the surface of the Phosphex, it’s possible to reuse the BOFS, simply by breaking it up.

“The finer you crush the material, the more surfaces you are creating,” until at some point, the phosphorus-rich material is fine enough to be taken away and used as an “agricultural soil amendment," Holland said.

The process makes water more alkaline in nature, he said, but a solenoid-powered system has been developed to add carbon dioxide and return the water to its natural pH level.

Phosphorus is a nutrient that can spur both weed growth and algal blooms in bodies of water.

The team's proposal earned it a place in the semi-finals, which took place at the Art Janse Pumping Station in the Holland Marsh last February to May. There were nine teams in all that were given space in two shipping containers to demonstrate their proposals.

The space proved to be a limitation for the Waterloo team.

“It’s very different, operating under a competition scenario,” said Holland. “We’re very used to being very adaptive under field conditions, to modify things on the fly.”

Instead, the team - comprised of university staff and faculty members, two PhD candidates and five or six undergraduates - had to work within the nine square metre space provided, which wasn’t enough for the full gravity-flow system. Instead, the Waterloo team had to use pumps to get the fall of water needed.

“It’s not exactly how the system was designed,” Holland said, but even with the limitations, “our treatment was within the top four of the teams that competed, and we’re very proud of that.”

The proposal didn’t make it to the Barley Prize finals, but the group plans to continue its field trials at the Janse Pumping Station this year.

It has the support of the Town of BWG, and permission to use the two shipping containers – which should allow them to run the system by gravity, and dispense with the pump, making it more energy efficient.

“It’s a very interesting field site,” said Holland. “It’s right in our backyard, and agriculture is so important.”

And so is the capture of phosphorus.

“We know this is an important issue in Lake Simcoe and other areas,” Holland said. “We’re keen to keep that system and that technology going. It certainly has been an interesting opportunity.”

When contacted, Lake Simcoe Region Conservation Authority (LSRCA) CAO Mike Walters indicated that although the organization wasn't involved in any aspect of the competition, it is interested in the results.

"LSRCA is supportive of any work to find viable solutions," Walters said. "In particular, a large-scale technology that's able to remove phosphorus from water and reuse it would be a significant step towards addressing the issue here in our watershed."

Walters congratulated the two Canadian entries - the Waterloo team, and a team from Toronto-based Econse Water Purification System - for making it to the pilot project stage. "That's a significant achievement," he said.

As for the ongoing research and the George Barley water prize, Walters noted, "of course I'm hopeful that an affordable and sustained solution for Lake Simcoe and the watershed will result from the efforts of these groups. Phosphorus has been a long-standing issue in Lake Simcoe and we have yet to find a long-term solution."

"Development needs to incorporate low impact development techniques to manage stormwater. Where possible, we need to protect the natural features on our land and we need to ensure that people understand their personal impact on the health of the lake and the surrounding land."

$10M prize finalists selected after Holland Marsh research
Oct 26, 2018 12:00 PM
Comments
We welcome your feedback and encourage you to share your thoughts. We ask that you be respectful of others and their points of view, refrain from personal attacks and stay on topic. To learn about our commenting policies and how we moderate, please read our Community Guidelines.