Ignite the Ice ringette tourney biggest one yet to hit Newmarket 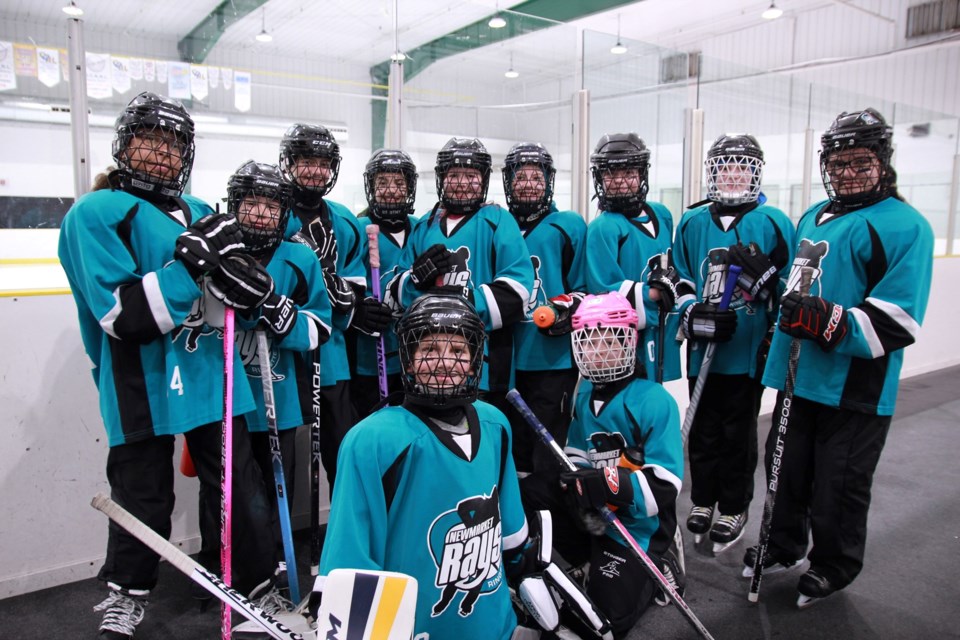 The Newmarket Rays U12 girls are shown here at the 2019 Ignite the Ice tourney at Magna Centre. Supplied photo/Alyssia Byers

Sweet! The Newmarket Rays will kick off the 13 annual Ignite the Ice Ringette weekend tournament on Valentine’s Day, Feb. 14 as the U14R girls take on the Sunderland Stringerz at 10:30 a.m. at the Magna Centre.

Over three days, including Feb. 15 and 16, Newmarket will host its biggest tourney yet, welcoming 862 players and 60 teams to town for a chance to play the fastest game for girls on ice.

The winners of each age division will take home gold medals in that division and will compete for the chance to be crowned champions of the Ignite the Ice Tournament in their respective age group.

This year will see many local teams hit the ice, including from Markham, Richmond Hill, Barrie, Oshawa, and Sunderland, along with teams from as far away as Sault Ste. Marie, Gloucester, Cumberland, Sudbury, Timmins, Goderich, Ottawa, London, St. Marys, Hamilton, and Toronto.

According to Ringette Canada, like hockey, ringette is played on ice with skates and sticks with six players per team on the ice at once. The objective is to score goals by shooting the object of play into the opposing team’s net at either end of the rink during stop-time periods of play.

But this is where the comparisons between ringette and hockey end, the association states. The stick is straight and the players pursue a rubber ring, not a puck, and there is no intentional body contact.

Alyssia Byers, whose two daughters have played ringette with the Newmarket Rays for nine and seven years respectively, said ringette also is well known for the camaraderie and friendships that develop.

“Because most players return year after year, the bonds they develop turn into lifetime friendships,” Byers said. “They always say fun and friendship happen on and off the ice and that is certainly true with ringette, and it’s a huge part of my own daughters’ lives.”

With hockey, it can be very difficult for players to learn how to stick handle, and skate at the same time. But with ringette, once your stick is in the ring, you can keep your head up and skate fast, which results in an incredibly fast game, Byers added.

“Ringette is a great team sport to watch, as it promotes teamwork,” she said. “You must pass it over each blue line, so no one player can hog the ring from one end to the other. You must work as a team to succeed. There is a lot of strategy involved, and it's amazing to see some of the plays that teams use to beat the 30 second shot-clock, which is similar to basketball. It truly is amazing to watch.”

The Newmarket and District Ringette Association is a volunteer run, not-for-profit group co-founded in 1995 by Charles Middleton and Sheri Lee. The association serves players aged four to 70 in Newmarket, Aurora, East Gwillimbury and Bradford West-Gwillimbury.

Everyone is welcome to stop by the Magna Centre for some fun games, raffles, vendors and to cheer on the teams from Feb. 14 to Feb.16, 2020.

The Magna Centre is at 800 Mulock Dr.

For more information on the Newmarket Rays and Ignite the Ice Ringette Tournament, visit here.

For those who may be interested in trying ringette, the Newmarket Ringette Association is hosting a free event, Come try Ringette, on Saturday, March 28 at 10:45 a.m. at the Magna Centre ice.

All that is needed are skates and a certified helmet. You are invited to arrive early to watch the Learn to Play program, or stay afterwards catch the U16 players in action.

There is also an equipment lending program available to first-time players.

OPP teams with OFSC in snowmobiling safety initiative
Feb 26, 2020 12:00 PM
Comments
We welcome your feedback and encourage you to share your thoughts on this story. We ask that you be respectful of others and their points of view, refrain from personal attacks and stay on topic. To learn about our commenting policies and how we moderate, please read our Community Guidelines.

About the Author: Kim Champion

Kim Champion is a veteran journalist and editor who covers Newmarket and issues that impact York Region.
Read more