'We are satisfied that there is no basis for finding the Deputy Mayor in breach of the Municipal Conflict of Interest Act or the Code'
Sep 16, 2020 11:00 AM By: Miriam King 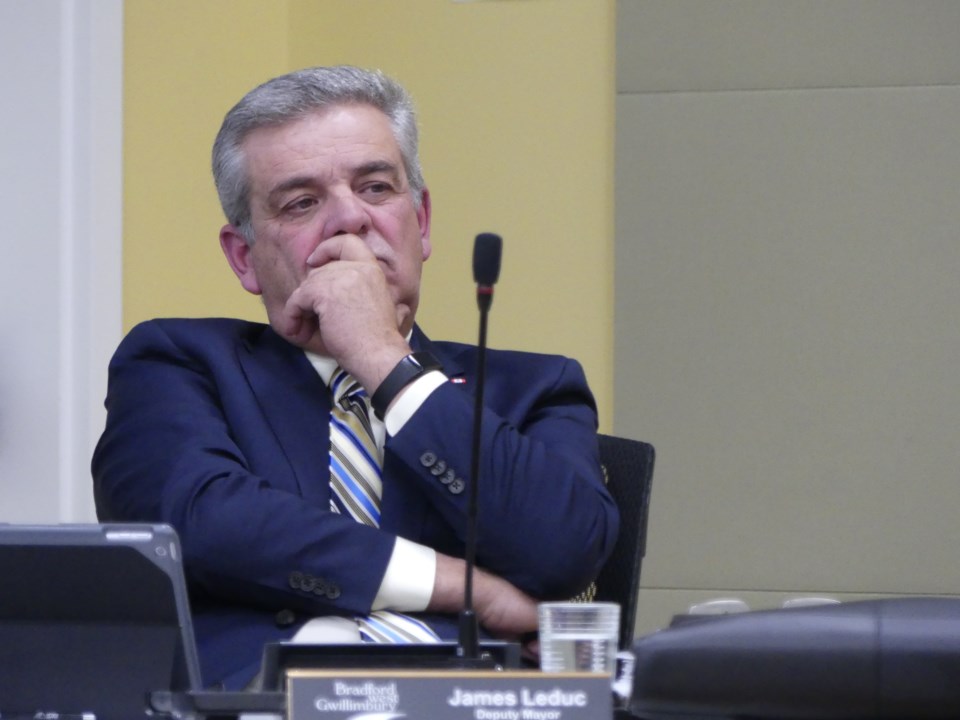 When Deputy Mayor James Leduc argued in favour of discounting the water bill received by McDonald’s Restaurant in Bradford, back on June 16, he opened a can of worms.

For a reason that remains unknown, the restaurant’s water bill jumped nearly tenfold, from $2,000 in August of 2019 to $10,000 in October, $18,000 in December and finally, $20,000 in February 2020. The local franchisee was not alerted and remained unaware of the huge increase because the bills were sent directly to head office.

When the franchisee became aware of the hike, in March, McDonald’s petitioned the town for relief. No cause for the sudden spike was ever discovered, and water use returned to normal in April.

Town staff proposed a discount of 33 percent, but Deputy Mayor Leduc argued for a reduction of 50 percent, citing the restaurant’s support for the community, and the impact of the pandemic.

“To me, McDonald’s is a good corporate business in our community. The owner certainly stepped up for the (Bradford) Lions during COVID and has been out in our community as much as possible,” he was quoted at the time.

His comment raised red flags for one resident. Noting that Deputy Mayor James Leduc was a former member of the Bradford Lions Club, Nicholas Ferreira contacted the Town of Bradford West Gwillimbury’s Integrity Commissioner, raising the possibility of a conflict of interest.

“This whole situation doesn’t sit right with me,” Ferreira wrote in a letter to Bradford Today. “As a long-time resident of Bradford, it rubbed me the wrong way to learn that the deputy mayor had given the local McDonald’s – one of the world’s largest corporations – a 50 percent reduction on their water bill. Especially in a middle of a global pandemic when so many residents are struggling to make ends meet.”

At the time he filed the complaint, Ferreira believed Leduc was a “prominent member of the Bradford Lions Club.” He noted that BWG’s Code of Conduct “requires members to avoid any appearance of favouring organizations or groups.”

The Integrity Commissioner did investigate, and determined that Leduc had actually resigned from the Lions on Aug. 14, 2019, after changes to the Municipal Conflict of Interest Act (MCIA) required municipal politicians to step away from non-profit organizations - “in recognition that his continued membership might cause him to be in conflict of interest, should a matter benefiting the Lions Club come before Council for consideration and he fail to recuse himself.”

The Commissioner concluded, “Because he was no longer a member of the Bradford Lions Club, and had not been for the previous year, we are satisfied that there is no basis for finding the Deputy Mayor in breach of the MCIA or the Code.”

Even had the Deputy Mayor still been a member of the club, there might have been no conflict of influence, the investigation noted. For there to be a conflict, there would have to be a “pecuniary interest,” either direct or indirect – and there was nothing to show that the reduction of the water bill for McDonald’s would in any way benefit the Lions.

The Commissioner suggested that it would be reasonable to interpret Leduc’s comments “merely as reflecting upon the ‘good corporate citizenship’ of McDonald’s as warranting recognition in relieving them from excessive and unexpected bills arising without warning during the pandemic.”

The 50 percent reduction was supported by other councillors, largely because the town failed to raise the alarm. “Someone in our staff should have sat up and said, Hey!” said Coun. Raj Sandhu at the June meeting of Council.

“They are good corporate citizens, and there should have been a flag,” agreed Coun. Gary Lamb.

“The message here is we need to find a way to flag these (anomalies). We don’t want to see businesses impacted like that,” said Leduc at the time.

Contacted this week, he expanded on what had been his intention. "The comment was just because I knew of what the Lions were doing in our community with the support of several businsses stepping up to help," Leduc said, referring to a Lions Club initiative that brought coffee and treats to harried front-line workers at the local long-term care home, and Southlake hospital.

"McDonald's was just mentioned because we were dealing with an issue involving McDonald's at the time. The reduction in the water bill was truly because of the corporate citizen McDonald's has been, not only in our community but others also. They are a great employer when it comes to young people starting to work for the first time," he added.

As for the franchise's support for Ronald McDonald House in Toronto, which provides shelter for families of seriously ill children seeking treatment at city hospitals, "I see it every day at work," he said.

-with files from Natasha Philpott

It's Legion Week in Ontario
Sep 24, 2020 5:00 PM
Comments
We welcome your feedback and encourage you to share your thoughts. We ask that you be respectful of others and their points of view, refrain from personal attacks and stay on topic. To learn about our commenting policies and how we moderate, please read our Community Guidelines.