It's between seasons, but move from dormancy to activity is afoot

While the calendar may say that Spring starts in late March, Nature says differently, explains outdoors columnist ... with a nod to Greek mythology
Mar 2, 2021 4:30 PM By: David Hawke 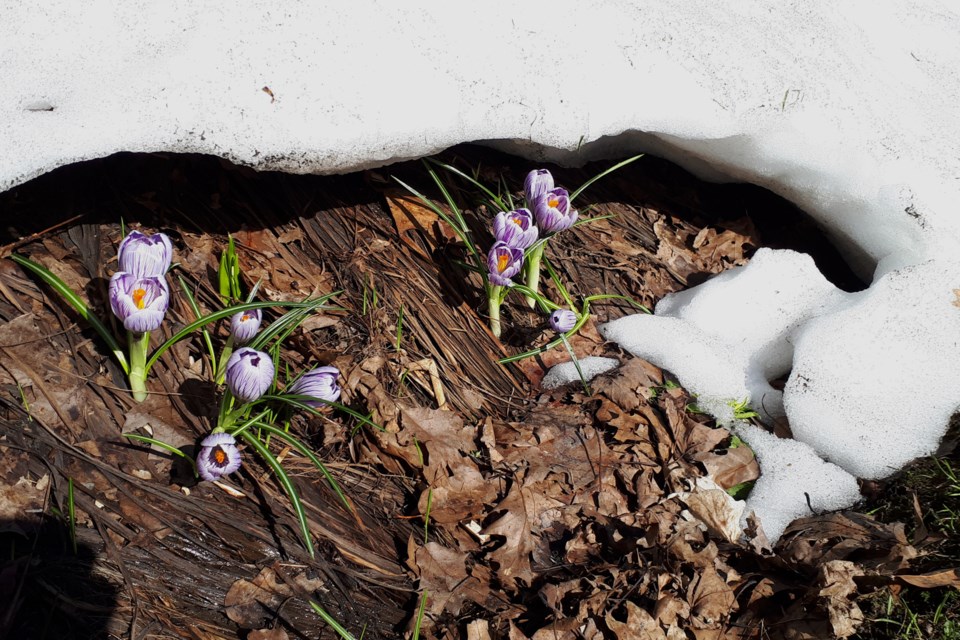 Crocuses in late spring .. a sign of the inevitable changing of the seasons. Who needs a calendar?David Hawke/OrilliaMatters

As the icy breeze slipped around my coat collar, I wished that a scarf had been included in my winter wraps. But the full sun on my face felt so good that I just kept snowshoeing along, hoping to find shelter from the cold zephyr at the edge of the field; the thick cedars would offer a buffer from these late winter winds.

Running along the border of the woodlot were found a set of neatly paced footprints. It appears that a red fox had been on patrol for a mouse or two, probably hunting by way of the bright moonlight that had appeared the past few nights.

The light crust was barely dented by the small animal, yet just enough of a pattern had been left behind to confirm its identity.

For me, wandering fox tracks are one of the first signs of spring, or at least a signal that winter’s coming to an end. That’s the trouble with having only four seasons defined, there is so much that happens ‘between’ seasons.

Right now foxes and owls are seriously into mating and territory establishment, as the arrival of their young will coincide with the soon-to-be-melted fields and the revealing of mice and voles everywhere.

While the calendar may say that Spring starts in late March, Nature says differently.

Initiated by the lengthening hours of daylight, many species are kicking into gear for the coming shift from dormancy to activity: mates to impress, homes to build or find, food to be found… the list goes on.

With each daily rotation of our planet we are shifting our orbit, ever so slightly but steadfastly, around that nearby star called Sun. With enough rotations and a different place on the orbital loop the solar rays hit our side of the planet with just enough force to stimulate plant growth and a warming trend to the air.

Or so the science books say.

One of my favourite ways to interpret Spring is look at Greek mythology as these teachings have, for centuries, nicely explained the unexplainable… like why the seasons occur.

It all started out because of a powerful yet dysfunctional family, a family so great that even having a last name was beneath them. So we will start with the siblings called Zeus, Hades and their sister Demeter.

Demeter had a daughter called Persephone (who could make flowers bloom and green grass grow), and Zeus had a daughter Aphrodite (who managed to invoke a doe-eyed lovey-dovey attitude from all who met her), but Hades was single and was quite lonely ruling the Underworld with no one by his side.

One day Hades confided in sister Demeter that he rather fancied his niece Aphrodite, but Zeus was of the mindset that “no way, no how, bro” when it came to talking to interfamily marital affairs (which is rather hypocritical as Persephone’s father was indeed her Uncle Zeus).

Anyway, Demeter felt that if Aphrodite herself chose to go with Hades, her father would just have to live with that decision. The trick was to get her to fall in love with Uncle Hades. So a plan was hatched, one involving a neighbourhood match-maker by the name of Cupid.

If Hades could inject a love potion into Aphrodite, she would fall in love with the first man she saw. So Hades hid by the trailside, with Cupid’s dart in hand, waiting for Aphrodite to come wandering by. And sure enough, through the dawn’s misty light came the fair maiden. Dart was employed, target hit, love potion kicked in, and… oh crap, it was Persephone who had come wandering the trail!

Hades scooped up the lovelorn lady and scurried off with her to his Underworld before sister Demeter could get wind of his messed up plans. But of course Demeter did find out and she was a tad angry about the situation. Rather than confronting Hades, she went to big brother/husband Zeus and demanded that he intervene and get Persephone back home.

So a parley was arranged to see about getting Persephone straightened out and moving her back home. But Hades wasn’t too keen at just letting her go. So big brother Zeus had to threaten some serious threats upon his little brother if there was non-compliance to the request.

Meanwhile the Overworld was cold and dying, as Persephone was gone and the plants had no reason to bloom.

Due to some fine wordsmithing, Hades set up the terms of Persephone’s release… since her arrival she had eaten 12 pomegranate seeds (eating food in the Underworld was a rite of acceptance) she would have to remain in the dark world for six months, but could return home of the other six months. Handshakes all around.

So now we await the return of Persephone, the young goddess who brings warmth, light and new growth to this Overworld. Hopefully there is no travel ban between these planes, as I for one would hate to see a further delay in her arrival.