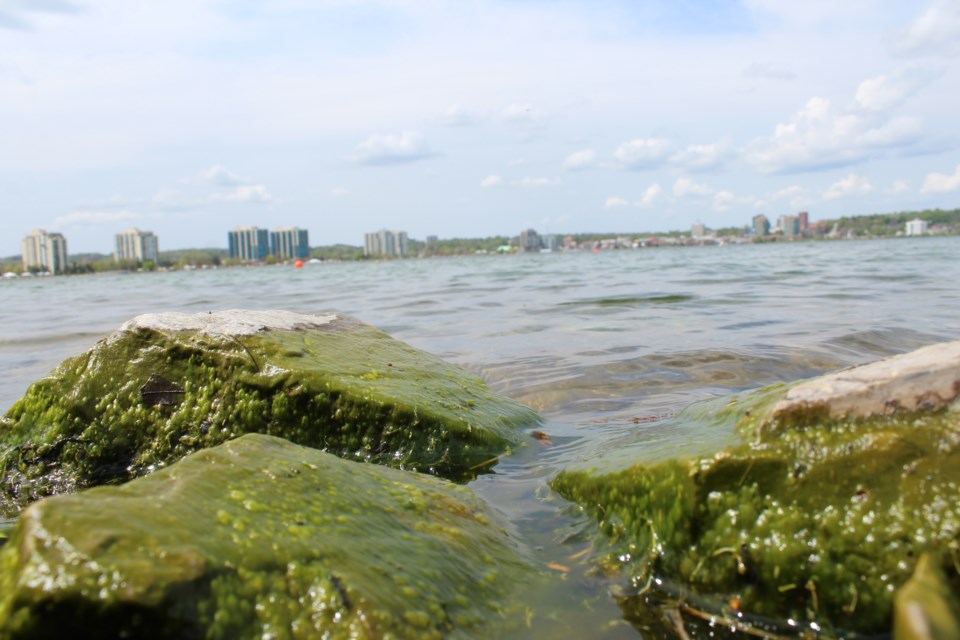 Kempenfelt Bay in Lake Simcoe is shown from the south shore in Barrie. Raymond Bowe/BarrieToday

All lakes have their mysteries and Lake Simcoe’s is a doozie.

The lake’s health is now improving even while harmful phosphorus loading is increasing, according to officials at the Lake Simcoe Region Conservation Authority (LSRCA).

“It is unusual in that it’s defying these lake ecology laws or rules that we’ve had set down for hundreds of years now,” Brian Ginn, the LSRCA’s limnologist or lake doctor, told BarrieToday. “The basic law is that if you increase the amount of phosphorus going into the lake, you are going to increase the amount that’s in the lake water and you’re going to have changes from it — more algae, more plants. And when these things die and decompose, the oxygen is going to decrease.

“It’s this lack of oxygen that was the problem in Lake Simcoe, that caused the problems for the cold-water fish communities in the 1960s to the 1980s and into the 1990s," Ginn added.

Phosphorus loads are calculated on a hydrological year — from June until May of the following year — and the conservation authority’s most recent data shows 131 tonnes of phosphorus entering the lake in 2017-18, which should have resulted in 13 to 18 micrograms per litre, which is too high.

“So it’s below the Lake Simcoe Protection Plan goal, but it’s very close to it, which is a good-news story,” Ginn said. “We’re trying to figure it out.”

The LSRCA has phosphorus-load data combined from Lake Simcoe, Kempenfelt Bay and Cook’s Bay dating back to 2000. The loads fluctuate up and down — 87 tonnes in 2015-16, 73 tonnes from 2016-17, for example — mostly driven by rainfall, which feeds the river tributaries flowing into the lakes and bays, Ginn said.

There are many sources of lake phosphorus, including runoff from urban areas, from farms, wetland and other natural areas, sewage treatment plants, septic systems along the lake, Ginn says, even phosphorus attached to dust particles that blows up, into the atmosphere then falls back into Lake Simcoe.

The LSRCA is looking at two or three reasons why phosphorus loads aren’t having a heater impact on the lake, starting with rainfall.

“It’s not the amount of precipitation we’re getting; it’s when and how it falls,” Ginn said. “In June, we’re getting a lot more of these sudden, intense storms, these storms that will dump 60 millimetres of rain on an area, like overnight, and we’ve never really had those before.

“They’re becoming increasingly more frequent and when they fall so fast and so hard, and there’s so much more water, there’s really no place for that water to go, except as runoff into the rivers and the tributaries,” he said. “That seems to increase the (phosphorus) load. During wintertime as well, when we’re getting a lot more rain events in February and January. And when this rain falls, instead of snow on frozen ground, it’s the same as rain falling on an asphalt parking lot.

“So if you think of the watershed as one big, 3,300-square-kilometre paved parking lot, the water just runs right off the frozen ground directly into these tributaries.”

In 2017-18, approximately 40 per cent of that 131-tonne phosphorus load came from just June and February, pointing to climate change as a factor.

“So that’s one thing we are looking at — when the phosphorus is delivered so fast, is the lake responding?” Ginn said. “You’re getting so much water being pushed in the lake, does that mean it doesn’t have enough time to be processed inside the lake, so it’s not going into the algae and the plants, just kind of flushing out right through the lake?”

Also on the conservation authority's radar are invasive species.

Quagga mussels have all but replaced zebra mussels since about 2010-11. Ginn says they are basically gone from Lake Simcoe, with only a few left in Cook’s Bay.

“The problem with the second species is they are pretty much version 2.0 of zebra mussels,” Ginn said. “Zebra mussels were limited in the fact they couldn’t exist on like a muddy bottom, because they’d be smothered. And they also really didn’t like cold water, so they had to wait for the water to warm up to between 12 and 20 degrees before they started feeding and reproducing more zebra mussels.

“But quagga mussels are active in about four degrees, so they love cold water. It doesn’t bother them and they can also survive in mud. And zebra mussels were eliminated in Lake Simcoe in depths shallower than 20 metres, but quagga mussels go straight to the bottom,” Ginn said.

“With these (quagga) mussels, they eat particles that are floating around the water and phosphorus is attached to these particles, so we think they’re taking some of this phosphorus…and the rest of the phosphorus is dissolved in the lake water.”

The other invasive species is starry stonewort, a plant-like algae, that absorbs its nutrients from the surrounding water.

“It’s increased so much, now two-thirds of all the aquatic plants in Lake Simcoe is this invasive starry stonewort,” Ginn said. “We think whatever the mussels aren’t eating, in these phosphorus particles, is dissolved and this dissolved phosphorus is also being taken up by this invasive plant that we have.

“What we’re  going to investigate… is climate playing a role, how the phosphorus is being flushed through, and also is all this phosphorus going into these two invasive species?” Ginn said.

Ontario’s Ministry of Environment and Climate Change gave the LSRCA funding to present these possible scenarios to the ministry and start researching them during the next two to three years, to determine why Lake Simcoe is defying the rules of lake health.

“We have a number of thoughts of why that’s the case,” LSRCA chief administrative officer Mike Walters told Barrie city council on Sept. 21. “But people can be at least satisfied with the fact that Lake Simcoe is almost at the oxygen target, which is one of the key performance indicators that we use.

“That means that the cold-water fish species that are in the lake can thrive, and that was one of the major performance indicators…for fish species," he added. "So overall, things are looking very good. Why they’re looking good, we’re going to be answering those questions.”

Phosphorus is a naturally occurring element essential for all life, found in plants, animals, humans and even DNA, the building blocks of all life.

In water bodies such as lakes, a certain amount is necessary, but over time too much phosphorus can cause serious issues, including excessive weeds, toxic algae and depleted oxygen levels in our rivers, streams and, ultimately, Lake Simcoe.

Because it's a naturally occurring element, one source of phosphorus entering the lake is from the weathering of rocks and minerals. And because all life consumes phosphorus, a certain amount is excreted in our waste or released from tissues during plant decomposition.

Phosphorus is also a very useful and can be found in many of the common, every day products we use, such as cola, fertilizers, toothpaste, shampoo, matches and flares. It's also used in pesticides, pyrotechnics and in the production of steel.

About the Author: Bob Bruton