'The app is sophisticated enough where it will also tell you if you have one of the variants, and it will tell you which variation of the virus you have,' said co-founder
Mar 5, 2021 7:00 PM By: Tyler Evans 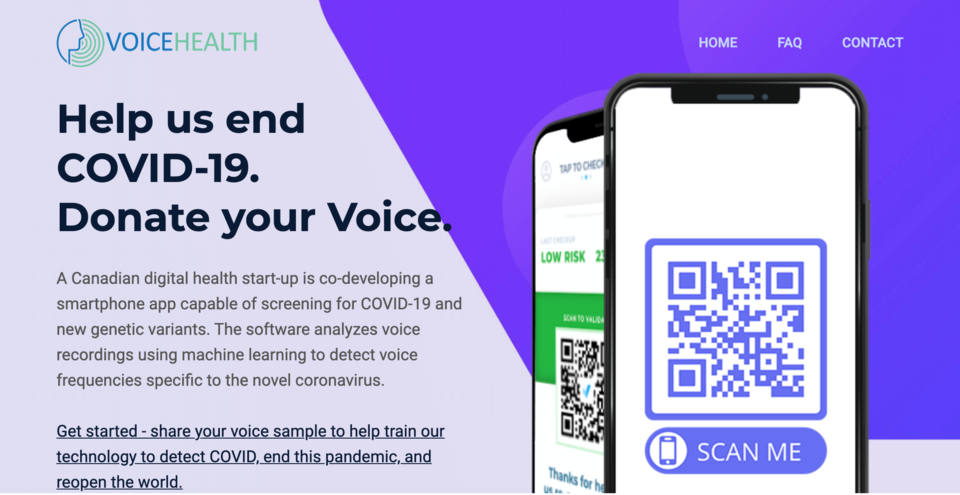 VoiceHealth, the brainchild of Washago's Philip Gutwein and Orillia's Hank Ilesic, is developing an app that could test for COVID-19. Contributed photo.

Two local men are pioneering an innovation they believe will be critical to re-opening the travel, entertainment, sporting, and hospitality industries.

Philip Gutwein, a Washago man and co-founder of VoiceHealth, is working alongside doctors and engineers to create an app that uses voice analysis to not only test people for COVID-19, but to discern other health conditions using Sonaphi technology.

“About a year ago, when COVID started to take our freedoms away, we put resources into this platform in order to develop it to a point where we could use Sonaphi's back-end software on a smartphone,” Gutwein explains.

The app is not yet available to the public as it continues to run through the testing and data collecting stages. As of today, it can test for COVID-19 and give immediate test results with 80 percent accuracy through a 30-second voice recording, Gutwein claims.

“Over the last year, we had people who have tested positive for COVID-19 leave their voice print through an app, and then it goes into the machine learning database,” Gutwein said.

“We have been talking to Health Canada about this app, and it won’t be very long before we have a hospital or university working with this app as opposed to the standard testing that we have now.”

Gutwein says VoiceHealth is working to bring the app’s accuracy level up to over 90 percent.

“The app is sophisticated enough where it will also tell you if you have one of the variants, and it will tell you which variation of the virus you have,” he said.

“This technology can be used for a different medical platform going forward. A person’s health can be determined through this the app. It can tell you if you have strep throat for example, and then the doctor can send a prescription to the pharmacy without you even having to go to the doctor’s office.”

Gutwein says the app will be available soon on the Apple and Google Play store, and it will come at a very low cost.

Canadian Football Hall of Fame punter, and Orillia resident, Hank Ilesic, is a consultant and marketing assistant for the new VoiceHealth innovation.

He called the technolody a 'game-changer.'

"There is actually scientific proof that there is a frequency that is released in your voice to the COVID-19 virus,” Ilesic said.

Ilesic encourages everyone to head over to the VoiceHealth website and leave a recording of their voice which will help the project move along quicker.

“It almost sounds too good to be true," said  Ilesic. "It’s in a study phase right now, so we need people to go online and volunteer their voice."

Ilesic says the VoiceHealth app could be a game changer for the professional and local sporting world.

“You could test as often as you have to in the privacy of your own convenience, if you happen to have the virus it goes into a global data bank that can then detect where the hotbeds are,” he explained.

Ilesic is hopeful the app will have a role and be ready for the FIFA 2022 World Cup of Soccer event.

About the Author: Tyler Evans