'The sustainability of our farmland, significant wetlands, key shorelines and forests are threatened by the urbanization pressures,' official says
Apr 13, 2021 3:30 PM By: BradfordToday Staff 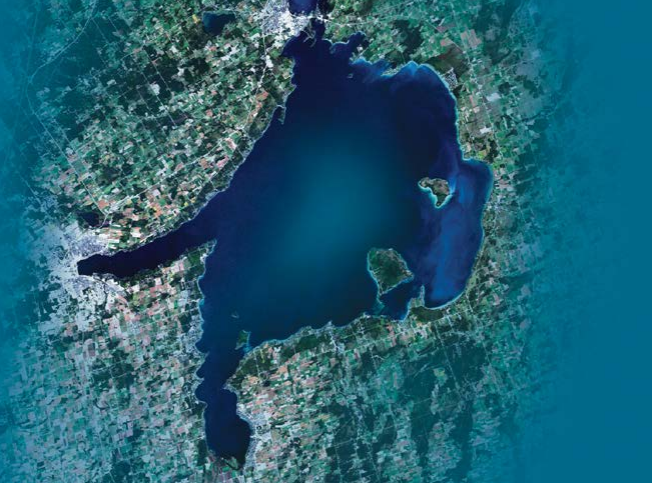 A satellite view of Lake Simcoe. Photo courtesy the Province of Ontario

“In 2018, Simcoe County was proposed by the province as a key area to expand Greenbelt protections to and for good reason,” says Margaret Prophet of the Simcoe County Greenbelt Coalition. “The sustainability of our farmland, significant wetlands, key shorelines and forests are threatened by the urbanization pressures we’re facing that encourage sprawl. We need to ensure the highest level of protection for our landscapes and water before we lose it to overdevelopment.”

A recent report, Lake Simcoe Under Pressure 2021:  Key Stressors and Solutions, authored by the Simcoe County Greenbelt Coalition and Rescue Lake Simcoe Coalition points out that huge projects in the area will only overwhelm Lake Simcoe - a lake already in declining health.

The issues are many, but the groups narrowed it down to the most egregious  projects of concern: The Bradford Bypass, the Orbit MZO, Upper York Sewage “Solution”, and growth planning.

“We cannot afford to ignore the bigger picture,” says Claire Malcolmson of the Rescue Lake Simcoe Coalition. “The science about the lake and climate is telling us that already our land use planning decisions are destroying the places and water we care about.

"Building large scale infrastructure projects through MZOs and 'streamlined' environmental assessments is using the same 1950s solutions that got us here in the first place. Lake Simcoe needs serious champions with a sense of urgency about the lake’s predicament because the impacts of decisions made today will be with us for centuries," said Malcolmson.

The report outlines several recommendations about how to keep the Lake Simcoe Protection Plan strong as well as cancelling the outlined projects as they are currently proposed.

Another one of the recommendations is to grow the Greenbelt to help protect the portion of the Lake Simcoe watershed that isn’t already in Greenbelt to protect its farmland, areas of hydrological importance, and to constrain urban growth in Simcoe County.

Margaret Prophet of Simcoe County Greenbelt Coalition says, “Sprawl and overdevelopment are huge threats to Lake Simcoe and our region generally.  The land speculators will never say they have enough of our farmland, our wetlands and forests to turn a profit.  It is the job of our elected officials and the public to limit what is for sale and destruction. The Greenbelt can help limit  sprawl and strengthen the protection for our most sensitive lands - and most importantly, our water.”

The groups recognize the need to expand the Greenbelt to Simcoe County is urgent because Ontario recently changed many planning policies; municipalities are being directed to calculate the amount of land they will need to accommodate growth to 2051 with market based methodologies that favour sprawl.

Malcolmson says, “It’s expected that the watershed’s population will more than double and likely add 20 tonnes of phosphorus to the lake by 2051. The Lake Simcoe Protection Plan target is to lower phosphorus loads from an average of 90 tonnes to 44 tonnes per year by 2045. We are concerned that the province is approving development without any public discussion or consideration of the long term damage it causes to Lake Simcoe. That should concern everyone.”

The public has until April 19 to contact the province and encourage them to expand the Greenbelt to Simcoe County. The projects outlined in the report will also likely be decided on in the near future as well.

“There isn’t a single solution to fix the problems that recent provincial policy changes have created, but reconsidering these large infrastructure projects, strengthening the Lake Simcoe Protection Plan and expanding the Greenbelt to vulnerable areas are a good start,” says Malcolmson.

The public can review the Lake Simcoe Under Pressure report at: www.rescuelakesimcoe.org.  For those interested in submitting comments to the province about including Simcoe County and protecting Lake Simcoe with Greenbelt expansion, you can visit www.simcoecountygreenbelt.ca for tools and tips.

Ontario’s comment portal on Greenbelt expansion is at https://ero.ontario.ca/notice/019-3136