Local family will be featured on debut episode of Family Feud

'Meeting Gerry Dee and playing Family Feud after a lifetime of watching the American Family Feud was amazing and so surreal,' said long-time local nurse
Dec 13, 2019 4:00 PM By: Dave Dawson 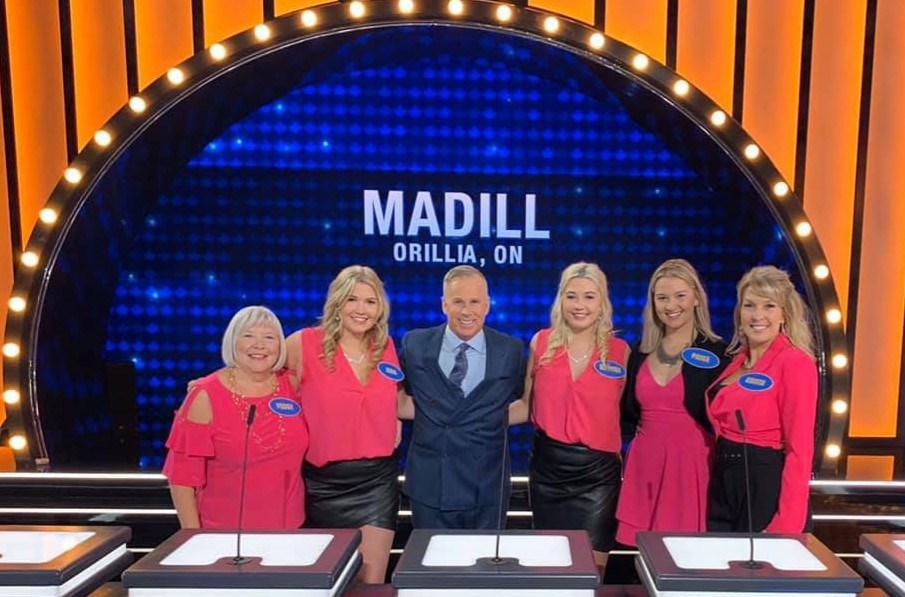 A local family will be on the debut episode of the new Canadian Family Feud. Peggy Madill, far left, is shown with host Gerry Dee and her grand-daughters Paige, Brooke and Jaida Faragher and their mom, Krista Hastings. Contributed photo

Three generations of "sassy women" from Orillia will be featured on the debut episode of Family Feud Canada later this month.

Krista Hastings and her three daughters - Paige, Brooke and Jaida Faragher - along with Krista's "adorable mother", Peggy Madill, will be one of the two families featured when the new CBC Television game show hits the airwaves Dec. 16.

When the local family heard Family Feud was coming to Canada, they decided to submit a video application.

"It featured all five of us, sharing a little bit about each of us, including some fun facts and showing off our personalities," said Hastings, noting the video application, submitted Sept. 3, also depicted them playing a mock Family Feud game.

"On Sept. 19, we received an email from Family Feud Canada saying they loved our video and the producer wanted to talk to me (team captain) on the phone," said Hastings.

On that call, Hastings shared more about her family and answered some test Family Feud questions. Then, the family was invited to the on-site auditions at CBC's studio in Toronto Sept. 22.

"We chose to do a cheer to introduce our fabulous Madill family and then played a mock game of Family Feud with another family," Hastings said of the three-hour process.

Then they waited. They were told they would be contacted in mid-October if they made the cut.

"We received the exciting phone call on Oct. 18 that they loved the three generations of sassy women and wanted us for Family Feud Canada," said Hastings.

While she is unable to divulge how the family fared, she said the experience was "truly amazing."

"Aside from the bonding time I got to spend with my three oldest daughters and my mom, the experience of meeting other families from across the country and meeting Gerry Dee and playing Family Feud after a lifetime of watching the American Family Feud was amazing and so surreal," Hastings said.

"I honestly still look at the pictures and can’t believe it."

She said the staff and crew of the show were welcoming and friendly.

"It made all the nervousness of being taped for national TV go away," said Hastings, who added Dee was a "very easy going, down-to-earth guy and absolutely hilarious. He had us all cracking up, several times - on and off screen."

To put the local family's feat in perspective, thousands of families applied to be on the Canadian version of the long-running game show.

And Hastings and her clan were chosen for the first episode of the new CBC show.

Hastings has been a registered nurse for 22 years and serves as a care co-ordinator with the North Simcoe Muskoka Local Health Integration Network. The mother of five is a hockey mom in the winter and a lacrosse mom in the summer.

The three sisters all work at St. Louis Bar and Grill and each attends Georigan College in either Orillia or Barrie. Brooke and Jaida are identical twins.

Peggy Madill is a happily retired registered nurse. She worked in the obstetrical department of the Orillia Soldiers' Memorial Hospital for 25 years and then worked for Dr. Lowry and Dr. Barnett for 10 years. She has been married to her high school sweetheart for 49 years.

Family Feud will broadcast four nights a week (Monday through Thursday) on CBC and the free CBC Gem streaming service beginning Dec. 16 at 8 p.m., before moving to its regular time slot of 7:30 p.m. on Monday, Dec. 23.

“It has been an incredible experience meeting the families, hearing their stories and of course, actually playing Family Feud Canada,” said Dee. “The level of energy and outpouring of positivity from the contestants has been amazing to witness. I’ve had a number of families tell me they are organizing viewing parties in their communities with their loved ones and hometowns rallying behind them, which is something that I think Canadians do so well.”

St. Louis Bar and Grill in Orillia will be hosting a viewing party on Dec. 16 for anybody who wants to come and cheer on the local family.