Lurking in the meadows, the praying mantis is preying for food

Our outdoors columnist reveals everything you need to know about this unique critter often found flourishing in the fall
0
Sep 22, 2019 7:30 PM By: David Hawke 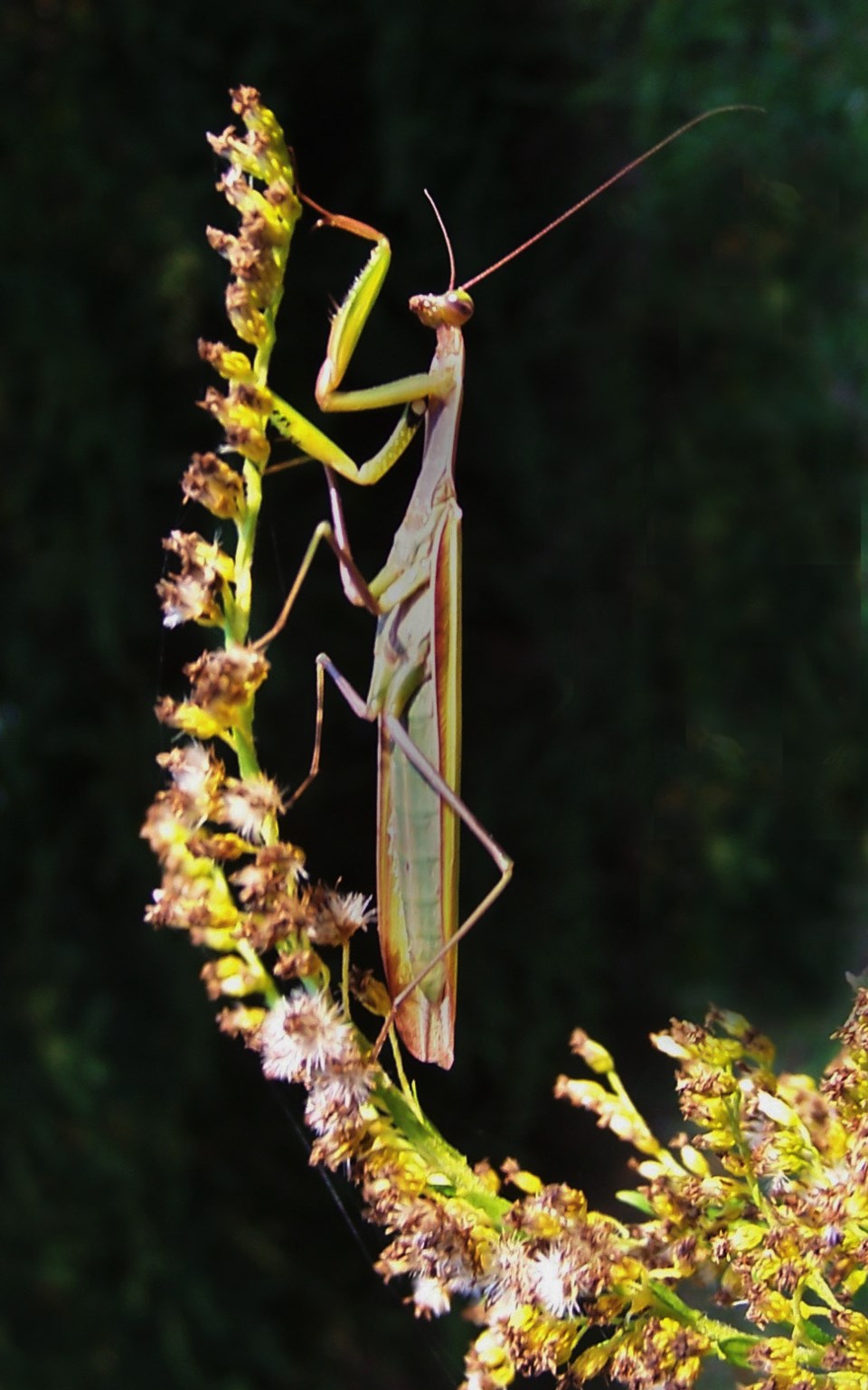 Our outdoors columnist spied this praying mantis recently ... and noticed it's a little different. David Hawke/OrilliaMatters

Just when you think you know everything, along comes something new. Recently that's what happened to me and it involved that unique critter called the praying mantis.

I knew that they laid an egg case in the fall (called an ootheca), that they are predatory, and that the best time of year to find one is in the autumn when they are adult sized and can be flushed into flight as you walk across a field.

But last week a group of us, when we were supposed to be learning tree identification, found a praying mantis that didn't look 'right', in that it had a missing identifying feature, that white spot inside the forelegs.

At first I passed it off as probably perhaps maybe being a male, but no, there was that niggly deep down inside feeling that I was wrong. I don't like being wrong. So I tried to figure out what was the right answer.

Seems that I've stumbled onto a void of information within the ol' internet. Praying mantis? The best that the great artificial intelligence could tell me was that they are green (usually), predatory, and lay an egg case in fall.

That's about it, unless you want to buy them, then there are lots of websites that will trade you money for egg cases. None of that 'information' was of help to me.

So, I decided to try to find my answers the old-fashioned way... I asked my wife. Julie is a trained entomologist, and knows her bugs from her beetles (you can drive a bug, but you dance to the music of a beetle, right?)

She sagely suggested I delve into something called a textbook, a device that contains no batteries yet holds lots of information. Sounded primitive, but I gave it a try.

And wow, it worked. The particular praying mantis that we had found did not have a white and black spot inside its foreleg; every mantis should have that, I thought. But this one didn't. And it was huge in size, compared to the others also found nearby.

According to the books, because it lacked the leg spot, this was a Chinese mantis.

Ah, so there is more than one kind of mantis is lurking in the local meadows!

Our region is home for two species of mantid, and they are not even of the same genus. Tenodera aridifolia is the scientific name for the Chinese mantid, while the more usually found one is called Mantis religiosa, or European mantis. Little flags should be going up within your realm of curiosity... why is neither called an American mantis?

Apparently both of our local species have been introduced from afar, each from the land of their namesake.

The much more common one, European mantis, is usually bright green but may also be tan in colouration. The Chinese mantis is light brown, has a thin green line along the outer wing, and does not have those interesting black and white spots inside the forelegs.

A cool feature that both species possess is that their eyes go dark at night, turning a dark chocolate colour.

It was in 1896 that the Chinese mantis arrived in eastern North America, followed in 1899 by the European mantis, both deliberately imported to combat garden pests. In 1937, the European mantis was introduced to British Columbia, again to eat garden insect pests.

This was rather fascinating to me, as I've been witness to other insect introductions and have wondered what will happen in 100 years hence after they have been released to our wilds.

In the 1980s, two species of weevil were released here from Europe to eat purple loosestrife, and in 2013 a moth caterpillar was turned loose on dog-strangling vine. There have been many other introductions of insects to our natural environment, but few have been as deliberate yet unstudied as has happened with the mantids.

Two reasons the mantis population has remained fairly stable is that, one, they eat constantly so have little desire to travel widely. If your garden or meadow has other insects, the mantis will be content to hunt that area, eventually mating, laying eggs and dying in same couple of acres.

The second factor that limited their population was our cold, hard winters. Despite a unique egg case that is waterproof and almost bird proof, desperately cold weather could and did freeze many of the egg cases.

But our winters of late have are not been so desperately cold, have they? And this means that more egg cases have survived to springtime, and sure enough their populations reflects this change in the climate.

Back in 2012 a huge surge in mantis discoveries occurred in Sudbury, so noteworthy it made a few newspaper stories. The northern boundary of their traditional range is spreading, thanks to that subtle warming shift.

So now you know as much as I know about these rather unique insects. If the frost holds off for another week or two, you may still have an opportunity to find a mantis of your own.