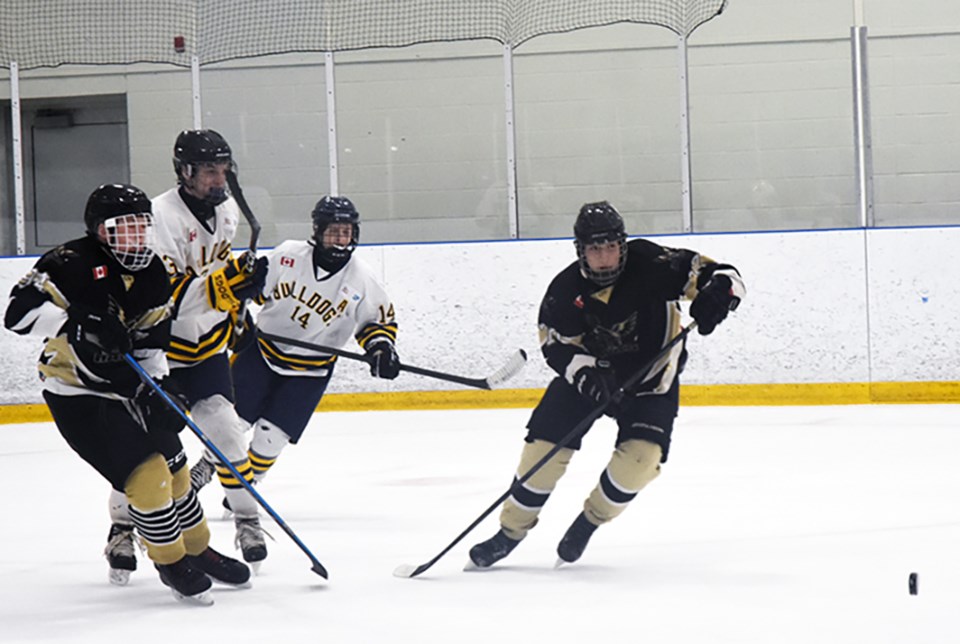 End-to-end action at the BWG Leisure Centre, in Game 2 of the OMHA Midget A quarter finals between Bradford and Quinte West. Miriam King/Bradford Today

Bradford’s Midget A Bulldogs have proven time and time again this season that they have the right stuff.

They played solid hockey in regular season play, dominated the series against a chippy King Rebellion to earn a berth in the OMHA quarter finals, and over-powered the Quinte West Hawks in the first two games of their quarter-final series.

The games have been marked by end-to-end action, precision passing plays, and determined attacks that  successfully out-manoeuvred a solid Hawks goalie.

After taking the first two games in the series, 2-1 and 3-1, the Bulldogs were back in Trenton for Game 3 on Feb. 20 – sweeping the Hawks, 3-0, as goalie Davonte Auger created an impenetrable barrier, blocking the Quinte West attackers.

After a scoreless first period, Carson Cameron (#25) put the Bulldogs on the scoreboard, to give Bradford a 1-0 lead.

Tyler Mumford (#14) stretched the lead to 2-0 in the Third period, with just over 4 minutes left on the clock in regulation play. Quinte West pulled their goalie for the extra man attacker, giving Cameron the opportunity to score again into an empty net, with 54 seconds left in the game.

The Bulldogs now advance to the OMHA Semi-Finals, waiting for the outcome of the battle between Orillia and Centre Wellington.

"We have a fast and talented team this year, with the potential to score a lot of goals," said Jeff Mumford, team manager. "After a strong showing in the Silver Stick Semi-Finals in January, the boys have turned up the intensity and will be ready for a tough opponent in the next round."

COVID-19: Home becomes school and workplace as students switch to online learning
Mar 30, 2020 8:55 PM
Comments
We welcome your feedback and encourage you to share your thoughts on this story. We ask that you be respectful of others and their points of view, refrain from personal attacks and stay on topic. To learn about our commenting policies and how we moderate, please read our Community Guidelines.