'The environmental due diligence is there, the economic benefits are there,' says councillor
Apr 22, 2021 4:00 PM By: Natasha Philpott 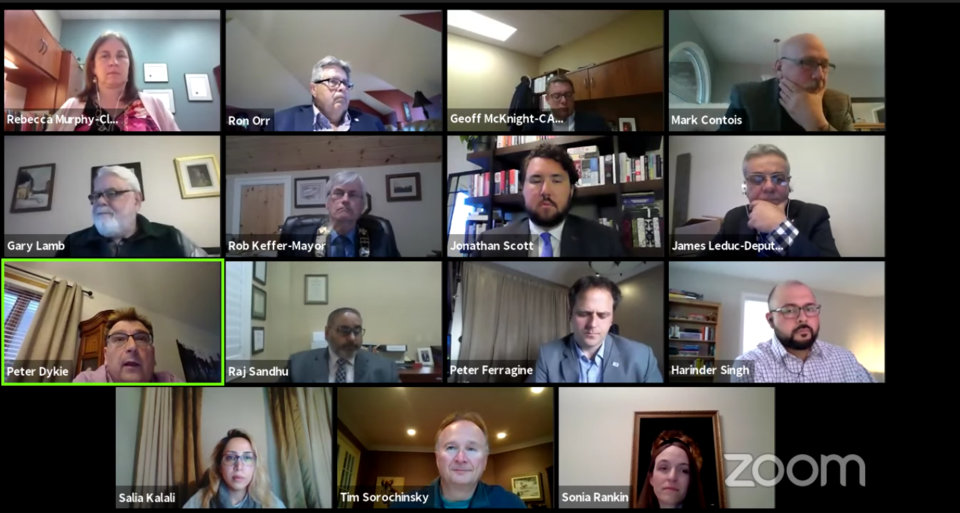 BWG Council hears from representatives of MTO and AECOM on the Bradford Bypass Project on Tuesday April 20. Screenshot

In Tuesday night's meeting of council, representatives from both Ministry of Transportation (MTO) and AECOM consulting presented information on the current status of the Bradford Bypass, and the next steps for the project - a 16.2 km controlled access highway connecting Highways 400 and 404.

Council expressed their enthusiasm for the much anticipated 'Bypass,' but not everyone supports the project.

Recently, concerns have been raised by environmental groups claiming Premier Doug Ford and his Conservative government are pushing the project through without updated Environmental Assessment studies. The existing EA was approved in 2002.

A number of those concerns were addressed during the council meeting.

Councillors were assured that the EA process will be followed, that there will be full public consultation, and that the project will comply with existing and future legislation, including the Endangered Species Act, Greenbelt Plan, Fisheries Act, Species at Risk Act and Lake Simcoe Protection Plan.

The presenters also pointed out that the route for the Bypass crosses the Holland Marsh wetlands at their narrowest point - where wetlands are only 1 km across - impacting an area of 10.75 hectares or  0.375 percent of the total Holland Marsh.

Coun. Raj Sandhu noted that the bypass project is "not just the star child of recent time" but has been in the works since the late 1970s and that it was former Liberal Premier Kathleen Wynne who put the project back into the province's growth plan.

"To me, both governments (Liberal and Conservative) believed in this project," he said. "And it's so refreshing when Tim (Sorochinsky from AECOM) mentioned the EA process will be followed and the narrowest point of the Holland Marsh is picked for this project because the environment is on the top of everyone's mind."

Sandhu encouraged residents to take part in the upcoming Public Information Centre (PIC) in May and submit their comments and concerns.

"Just to put it on Facebook...and vent, is not going to help," Sandhu said. "You need to bring your criticisms to the right people."

"Get all the information, get all the facts first and then add your input to help make it (the project) as good as possible," he said.

"When it comes down to the environmental part, we know it's being looked at thoroughly," said Ferragine, adding that he has spoken to farmers in the Marsh who are looking forward to the building of the bypass to help to move their product.

Coun. Mark Contois said the bypass is much needed, noting whenever there's an accident on Highway 11, traffic coming from the east side of town is halted, noting, "That's not appropriate for areas that need to grow. The province is looking for our communities to grow, so this is a responsible transportation route that allows that to happen."

He said that as an Indigenous person he is following the EA, and supports the work being done.

"Idling cars in Bradford on agricultural land, the prime agricultural land in Ontario - what is more detrimental to the lands? An idling car or a car that's passing through momentarily?" he asked. "I think this is responsible...and I look forward to your project."

Coun. Jonathan Scott asked for answers to questions raised by Margaret Prophet of the Simcoe County Greenbelt Coalition and other environmental groups, who have demanded a Federal Environmental Assessment for the project.

Scott asked whether there was any precedent for having a Federal EA carried out for a provincial highway, and the implications for the province if the Feds step in.

Salia Kalali from MTO responded there has never been a provincial highway that has been the subject of a Federal EA, and that it could have a "huge impact" on the process.

The Bypass does not meet the criteria for a federal EA, Kalali said - a statement elaborated by AECOM representative Sonia Rankin.

Rankin noted the project does not meet the minimum 75km length requirement for the right of way; does not impact federal lands; is not located within a wildlife area, marine conservation area or migratory bird sanctuary; and is not on lands administered by Parks Canada.

Scott asked about the "early works" that the province announced last month. that could get underway as soon as the fall of 2021, and how they would be in keeping with environmental requirements.

Kalali said the work could include things like bridge construction, bridge replacement, fencing, grading works or utility location, "anything that we can advance," she said - but noted that prior to commencement of any works, there is still a requirement to gather information about the environmental conditions, consult with the public and document the decision making.

"The whole process is in place, regardless of the early work," she said.

Scott also asked about sound mitigation plans, in the area where the bypass will cross the community.

"We have an extensive noise impact assessment as part of the study, in accordance with MTO's environmental guide for noise," replied Kalali. "Noise mitigation consideration is given to receptors that experience an increase in noise variance."

Scott was pleased to hear about projected 'secondary benefits' for the project, including conservation and the potential for the addition of active transportation trails.

"I'm hoping those are being taken into consideration because they would be a great benefit for our community," he said.

Kalali said there will be continued discussions with the municipalities on how to accommodate active transportation and trail crossings. She also noted the MTO is working with provincial ministries to discuss mitigation and potential compensation to the surrounding land.

Rankin explained that a preliminary landscape plan will be developed as part of the preliminary design, which will address municipal and natural environment requirements.

"It's an integrated process across multiple fronts," she said.

"This is a project that we need," said Scott, pointing out that the highway won't facilitate more residential growth but will catch up with the growth that has already occurred, and alleviate traffic in the downtown core.

"This is vital for our downtown revitalization so that can be a pedestrianized streetscape," he said, thanking the presenters for their information and comments. "The environmental due diligence is there, the economic benefits are there."

Coun. Ron Orr agreed, adding that he is excited to see the project go forward.

"This is something the area needs and the sooner the better that we can get it started, I think we will all be quite happy," he said.

Mayor Rob Keffer encouraged residents to get involved, submit their input and learn more about the bypass on the project website.

"I think the more you find out about the project, the happier you'll be about the environmental studies," he said.

Council voted unanimously to receive the presentation, and pass a motion supporting the Bypass, and requesting changes that would include an interchange at Sideroad 10, and a connection from the Bypass to County Road 88, at the 400.

Councillors also approved an amendment, encouraging the MTO to continue to work with the Ministry of Natural Resources and Forestry, Ministry of the Environment, Conservation and Parks, the area municipalities and the Lake Simcoe Region Conservation Authority to implement shoreline conservation, active transportation amenities and other secondary-benefit projects as part of the project.

To learn more about the project, visit the Bradford Bypass project website here.