Thanks to a federal government grant, the program is hiring two post-secondary students to be mentors. The deadline is June 8
May 22, 2018 9:00 AM By: Patrick Bales 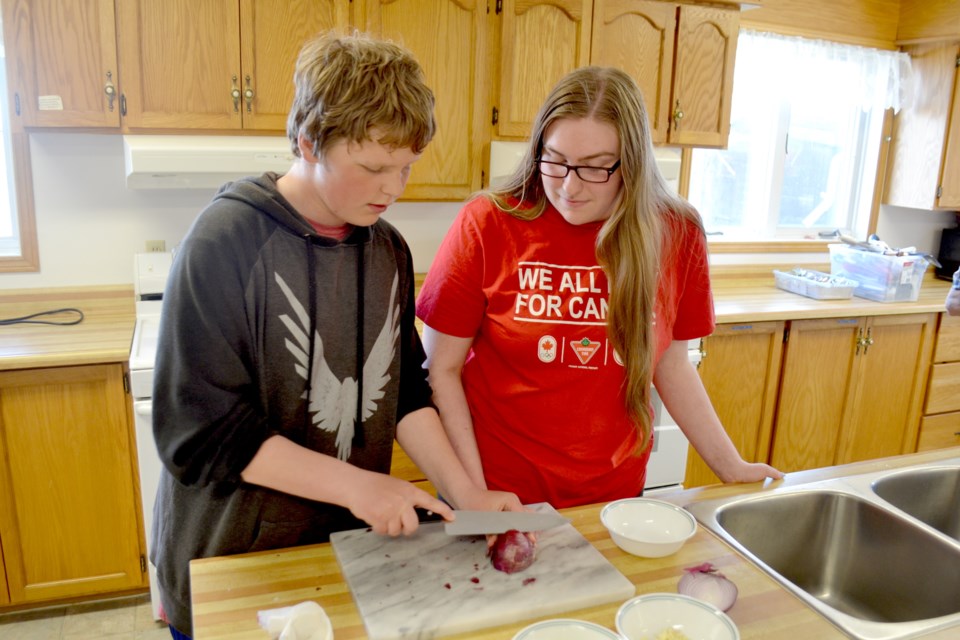 Robert Connors, left, shows his sister, Katie, a proper cutting technique, while helping to prepare a meal at the weekly Strengthening Youth and Community through Art drop-in at the Bradford Arts Centre on May 17. Patrick Bales/Bradford Today

Katie Connors wants to win a Duke of Edinburgh Award. Thanks to the Bradford Arts Centre, she’ll likely achieve that goal.

The international award highlights the accomplishments of young people between the age of 14 and 24, focusing on their own personal developments in a non-competitive setting.

Katie felt her love of art could lead her to become one of the more than 500,000 Canadians who have benefited from the program in the past 55 years.

Problem was, it wasn’t going to be cheap. Enter the arts centre.

“Because there was nothing here in Bradford, she was going to pay to do something at an arts school,” said Darlene Braybrook, art director for the centre. “We’re free, free, free. It’s brilliant that way.”

Instead, Katie can put in an hour a week at the centre and combine that with other volunteer opportunities throughout the summer to qualify for the award. She can share her love of art with other members of the community, young and old alike.

She is doing that every week at Strengthening Youth and Community through Art (SYCA), a program recently launched at the Bradford Arts Centre. Each Thursday, youth are welcomed into the centre for a free drop-in program. It is a safe space for youth to explore the arts, one they define on their own terms.

“It’s using arts a means to create a connection with youth,” said Rev. Jim Keenan. “Anyone can come. Anyone’s welcome. They don’t have to do anything if they come here. If they want to do something, they can move into it.”

The Bradford United Church started the centre in 2016. About two years ago, the church took a hard look at itself and its future, focusing on what its members supported and appreciated in Bradford. It found most of the congregation spent some of their time volunteering with artistic endeavours.

Since then, about $65,000 in renovations have seen the Barrie Street church — a downtown Bradford West Gwillimbury institution for 184 years — become a 21st-century hub for the community, a home equally for the arts as for the gospel.

“Our congregation can support itself; we’re a small but vibrant congregation,” Keenan said. “(With) a small congregation, (it’s) hard to justify and keep up, so it has to be functional in the larger community.”

SYCA — and the arts centre as a whole — helps find that functionality. It is a place where residents of Bradford can explore their artistic creativity.

Just what can be considered art is a fairly wide spectrum for those community members, including Katie’s younger brother Robert.

The W.H. Day Elementary School student and budding chef gets to help out in the kitchen each week preparing the meal all participants at the drop-in share to wrap up each session.

“I really enjoy cooking,” Robert said. “When I grow up, I want to be a chef, so I want to get down some of the basics.”

Last week saw Robert and his friends making homemade hamburgers. This week, he was making tuna casserole, from scratch. He also took some time to show his sister how to properly cut an onion.

Once summer vacation starts, the drop-in will expand to three evenings each week.

Braybrook, a lifelong educator, has seen the affect youth art programs can have, working both in Bradford and throughout southern Ontario. She has already seen progress in the few short weeks SYAC has been operating.

When the group was getting ready for the meal last week, Braybrook said one of the youth asked if there should be a place set for one of the volunteers from the previous week.

There was disappointment among the group when it was revealed that volunteer wouldn’t be joining them that week.

“They feel very comfortable with us,” she said. “It’s interesting. We basically all have grey hair and they’re warming up to us.”

Thanks to a grant from the federal government’s student jobs program, the arts centre will be able to hire two post-secondary students this summer to help mentor the youth artists. Applications for the visual arts mentor and the performance arts mentor roles can be emailed bradfordartscentre@gmail.com or sent by regular mail P.0. Box 148, Bradford, Ont., L3Z 2A7 by June 8.