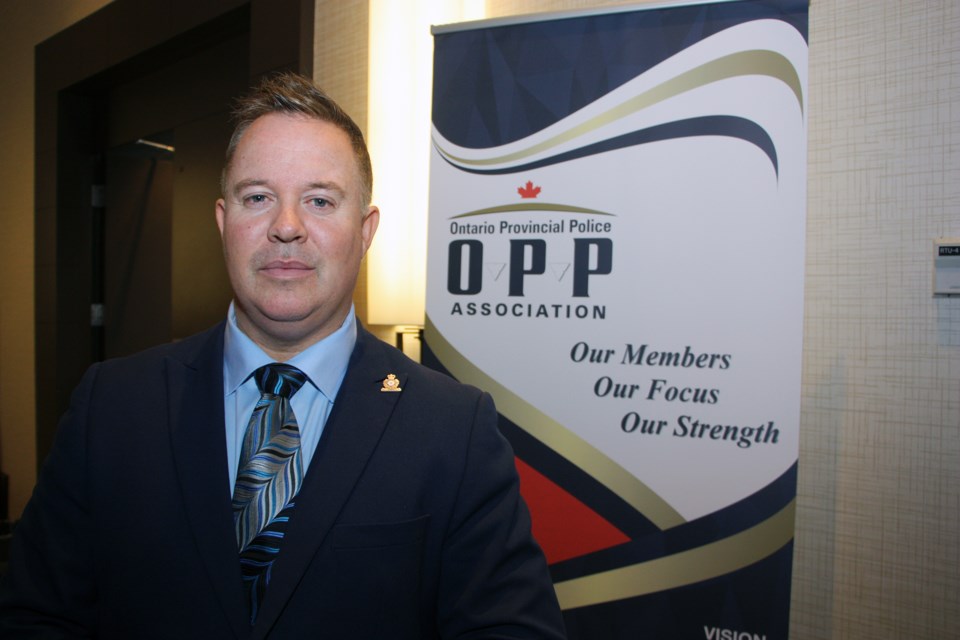 Rob Jamieson, president of the Ontario Provincial Police Association, said the group has been coming to Blue Mountain Village for a number of years now to host the annual general meeting. Erika Engel/CollingwoodToday

A large crowd of police officers gathered at Blue Mountain Village on Tuesday.

But it wasn’t for enforcement so much as engagement in discussion.

The Ontario Provincial Police Association (OPPA) hosted its annual general meeting at the village conference centre this week, which meant there were 150 officers and civilian members gathered for the event.

Rob Jamieson, president of the OPPA for the last three years, said the association represents 10,000 members and tends to meet at the Village on an annual basis since there’s a large enough room for the crowd, and they like the service offered by the conference centre.

Jamieson said the group had several discussions on various topics such as Bill 175 (a bill passed by the Kathleen Wynne government, then stopped by the Doug Ford government, meant to update the Police Services Act).

They also discussed health and wellness, and particularly officer suicides.

“This organization is deeply impacted by those issues,” said Jamieson, adding there was a case this year of three officer suicides in as many weeks.

“It’s really been a focus to talk about support, reduce the stigma, and get real about mental health,” he said.

Premier Doug Ford delivered a speech on Tuesday morning (Oct. 16) at the AGM that was heavily focused on cannabis legalization in effect Wednesday.

Jamieson said it is common for the sitting Premier or other top-ranking government official to attend the AGM and deliver a speech. He said he’s had Kathleen Wynne and Andrea Horwath speak at past AGMs.

“The Premier and I have met before,” said Jamieson. “We’re going to hear what he and his government’s vision is for the future as it pertains to law enforcement.”

Ford also touched on his government “putting the brakes” on Bill 175, funding for new police detachments in Ontario, and replacing the OPP radio system.

The OPPA is the bargaining agent for uniform and civilian members of the Ontario Provincial Police under the rank of inspector.