The group of concerned parents have had their request to move a bus stop located in front of the BWG Library denied twice by the SCSTC and Simcoe County District School Board
0
Feb 13, 2020 10:30 AM By: Natasha Philpott
Previous Next
1 / 1 The bus stop located on Brian Collier Way. Submitted photo.
Expand
Previous Next

A group of concerned parents were disappointed to learn that their request to move a school bus stop has been turned down again, and their appeal denied.

Back in October 2019, the stop for the bus which transports students to and from W.H. Day Elementary School, was relocated. The stop had been located in the parking lot at the BWG Leisure Centre; for "safety reasons" it was moved to Brian Collier Way, in front of the BWG Library.

Parents complained that the new bus stop was not only still unsafe, but also inconvenient.

David Pullara is one of the parents who has spearheaded a campaign to have the bus stop moved.

He noted that most of the students are driven to the bus stop, and that since the change, parents have been having difficulty in finding convenient parking spots. They are also concerned about the amount of traffic on Brian Collier Way as their children get on and off the bus.

“The only parking that’s available that’s safe and legal is across the way at the community centre, which requires us to get out of our car, carrying our younger children with us, to get them out of the car and walk to the stop,” he explained.

Kids in grade 4 or below must be met by a parent or guardian at the bus stop or they are not allowed to disembark, which means that waiting in the car for the children is not an option for the parents.

After doing some research, Pullara sent the Simcoe County Student Transportation Consortium (SCSTC) a list of alternative stops that fit the guidelines of the consortium. One of those stops is about 40 metres to the east, where Brian Collier Way turns south toward Holland St. West, just before the steps to Bradford District High School. (Photo attached below).

“It meets with all the guidelines, but it has a parking lot at the leisure centre and library," Pullara said.

The SCSTC still insists the current stop is preferable, he noted.

“The reason they gave us (for keeping the current location) is because it has a wider sidewalk and it has shelter,” said Pullara. “Our point of view is they’re putting wider sidewalks over convenient parking for parents, which I think is ludicrous."

Hilary Philpotts is another parent who picks up her children at the stop. She said she is most concerned about their safety, because of the surrounding snowbanks and the traffic.

"People are parked anywhere. It's awful - you see kids running across (the road)," Philpotts said.

She supported moving the bus stop further along Brian Collier Way. "You can easily pull up to that next stop sign. It's not in anyone's way," she said.

Another parent, Tatiana Dyblenko is also unhappy with the new bus stop location.

"I am concerned about safety of students boarding on a bus," she wrote in a letter to Chief Executive Officer and General Manager of the SCSTC John Barbato last month. "The pick up/drop off intersection is very busy with an all-way stop sign."

Dyblenko added, "Personally, I have observed a few times that the car with an immature driver inside was not stopping, but only slowing down at the stop sign, and then significantly accelerating afterwards. To me, the current bus stop location possesses safety hazard for all students boarding on a school bus."

On Dec. 10, a survey was sent out by the principal of W.H. Day Elementary to the families of students on the bus route, asking if they either agree or disagree with the new proposed location. A note indicated that all families must be in agreement, for the stop to be changed.

When Pullara followed up with the SCSTC to find out the results of the survey, he was told that not all parents were in agreement - although he was not provided with actual numbers.

Barbato said that the current stop in front of the library meets all of the guidelines as outlined by the Simcoe County District School Board (SCDSB).

Parents are currently finding alternative ways to deal with the situation, noted Pullara, including parking illegally in the handicap spaces at the library, and on the side of the road on Brian Collier Way, in both directions.

In a letter to Pullara, Superintendent of Education for the SCDSB Douglas Paul said that it is the parent's responsibility to ensure the safe arrival of their children at a bus stop. It is not mandatory for school boards, under the Education Act, to provide transportation to all students, he wrote, but only to provide a consistent policy that applies to all students.

Paul also noted that he visited the site on Thursday Jan. 9 and found no issues with the stop.

When Pullara questioned what time the visit took place, he did not receive a response.

“The most frustrating thing about this process is that I’ve spent countless hours putting together rational arguments trying to offer solutions and it keeps falling on deaf ears,” said Pullara.

Barbato noted that the SCSTC provided other options for the families, including access to an alternate existing bus stop.

"The families that have contacted the Simcoe County Student Transportation Consortium (SCSTC) have been provided options for their consideration that meet with related school board and SCSTC policies, including access to an alternate existing bus stop," said Barbato.

He noted, “The SCSTC reviewed the current bus stop location in response to the concerns identified and has confirmed the current bus stop meets all legislative requirements under the Highway Traffic Act (Ontario) for the establishment of a school bus stop and is consistent with other centralized program bus stops throughout Simcoe County. The responsibility to confirm if the identified bus stop is safe for an individual student lies with that student’s parent/guardian.”

As of now the stop remains where it is, leaving Pullara and a group of about 15 other parents frustrated and angry.

Bradford Today also reached out to the BWG Traffic Committee. Chair, Coun. Gary Lamb noted that the issue is for the consortium to ultimately decide - and they have no plans to move the bus stop location.

BradfordToday reached out to Paul for further comment and is awaiting a response. 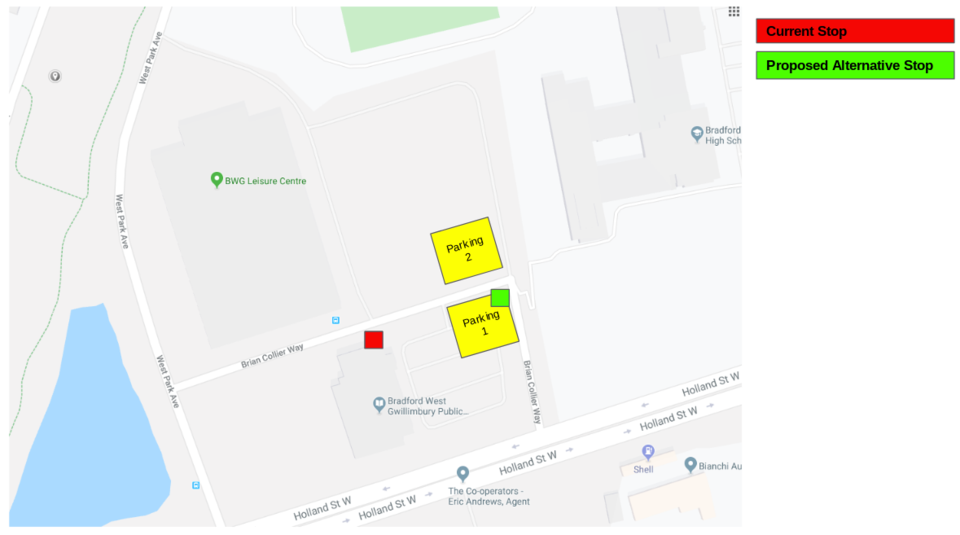 $100,000 winning Encore ticket sold in Simcoe County
Feb 26, 2020 11:00 AM
Comments
We welcome your feedback and encourage you to share your thoughts on this story. We ask that you be respectful of others and their points of view, refrain from personal attacks and stay on topic. To learn about our commenting policies and how we moderate, please read our Community Guidelines.