Rascally rabbits are everywhere this year

Outdoors columnist David Hawke explains the high numbers are just part of the regular life-cycle for rabbits and hares
0
Aug 20, 2019 10:30 AM By: David Hawke 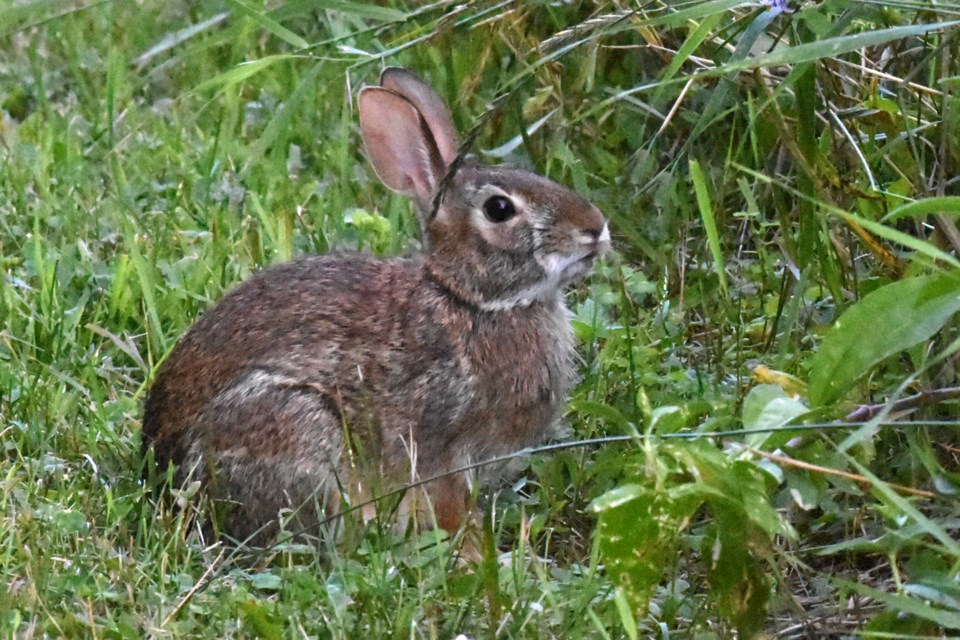 This cottontail rabbit is part of large crop of rabbits this year. David Hawke/OrilliaMatters

The vegetable garden had looked great the evening before ... not so much the next morning as almost the entire row of green peppers had been mowed down.

A series of green stubs marked where these plants had been nurtured along, once giving us hope of obtaining fresh produce. But now visions of rabbit stew filled my mind.

Every eight or ten years, the woodlots and backyards of our region erupt in rabbits. Rabbits on the lawn, rabbits in the garden, rabbits crossing the road, dead rabbits laid at your feet by the family cat, and well, just rabbits everywhere.

This is a natural cycle with the realm of nature, and peaks within a fairly regular period.

This high population often means that the predator population is low, and sure enough, coyotes and foxes have been victim to mange over the last couple years. Not all of the coyotes and foxes, but a lot of them, leaving the survivors and the occasional great horned owl to keep the lid on the rabbit population.

Without constant control, the bouncing bunnies breed, well, like rabbits, and there you have it.

Within a year or so these cottontails will be back to 'normal' levels as their current abundance is ensuring the healthy survival of this year's kits, cubs and owlets.

These "bunny-rabbits" are very adept at finding a home in urban areas. Whereas their big cousins, snowshoe hares and European hares (also called 'jack rabbits'), like to be out in the wild lands, cottontail rabbits prefer to burrow under garden sheds or overwinter beneath that tarp you threw over the yard-tools last fall.

Since I'm throwing these terms at you, perhaps a moment is needed to figure out what makes a hare a hare, and a rabbit a rabbit. Biologically, they are both part of a group of mammals known as lagomorphs. Pikas are also part of this group, but we don't have them here, so I shan't discuss them.

Lagomorphs are kind of like rodents, but not really. One of the easiest ways to tell them apart is to look at their teeth: rodents have two upper teeth used for nipping off twigs, and these teeth have orange enamel on the front; lagomorphs have four upper teeth (two very small ones are hidden directly behind the larger ones) and have enamel on both sides of the tooth.

So next time you're out doing some rabbit-wrestling, take close look inside their mouth... quite amazing, actually.

To separate the rabbits from the hares, you need to study their home life: hares give birth to fuzzy young on the bare ground, while cottontails produce naked little guys in an underground burrow (which, if you hail from England, is called a warren; which, if you be from around these here parts, is called a rabbit hole. Woe, the demise of the English language).

Because cottontail rabbits stay brown year round, they can be a bit easier to see if you are a hawk, owl or coyote; which may be a factor in their fluctuating populations.

And rabbits tend to be a bit more skittish than their white-furred cousins the hares, and movement is a dead give away to one's location... the emphasis being on the word 'dead'. Perhaps this is why snowshoe hare tend to have a rather smug look upon their face, sensing they are better evolved at predator deception.

To move about their home territory both rabbits and hares will traverse the area in detail, locating every little hiding spot and place to find food. If a good feeding area is found near a good hiding spot, a trail between them is soon packed into the grasses.

When the native peoples, settlers and trappers grew hungry, a snare set on a rabbit runway often provided a nutritious meal.

Although the snowshoe hare changes colour from winter-white to summer-brown, both European hares and cottontail rabbits stay brown all year round.

Also, cottontails have a patch of rusty colored fur on the nape of their neck (I have no idea why, but there it is).

The high numbers of cottontails this year should give you ample opportunity to observe one of our common, but often hard to see, natural neighbours. Next year, it may not be so easy, as these population swings happen rather rapidly.

However, next year maybe we'll have green peppers to eat straight from the garden.