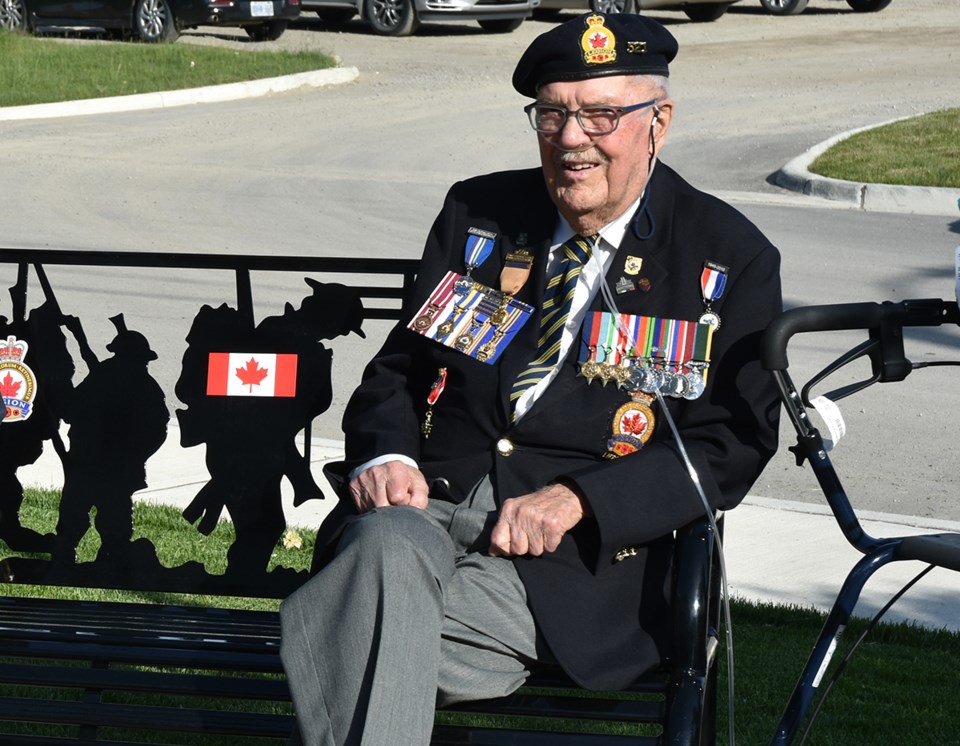 Bert Hogg at the June 8 unveiling of the new veterans’ bench at the Bradford legion on Back Street in Bradford West Gwillimbury. Miriam King/Bradford Today

For many Bradford West Gwillimbury elementary students, Albert “Bert” Hogg was their first real connection to Remembrance Day and the Second World War.

The veteran and member of the local Royal Canadian Legion was a frequent and honoured guest at school remembrance assemblies, vividly sharing his experiences as a medic and stretcher-bearer in the war.

Bert Hogg passed away on June 20 at Royal Victoria Regional Health Centre in Barrie, in his 96th year.

As a teenager, Bert added a couple of years to his age to sign up for the militia in 1938, and then enlist with the Canadian Armed Forces in 1939.

He served in North Africa, Italy, Sicily, France, Belgium and Germany for the full duration of the war.

When he moved to the Gilford area, he became a member of the Bradford legion and participated in local events and activities, including the presentation of Remembrance Day poetry and poster competition awards to school children, and the recent unveiling of a veterans’ bench at the legion.

Legion branch 521 president Mike Giovanetti called Bert “a very welcomed comrade to our branch. He was loved by all who met him, and will be missed and never forgotten.”

Donations to his memory can be made to the Hospital for Sick Children in Toronto.

Hogg was also a member of the Danube Seniors Leisure Centre in Bradford.

“He was the most friendly man I ever met. He had a smile and a good word for everyone he met,” said Peter Blakemore, a fellow member. “He loved to tell jokes. (He was a) happy, smiley character.”

Hogg also shared his remarkable military memories through TheMemoryProject.com, a project of Historica Canada — a speakers’ bureau established to disseminate stories and photos of veterans and members of the Canadian Armed Forces in schools and at public events.

As a medic, Hogg treated not only soldiers, but civilians.

In The Memory Project, he remembered treating a girl in Italy, who had picked up the detonator of a grenade. It exploded in her hand.

“With the equipment I had, the sterilization method I used for boiling instruments and things, I had to remove the two fingers from her hand and bandaged her up because she was wrapped in a piece of ordinary brown paper, wrapped around her hand because they did not have any method of treating her… Left her with plenty of bandages and stuff, and cream and sulfa (an antibiotic),” he said.

“I never heard from her again, so I don’t really know how she made out, but we often thought of her.”

— With files from Jenni Dunning