'Someone at some point is going to get killed'

A Bond Head resident has urged Bradford council to install a stop sign at Line 7 and Lallien Drive, or at Line 7 and Dixon Road due to excessive speeding in the area
May 7, 2018 9:00 AM By: Jenni Dunning 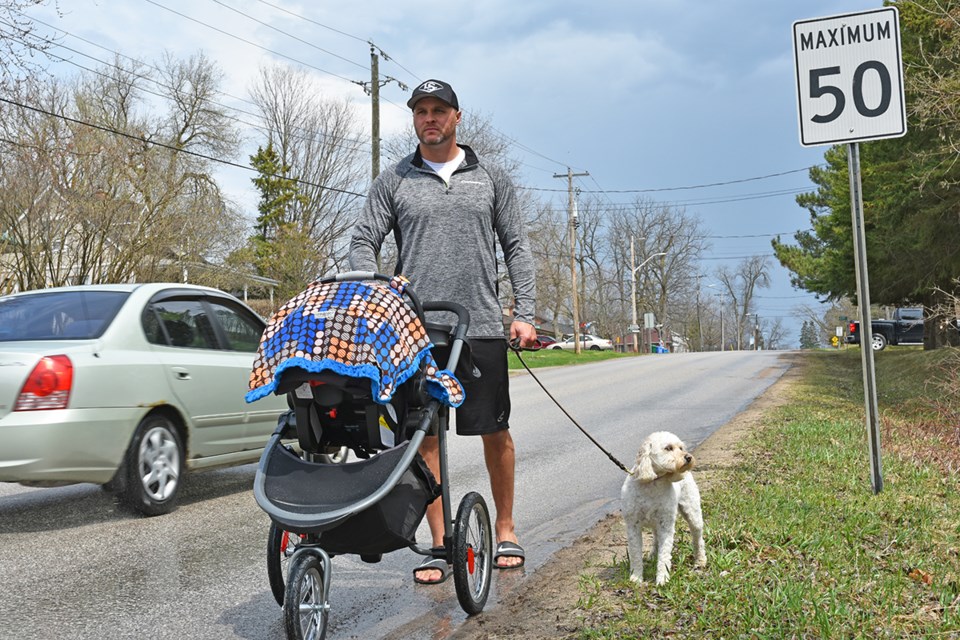 Bond Head resident Bret Foisy, out for a walk with newborn son, Cruz, and Pearl the cockapoo. Foisy asked Bradford West Gwillimbury council to do something about the speeding problem in his neighbourhood. Miriam King/Bradford Today

After being nearly run down by a car while out for a walk with his newborn baby, wife and dog, Bret Foisy said Bradford West Gwillimbury needs to curb the speeding problem in Bond Head.

Many residents are afraid to walk around parts of the area because Line 7 is often used as a throughway to County Road 27 and Highway 400, he said.

When his son was only six days old, his family was walking to his mother in law’s house on Line 7 when a car trying to pass slowing traffic nearly hit another car attempting to turn into a driveway.

“The car turning … came at us. Here I am with my small dog, newborn child and my wife, and we’re mere feet from being hit by a car,” he said.

No one was injured, but “this was the last straw for me. There’s no sidewalks. There’s no shoulders on the road anymore (as) they’ve deteriorated over the years. What I do suggest is some kind of barrier to prevent drivers from going 100 km/h.”

Foisy was at Bradford council May 1 to urge the town to install a stop sign at Line 7 and Lallien Drive, or at Line 7 and Dixon Road.

Council requested a staff report on the issue, which will come back to council at a later date.

“Anyone who lives there knows this is an unsafe area. We try to avoid Line 7. We call this Highway 7,” said the York Region Paramedic Services platoon leader, adding no one will walk to the Bond Head post office “because it’s unsafe.”

“Someone at some point is going to get killed.”

Speeding in Bond Head has been an issue for decades, said Debbie Bergin, who has lived on Line 7 for 33 years.

“It was always a concern for the residents living around here when they talked about development around us. The golf course increased it (seasonally). It’s just increasingly got worse and worse and worse over the years,” she said.

With three adult children and three grandchildren, and another on the way, Bergin said she is uncomfortable walking with them to a nearby park, and she would like to see a stop sign or speed bumps installed.

After years of complaining to the Town of Bradford West Gwillimbury, however, she said she is “not optimistic” anything will be done.

Bradford council considered installing a four-way stop sign in the problem area about 10 to 12 years ago, but they “convinced” residents it would make too much noise with cars stopping and starting all the time, said Brian Newbigging, who has lived in Bond Head for 45 years.

The town did extend some of the pavement as a “makeshift sidewalk,” he said, “but people just think it’s an extra place to park.”

He said he would like to see an increased police presence, especially at rush hour when speeders are most likely to come through the area.

Dan Stiver, who has lived in Bond Head for 42 years, said he is frustrated by how dangerous Line 7 has become.

“I can’t let my grandchildren out the front here. It’s bloody ridiculous now that the golf course is open. It’s dangerous to back out of your damn driveway,” he said.