Town is bringing in the big guns to fight invasive Phragmites 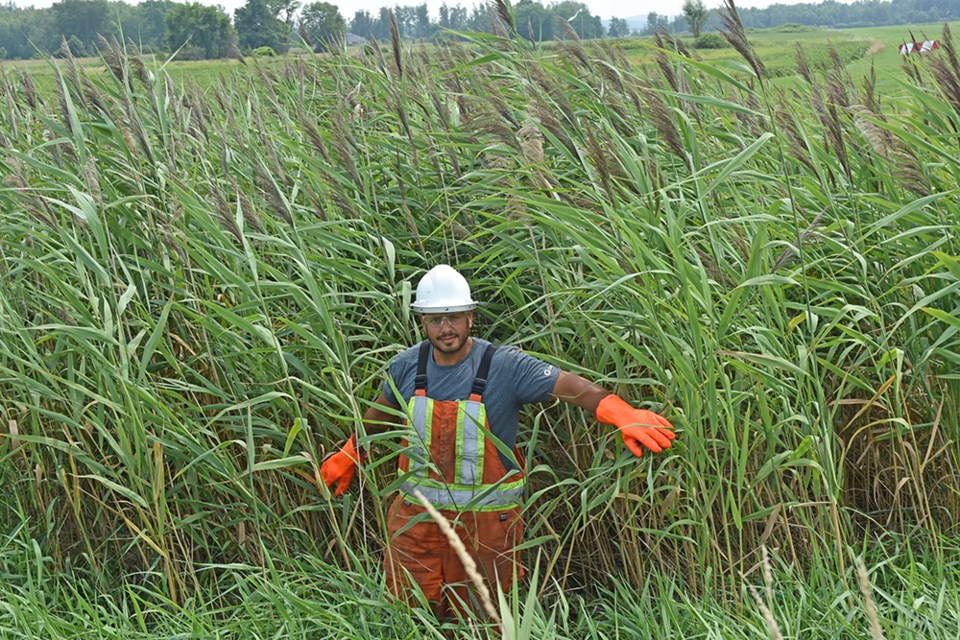 Two years ago, the Town of Innisfil did something that few other municipalities had attempted: Staff logged the location of every stand of invasive Phragmites australis, the Common Reed, on municipal lands and roadsides.

Phragmites, native to Eurasia, grow to a height of nearly five metres and can spread rapidly, forming dense stands that clog ditches and stormwater ponds, obstruct sightlines at intersections and take over wetlands.

The reed is also known to exude a phytotoxin from its rhizomes or roots that is poisonous to other plant species.

Phragmites were found in more than 100 locations in Innisfil, along municipal and Simcoe County roads.

The mapping formed the basis for last year’s pilot project, a partnership between the County of Simcoe and the Town of Innisfil, to control Phragmites using pesticides containing Glyphosate.

Now, the town is assessing the impact of that first year, as it starts on Year 2 of the pilot.

“We think it was very effective,” said Jeremy Nyenhuis, Innisfil’s Stormwater Project Manager. “The majority of locations we did treat last year, we haven’t seen any regrowth.”

The exception is along the edges of the stands and on private property where the contractor was not allowed to spray.

“We don’t have exact numbers” but it appears the spraying was “85-90 percent effective,” he said.

Year two of the three-year pilot project was slated to begin sometime between July 29 and Aug. 23, when the contractor would be spraying along approximately 460 lane kilometres of county and town roads, from Lake Simcoe to the town’s western boundary.

The goal is to target the old patches and any new Phragmites growth.

Due to uncertain weather and heavy rain storms, the spraying was delayed, but should begin soon.

“We’re hoping the end of this week or next week,” Nyenhuis said.

The contractor will be using primarily Roundup WeatherMAX with Transorb 2 Technology liquid herbicide, which contains glyphosate.

It’s effective, but it does have its limits, Nyenhuis said.

Due to environmental concerns, it can’t be used close to the water. Along shorelines and in wetlands, control has to rely on other, more labour-intensive methods, including cutting or wicking.

But the success of the spraying so far gives hope that the spread of Phragmites, especially along roadways, can be controlled.

BEYOND LOCAL: Pads and tampons can harm the environment. Are there alternatives?
Feb 26, 2020 8:55 PM

South Simcoe police unveils new drone
Feb 26, 2020 6:30 PM
Comments
We welcome your feedback and encourage you to share your thoughts on this story. We ask that you be respectful of others and their points of view, refrain from personal attacks and stay on topic. To learn about our commenting policies and how we moderate, please read our Community Guidelines.