Earthworms' appetite for dead foliagemeans there is no protection for maple keys, oak acorns other tree seeds, leaving space for invasive plant species to thrive
Apr 19, 2021 7:30 AM By: David Hawke 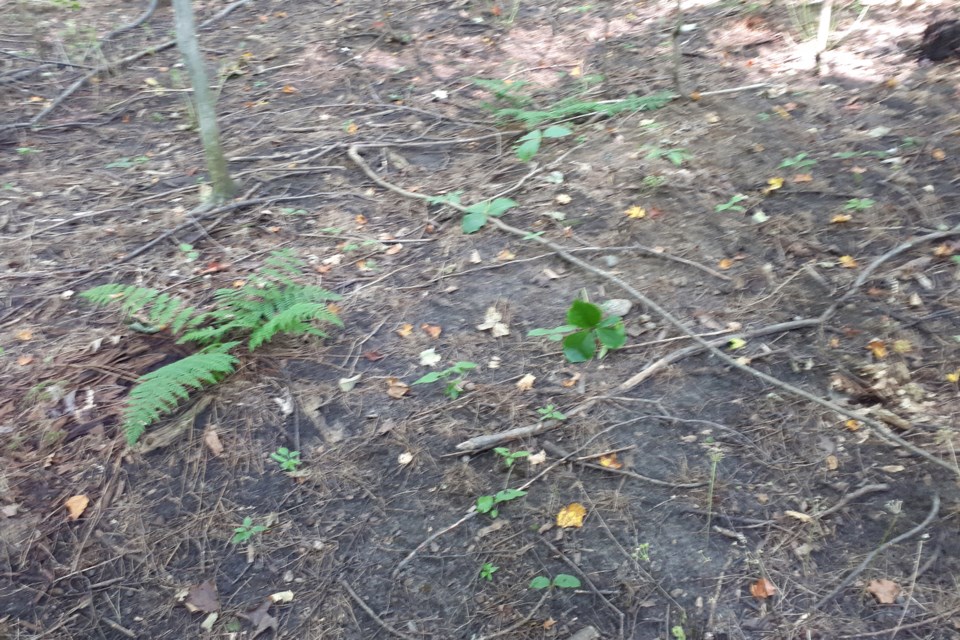 When earthworms invade a woodlot, it's bad news for the trees. Barren soils are poor places for new trees to grow.David Hawke/OrilliaMatters

What has five hearts, no lungs, legs or eyes, and is living in your lawn and garden? Hey, no fooling you is there? Yes, you’re right… earthworms!

Now that the frost has melted out of the soil and warm(ish) spring rains have saturated the turf and garden, earthworms are once again actively engaging with soil manipulation.

For gardeners this is great news, but for foresters this is a disastrous event; earthworms are bad news for forest ecology and there is no stopping them.

Here’s the beginning of the problem: all of our local earthworms are classed as ‘non-native’ or alien to this region; which means that all 16 or so species found underfoot have been introduced.

This story, once again, goes back to the time of glaciation, about 12,000 years ago) when the area we now call southern Ontario was under a couple kilometres of thick ice cover. If there were any worms living here prior to the glaciers sliding by, they were wiped out from the heavy pressure, freezing temperatures and bulldozing effects of the ice fields.

Yet earthworms are everywhere today, found in gardens, lawns, bait buckets, fields and forests. So how did they get here? Easy answer… humans.

As European colonists arrived they brought with them food plants and soil; as the ballast from sailing ships was off-loaded along the St. Lawrence huge piles of European-based soil were deposited. And within hat soil lay worm eggs or worms themselves. Thus the invasion began.

Left to their own devices, worms extend their home range by about one kilometre every 100 years. Yet in the 400 years since colonization earthworms now are common throughout all of the southern half of Ontario and within all States that border the Great Lakes. So much for leaving them to their own devices.

And here’s the next step in the problem: our local forests have developed and evolved in a fairly natural order since that glacier melted away. The forest floor has received multitude of layers of dead leaves each autumn and these leaves have slowly decomposed with help of bacteria and springtails.

Often the new layer of fallen leaves became thicker than the previous year’s leaves could be fully broken down, resulting in a thick and spongy forest floor.

Within that spongy layer tree seeds could set root and wildflowers flourished in the rich humus. Without an army of worms eating the dead leaves an ecology established itself and forests grew in a natural order.

However, earthworms have now been introduced to the region and they love to eat dead leaves… lots and lots of dead leaves.

This appetite for dead foliage has resulted in many forests no longer having that natural nursery floor but rather looking like barren black soil waste lands. This rapid removal of the leaf layer means there is no protection for maple keys, oak acorns or other tree seeds. Any seeds that are produced are quickly found and eaten by seed eaters with very low occurrence of new trees being produced.

As the forest floor is now exposed it becomes great growing ground for garlic mustard, and buckthorn and honeysuckle shrubs, all three being invasive plant species that further weaken the natural ecosystem of nutrient transfer to mature trees.

So who’s to blame and what can be done? Short answer: everyone and nothing.

As worms do indeed aerate the soils of lawns and gardens they are a benefit to have within those types of habitats and folks will continue to enjoy worms in the lawn (which makes one wonder what did the robins eat prior to the establishment of lawns in Upper Canada? Were robins even here prior to colonization?).

Earthworms are also dispersed via soil dumping, as new housing areas are stripped of topsoil and the dump trunks cart off tons of the stuff to be left in areas far beyond the worm’s original homestead.

As game fish love the taste of a worm on a hook, anglers utilize worms as bait. (Did you know that about $110 million dollars’ worth of Canadian-raised bait worms are exported to the United Sates every year?).

That big juicy ‘night crawler’ or ‘dew worm’ that you plucked from the lawn the night before the big fishing trip will come in handy to catch a bass, but at the end of your day the dumping of the bait bucket is simply transplanting these European worms to a new location.

Worms can survive underwater for extended periods of time (they don’t like it but can do it), and can also withstand drought and frost. Therefore, to limit the spread of these left-over bait worms, it has been suggested that they should be frozen in your freezer and then disposed of in a plastic bag with the trash. Yeah right, like that’s going to happen… a whole lot easier to just upend the bucket on the shoreline.

Another species of earthworm is the one used in vermicomposting. Vermicomposting is using worms in a container to eat your kitchen waste, and works quite well as long as you are diligent with the management of your worm farm. The worms sold for this process are called “Red Wigglers”, which should bring a smile to your face as you recall the TV sitcom “WKRP in Cincinnati” and their main radio station sponsor was “Red Wigglers – the Cadillac of Worms”.

Once an earthworm colony becomes established it is impossible to eradicate them, so best action is to restrict the spread of them to any remaining ‘wormless woods.’