Want to feel safer as a pedestrian? There's an umbrella for that

Meet John Vickers of Newmarket, who was compelled to bring his idea for a life safety umbrella to market after the shocking rise in pedestrian accidents across the GTA
0
May 26, 2019 1:30 PM By: Natasha Philpott 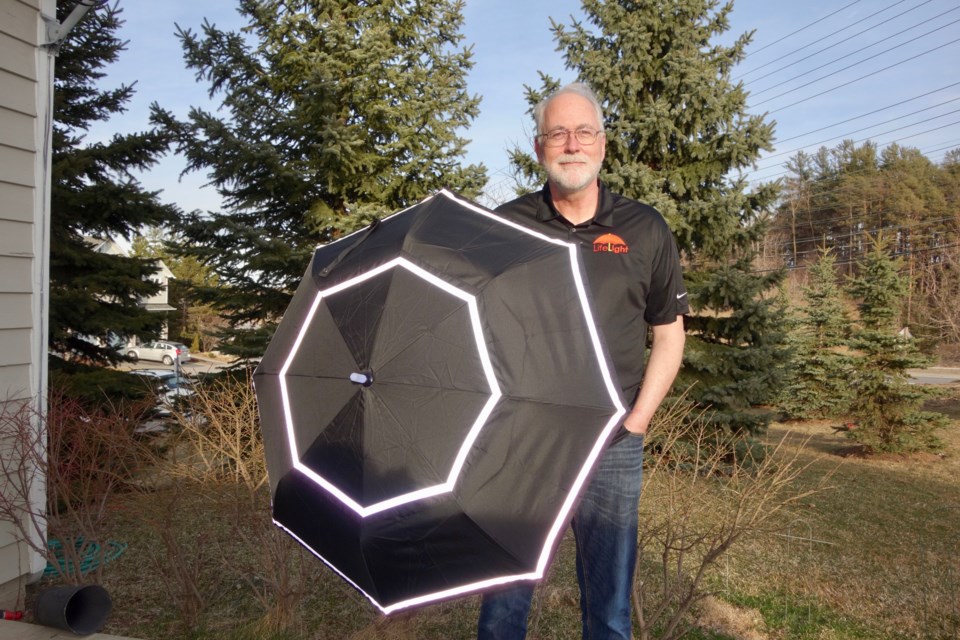 Seventeen pedestrians were struck by vehicles in the GTA in one night during a rainstorm last fall.

That news both shocked and dismayed Newmarket resident John Vickers, but it also compelled him to move forward with an idea he had for a product that would make the streets safer for pedestrians when it’s dark and, particularly, when weather conditions are poor.

“That story was kind of a catalyst for me,” said Vickers, whose background was in safety and protection technology. “It’s unbelievable that in four hours 17 people got struck around the GTA in one evening.”

Literally every day across Canada and the United States, pedestrians are being injured and killed in collisions with vehicles, he knew.

In York Region, nine pedestrians were killed in 2018. Close to home, last January, a Newmarket woman was fatally injured when she was struck by a vehicle while crossing Davis Drive.

LifeLight Umbrella, the world’s only collapsible umbrella designed specifically for pedestrian life safety, was launched about three months ago, attracting consumer and media attention, he said.

Its unique feature is a bright flashing LED light at the top of the canopy, which is useable even when the umbrella is collapsed. It also has a built-in LED flashlight on the handle. The canopy is made of a two-layered reflective trim, which can be seen from 140 metres away when a vehicle light hits it.

The umbrella is also designed with a windproof system that allows air to flow through the vents in the upper canopy, which prevents it from collapsing. Under the canopy, there is a technology pocket, into which you can insert a Bluetooth tracker so you are able to locate your umbrella at all times.

“When you look at all the different reasons (for the collisions), the congruency is people aren’t being visible — the one common thing is the driver, even if he’s drunk, did not see the pedestrian.”

Certainly, in York Region’s fatal collisions in 2018, the major contributing factor was inattentiveness.

Drivers are inattentive, stressed and aggressive, and pedestrians are equally as inattentive or careless about their surroundings, earbuds in and wearing dark clothes.

Vickers said he worked with a manufacturer overseas to develop a prototype for the umbrella.

“I was really humbled (by the response) when we first got going,” Vickers said. “I think people just like that is a simple idea, but taken to the next level in terms of something that adds to public safety.”

“Most of the orders are for more than one umbrella — it’s kind of a unique gift,” Vickers said, adding he knows many of his customers are mothers buying for the sons or daughters working in downtown areas, as well as daughters and sons purchasing it for their older adult parents.

Vickers isn’t one to sit still, and he acknowledges he has never been hesitant to carry a good idea to fruition.

“Creativity has always been a part of my life, you could say.”

For more than 20 years, his Pumpkin Art event was Canada’s largest Halloween pumpkin display, he said.

“I’m actually a world-famous pumpkin carver,” he added with a grin.

Prior to moving to Newmarket in 2017 for a job relocation, he lived in Victoria, B.C., working as a sales executive with Bell Smart Home and well-known as an active community member.

“I was a community leader guy in Victoria,” he said. “Always trying to connect people to their community.”

He formed a non-profit group, serving as executive director, and launched the Victoria International Buskers Festival in 2011, he said. Five years later, it boasted an attendance of  200,000.

“Within four years, in a 16-week period, I had three international events with 200 volunteers each time,” he said.

After the job for which he moved to Newmarket ended shortly after he settled here, Vickers decided to take the time to devote to his fledgling startup.

“Instead of going right back into the workforce, I thought, ‘I have some time’. ... I feel very passionate about this, about making it safer for people.”

He continues to explore options for his LifeLight umbrella, including a version he is testing with a Bluetooth tracker attached, currently available on his Amazon store.

He is also working on introducing a longer handled umbrella, and is toying with the idea of adding a UV-blocking treatment.

And there’s that other idea, too, about a “safety clothing line” with similar design and technologies as the umbrella.

Vickers said there’s nothing better than having someone tell him that his product helped keep them keep safe.

“One of the things that always attracted me on the security space as a career is there’s a feel-good part (because) you’re making a real difference in people’s lives and making them safe,” he said.

— with files by Debora Kelly