Eradicating polio has proven to be trickier than expected, with outbreaks of vaccine-derived poliomyelitis
Jan 11, 2020 3:00 PM By: Miriam King 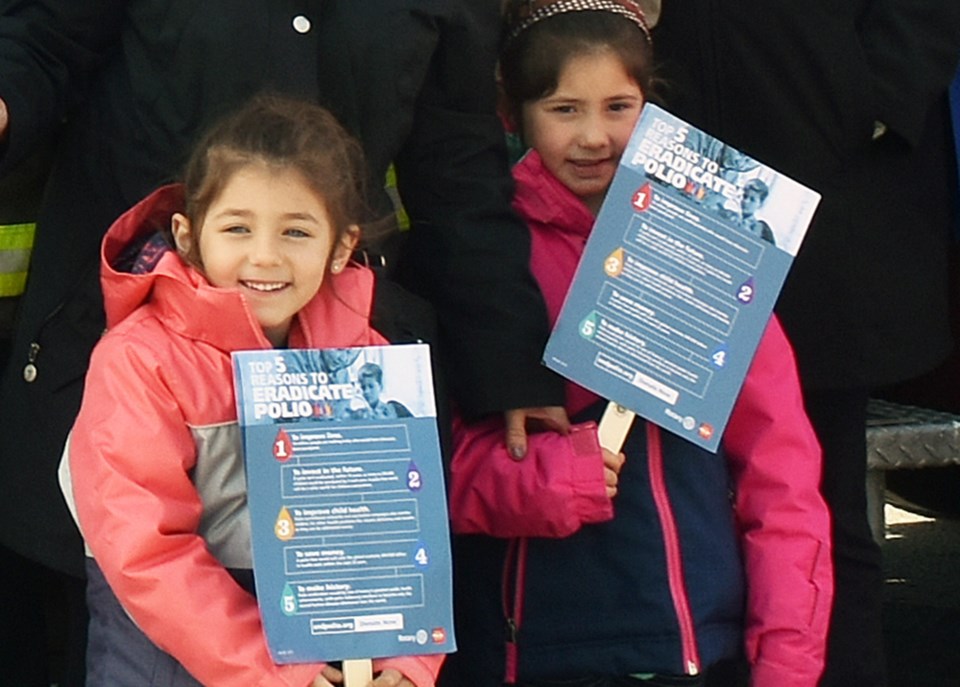 Children are most at risk of polio, globally. Here, kids participate in the Walk to End Polio Now, in Innisfil last year. Miriam King/Bradford Today

There has been a downside to the Global Polio Eradication Initiative.

While the campaign has been successful in eliminating outbreaks of “wild” naturally-occurring strains of Polio, there has been an increase in vaccine-derived poliomyelitis, a disease that can cause paralysis, and even death.

The issue arises because the oral vaccine used – while inexpensive, easy to transport and to administer – has been known to cause cases of poliomyelitis in some individuals. The vaccine uses a weakened form of the live virus, which in areas of poor sanitation and low immunization rates, can spread.

Cases of circulating vaccine-derived poliovirus (cVDPV) now outnumber cases caused by the wild polio virus, but it has been seen as an acceptable risk. Before the immunization program, hundreds of thousands of cases of polio and paralysis were reported annually.

The total number of cVDPV cases is less than 1,000 per year – and can be blocked by returning to an area, and re-immunizing the population.

The Global Polio Eradication Initiative is a partnership, engaging the World Health Organization (WHO), Rotary International's End Polio campaign, the U.S. Centres for Disease Control and Prevention, United Nations Children’s Fund (UNICEF) and Bill and Melinda Gates Foundation, in partnership with national governments – and it recognizes the conundrum.

There are still three countries in which the wild strain of polio is endemic – Pakistan, Afghanistan and Nigeria – and 18 countries that have seen outbreaks of the vaccine-derived virus.

However, since the removal of the Type 2 polio strain component from the oral polio vaccine in 2016, there have been 47 reported cVDPV-type 2 outbreaks in 20 countries, some of which have proven to be difficult to control.

“They anticipated vaccine-derived cases would outnumber wild poliovirus cases, but not the number and scale of the outbreaks that happened,” said Anne Kell, president of the Innisfil Rotary Club and a long-time supporter of the End Polio Now campaign.

Her assessment is confirmed by Joseph Swan, Communications Officer-Containment with the Global Polio Eradication Initiative.

He noted that in 2015, “the trivalent oral polio vaccine (tOPV) containing weakened strains of types 1, 2, and 3 poliovirus was switched out to the bivalent form (bOPV) containing only strains of types 1 and 3.” The decision was made because type 2 wild poliovirus had been declared globally eradicated in 2015 – and at the time, “the type 2 vaccine virus strain accounted for 90 percent of cVDPV, so its withdrawal from routine use was deemed necessary from a public health point of view.”

While the WHO anticipated that cVDPV cases would continue to outnumber wild poliovirus cases, no-one was prepared for the result: the modelling did not predict the number and scale of cVDPV type 2 outbreaks, “some of which have proven very difficult to stop,” Swan noted.

It turned out that mucosal immunity (in the respiratory system, membranes of the intestines and urinary tract) to type 2 poliovirus in children was being lost, leading to the outbreaks of cVDPV2.

It is mucosal immunity that interrupts the person-to-person spread of polio.

Coming back and re-immunizing with a monovalent type 2 polio vaccine has been effective in controlling outbreaks, but there is another problem: the difficulty of immunizing an entire population, during any one campaign.

“The barriers to reaching every child in an area because of nomadic populations, unrest/insecurity and even challenging terrain have likely made the problems worse,” Kell said. “I know from our experiences in India just how hard it is to deliver any kind of medical services to isolated people.”

Again, Swan provided confirmation. “When campaign quality is poor and not enough children are reached with the vaccine, there is a risk of seeding new viruses among under-immunized populations,” he pointed out. “There has been evidence of this happening inside and outside of outbreak response zones.”

A new “more genetically stable oral polio vaccine,” for type 2 poliovirus, nOPV2, is now under development. So serious are concerns over the spread of vaccine-derived polio, that the WHO has given emergency approval to the new vaccine, bypassing major clinical testing and permitting its use as early as June 2020.

“It is expected that this vaccine will be significantly less likely to revert into a form which causes paralysis,” Swan explained.

Kell remains concerned. “It’s a real risk, because they have only done animal and small volunteer group trials, so who knows if the new vaccine will work as well as they hope, or if unanticipated side effects will appear?” she questioned.

With an estimated 210 million children at still at risk of polio, “the challenge is, do they vaccinate and trust the new vaccine will work, or take the time through trials to know for sure – and risk the rise in numbers of polio cases? Tough choice, in my opinion,” Kell noted.

In the balance, looking at the numbers, she continues to support the campaign. Over the past 10 years, according to the WHO, over 20 billion doses of oral polio vaccine have been administered to over 1 billion children, multiple times – preventing more than 650,000 annual cases of the disease, and more than 30,000 childhood deaths.

“Polio’s impact on those who aren’t protected from exposure to the virus through vaccine can be devastating, especially in countries where health care and social services are precarious or even unavailable,” Kell noted.

She called for better monitoring, and a more concerted effort to reach populations at risk – and, if the new vaccine doesn’t prove to be effective, even a return to the pre-2016 trivalent oral vaccine.

“A more concerted effort to reach every child is surely part of the answer,” Kell said. “Whether it’s eradication teams travelling to transit and refugee centres to connect with the people fleeing unrest, or even just partnering more with local groups and authorities to help reach all children, there are ways to reach more people.”

Swan agreed. “Poliovirus – be it wild or vaccine-derived – does not survive long in the environment. If it does not find an un/under-vaccinated person to infect, it will die out. This is part of the reason it can be eradicated,” he noted.

And once all wild polioviruses have been eradicated, the ultimate goal is also to stop all use of the oral polio vaccine, to also eliminate the “long term risks of cVDPVs.”

In the meantime, efforts to end polio will need a greater commitment, of effort, manpower and funding, in 2020. To make a donation, click here.