Teddys Littleangel races to a perfect record at Georgian Downs 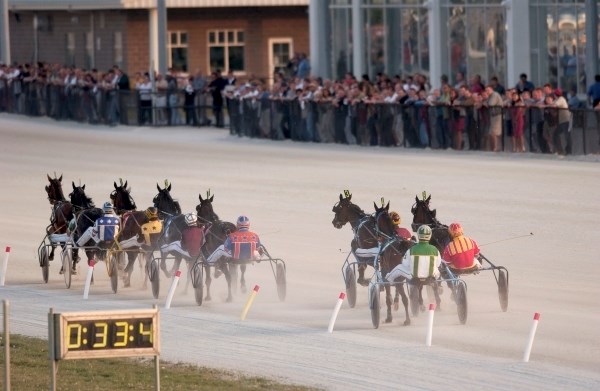 NEWS RELEASE
GEORGIAN DOWNS
****************************
INNISFIL - Three-year-old trotting filly Teddys Littleangel made the second trip of her career to Georgian Downs on Tuesday evening and delivered the same result as she did in last summer’s debut – an open length victory in Ontario Sires Stakes action.

Driver Doug McNair fired Teddys Littleangel away from Post 6 and led the field of seven Gold Series hopefuls to a :27.4 opening quarter. Carrying on to a :57.2 half and a 1:26.1 three-quarters, Teddys Littleangel was never seriously threatened and she opened up a three and one-half length margin on her peers in the stretch before stopping the clock at 1:55. Royal Esteem closed well for second, just ahead of third-place finisher Royal Rhythm and fan favourite Bright Eyes M, who settled for fourth.

“Dougie (McNair) said that’s the best she’s been. She was exceptional tonight,” said MacDonnell, who trains the filly for owner-breeder Leonard Gamble of Etobicoke, Ont. “That was a good trip. She had to work pretty hard to get front and then she had enough left. We’re really happy with her.”

The win was the Archangel daughter’s third straight in Gold Series action. She was also victorious at Grand River Raceway on July 3 and Woodbine Mohawk Park on July 18. Unlike most of her peers, Teddys Littleangel did not race in between Tuesday’s start and the July 18 Gold Series event. MacDonnell gave the filly some time off and then qualified her at Woodbine Mohawk Park on Aug. 6.

“I didn’t want to race her in with old horses and that’s the only place that she could race. We tried to get her in at Mohawk and the class, three-year-old fillies, didn’t fill,” explained Allenford, ON resident MacDonnell. “It worked out fine. I really wasn’t too concerned with the layoff because she keeps herself pretty fit.”

MacDonnell also opted for the layoff because, if she stays happy and healthy, Teddys Littleangel is looking at an action-packed schedule at Woodbine Mohawk Park over the coming weeks. The Simcoe Stakes goes postward on Sept. 6, followed by the Elegantimage on Sept. 14. The last Gold Series event is slated for Sept. 26 and the top 10 point earners from the five regular season events will compete in the Super Final on Oct. 12.

Last year’s Gold Series champion HP Titania Runner scored her second win of the season in the other $106,400 division on Tuesday. Starting from Post 6, driver Louis-Philippe Roy eased HP Titania Runner away from the starting gate and settled in sixth as Mattys Smilin reached the opening quarter in :28. Mattys Smilin handed off to Champagne Jane before the :56.3 half and Roy sent HP Titania Runner up the outer lane, beginning their advance on the leaders.

“I think she’s coming back to what she was last year. Her last few starts were good and tonight she raced large,” said Guelph, Ont. resident Roy. “Credit to her and the team that’s working with her every day.”

Roy drove the E L Titan filly to the win for trainer Raphael Bourassa of Fergus, Ont. and owner-breeders Claude Hamel of Ayer’s Cliff and Michel Damphousse of Louiseville, Que.

Georgian Downs wraps up its 2019 Ontario Sires Stakes schedule this Sunday, Aug. 18 with the fourth Gold Series Leg for the three-year-old pacing colts. The colts will be part of the Family Day program, which is highlighted by the annual Hon. Earl Rowe Trot. Post time for Sunday’s card is 6 p.m.

Five-year-old Bradford boy swings by Holland Gardens to show off golf game (5 photos)
Dec 8, 2019 12:30 PM
Comments
We welcome your feedback and encourage you to share your thoughts on this story. We ask that you be respectful of others and their points of view, refrain from personal attacks and stay on topic. To learn about our commenting policies and how we moderate, please read our Community Guidelines.