Iconic suit and dress shirt clothier Brooks Brothers Canada Ltd. has cleared a hurdle to join its American retail counterpart in U.S. bankruptcy court, paving the way for its sale to a U.S. joint venture.
Sep 28, 2020 2:22 PM By: Canadian Press 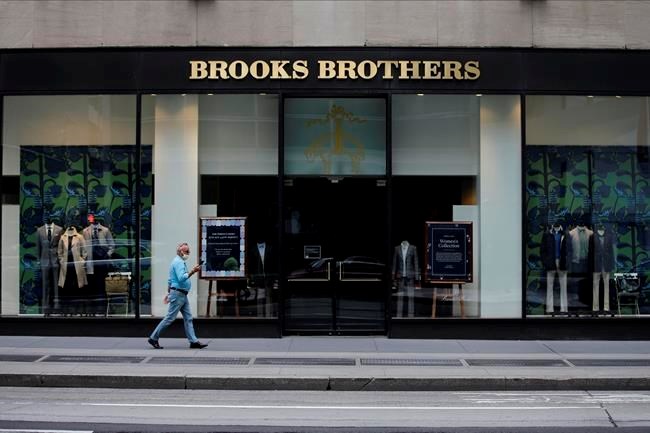 Iconic suit and dress shirt clothier Brooks Brothers Canada Ltd. has cleared a hurdle to join its American retail counterpart in U.S. bankruptcy court, paving the way for its sale to a U.S. joint venture.

An Ontario Superior Court judge granted an order under the cross-border insolvencies section of the Companies’ Creditors Arrangement Act earlier this month.

It also recognizes the U.S. Bankruptcy Court’s Chapter 11 restructuring process as the “foreign main proceeding” and grants a stay against debtors.

The court order is a step toward completing the sale of the 202-year-old clothier’s Canadian assets — mainly inventory — to SPARC Group LLC, which purchased Brooks Brothers and its subsidiaries and affiliates for US$325 million last month.

The initial offer was a “stalking horse” bid of $305 million, which increased by another US$20 million following an auction and bidding process.

Yet there remain a few legal steps yet before SPARC takes over the luxury clothing brand’s Canadian assets.

A motion filed last week with the Ontario Superior Court by Brooks Brothers’ lawyers seeks, among other things, a court order approving the sale of the company’s Canadian assets to SPARC.

“The sale transaction is fair and reasonable and represents the best possible outcome for stakeholders,” the factum filed Sept. 24 said.

The factum adds that the going-concern sale of the business avoids “the social and economic costs of bankruptcy” and provides “continued income to employees and suppliers.”

Brooks Brothers, the oldest apparel company in the United States, filed for bankruptcy in July.

Yet even before the pandemic, the upscale retailer was struggling, according to the first report by professional services firm Alvarez &amp; Marsal Canada Inc., named as the information officer for the Canadian proceedings in a supplemental court order.

Despite efforts to rein in costs, improve efficiencies and increase brand loyalty, the report said Brooks Brothers also began exploring alternatives, including the potential sale of its assets.

However, the COVID-19 crisis brought on more severe liquidity and operational challenges, with its foreign vendors unable to operate and ship inventory.

However, while the American retailer filed for bankruptcy on July 8, Brooks Brothers Canada stayed out of the proceedings in an attempt to pursue out-of-court restructuring, a factum by lawyers for the company said.

Yet once the U.S. Bankruptcy Court approved the sale of Brooks Brothers to SPARC, both sides agreed before the sale closed that it would be beneficial for the Canadian arm of the retailer to obtain a court order recognizing and approving the sale.

This report by The Canadian Press was first published Sept. 28, 2020.

US stocks tumble toward worst day in a month amid virus woes
Oct 26, 2020 1:00 PM
Comments
We welcome your feedback and encourage you to share your thoughts. We ask that you be respectful of others and their points of view, refrain from personal attacks and stay on topic. To learn about our commenting policies and how we moderate, please read our Community Guidelines.