Ottawa's budget measures for small- and medium-sized businesses include pandemic-related program extensions and funding boosts even as the government rolls out a $15 federal minimum wage.
Apr 19, 2021 6:13 PM By: Canadian Press 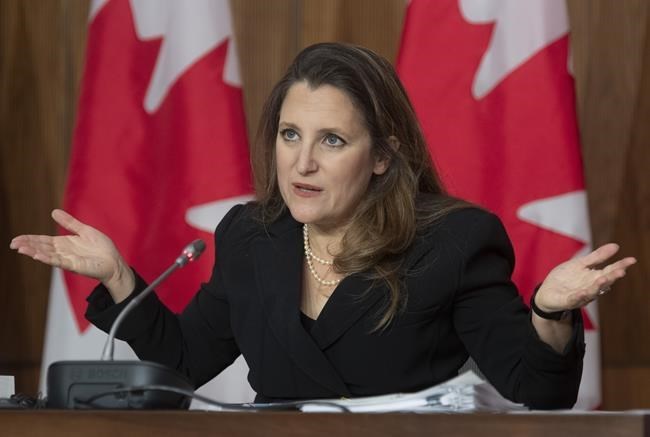 Ottawa's budget measures for small- and medium-sized businesses include pandemic-related program extensions and funding boosts even as the government rolls out a $15 federal minimum wage.

The federal budget unveiled Monday plans to extend — then gradually wean businesses off — the pandemic-triggered programs while phasing in new measures.

Ottawa is extending rent and wage programs while at the same time phasing in hiring subsidies, microgrants to help companies move online and allowances for capital investment expenditures.

The goal, Finance Minister Chrystia Freeland said in a prepared version of her budget speech, is to “punch our way out of the COVID recession” and ensure small businesses remain the heart of the economy.

“While many big, multinational companies have actually prospered during this low-interest rate COVID year,” the budget reads, “our small businesses have been battered.

“Healing the wounds of COVID requires a rescue plan for them.”

The budget – the first in two years and the first since the onset of the COVID-19 pandemic – comes as small businesses once again contemplate closures, bankruptcies and layoffs as the country struggles with shutdowns related to a more virulent third wave of the virus.

The business wage subsidy, rent subsidy and lockdown top-ups will be extended to Sept. 25. The timeframe will also be expanded for Canadians infected with the virus who take sick leave, are in isolation or care for children and family.

The extension of the wage subsidy and rent subsidy with lockdown top-ups is expected to cost $10.1 billion and $1.9 billion, respectively. The rate of both will gradually be decreased starting in July, as vaccinations become more widespread.

“The wage subsidy extension is prudent, given that there's a lot of uncertainty around the vaccine rollout … but once you start to apply the policy, it just gets very difficult,” said Pedro Antunes, chief economist at the Conference Board of Canada, a non-partisan think tank.

The Canadian Federation of Independent Businesses, which had warned that more than 181,000 businesses risk closing over the next year, welcomed extensions to subsidies, the new hiring program and the government's commitment to try to reduce credit card swipe fees for small businesses.

But the advocacy group was disappointed new businesses were overlooked.

“Today’s budget delivered meaningful support to many, but there are still critical gaps in the federal relief programs that exclude tens of thousands of hard-hit businesses," CFIB President Dan Kelly said in a statement.

The CFIB spent much of the pandemic urging the government to boost its small business supports but asked for a moratorium on new costs for small businesses, forgiveness for more small business debt, longer repayment terms for loans and hiring incentives.

It demanded the government also hold off on introducing consumer incentives to spur spending until small businesses can fully open and benefit.

As the wage subsidy winds down, the government plans to introduce the Canada Recovery Hiring Program to offset the cost of increasing worker hours or hiring additional staff as businesses reopen.

The new program is expected to cost $595 million and will involve a subsidy of up to 50 per cent between June 6 and Nov. 20 for a maximum of $1,129 per employee per week.

The government will also spend $4 billion on the Canada Digital Adoption Program, that will create a “Canadian technology corps” of 28,000 young Canadians, who will be trained and deployed to help as many as 160,000 small businesses move online and offer e-commerce.

These businesses will be eligible for microgrants to support digitization. For companies farther ahead with technology adoption, there will be access to advisory support.

The budget also proposes allowing immediate expensing of up to $1.5 million of eligible capital investments by Canadian-controlled private corporations made on or after budget day and before 2024 to free up cash that can be used for job creation.

They will be paired with improvements to the Canada Small Business Financing Program, that will now include lending against intellectual property and start-up assets and expenses, raising the maximum loan to $500,000 from $350,000 and a new line of credit to cover short-term capital needs.

But the budget will not be without costs to businesses. The government will implement a $15 minimum wage for federally regulated employees that will rise with inflation and include provisions to ensure that where provincial or territorial minimum wages are higher, that wage will prevail.

The government says the measure will benefit more than 26,000 workers – 36 per cent of them newcomers or immigrants.

But Antunes said a federal minimum wage increase affects relatively few people while some regions have significantly higher costs of living than others.

“I just find that the market probably settles these things better,” he said.

Security chiefs report cyberattacks on business up since remote work enabled
May 12, 2021 12:05 AM