OTTAWA — Surging COVID-19 infections pushed Canada over 400,000 cases Friday, as federal officials announced a bigger order of prospective vaccines and released refined guidelines on who should be first for those doses.
Dec 4, 2020 4:40 PM By: Canadian Press 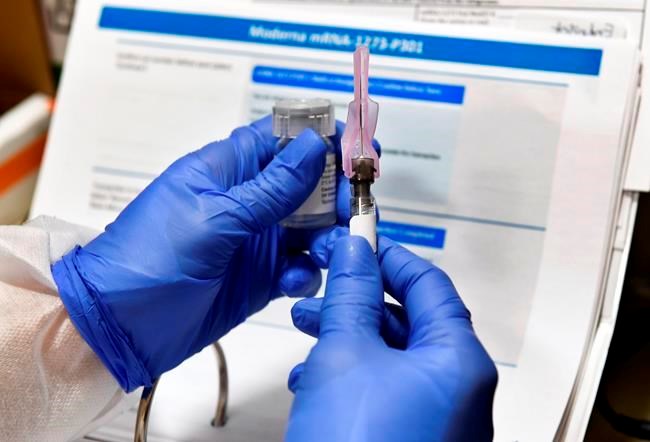 OTTAWA — Surging COVID-19 infections pushed Canada over 400,000 cases Friday, as federal officials announced a bigger order of prospective vaccines and released refined guidelines on who should be first for those doses.

The new milestone came as Prime Minister Justin Trudeau noted case counts were "too high," especially in Alberta "where the numbers are rising alarmingly."

Warning of increased strain on hospitals and health-care workers, he singled out soaring numbers in the western province that have led the country in per-capita case rates. But Trudeau also called on all Canadians to redouble containment efforts.

"Now is not the time to blame one another or point fingers. Now is the time for us to keep working together," Trudeau said as he acknowledged a "difficult" holiday season ahead.

The latest 100,000 cases racked up in just 18 days, marking the shortest growth period since the pandemic was declared in March.

Canada's national death toll from the virus stands at 12,470.

The new cases Friday included 1,780 infections in Ontario, 1,345 in Quebec, 320 in Manitoba, 283 in Saskatchewan, eight in New Brunswick and eight in Nunavut.

Ontario Health Minister Christine Elliott said spread had "hit a critical point" in her province, where there are 633 new cases in Toronto, 433 in Peel and 25 more deaths linked to the virus.

In Ottawa, Trudeau and Procurement Minister Anita Anand faced additional questions about when Canada would approve and distribute prospective COVID-19 vaccines that are said to be nearing deployment in other countries.

Anand said Canada had increased its order with Moderna and now expects at least 40 million doses from the U.S. biotech in 2021 – twice as much as was previously guaranteed.

Anand said the country is exercising its option to obtain more of Moderna's two-dose candidate, which should be enough to vaccinate almost 20 million people.

Meanwhile, the National Advisory Committee on Immunization refined its guidance on who should be at the front of the line when an approved vaccine is distributed.

NACI's advice to provinces and territories is that the first doses go to residents and staff of congregate living settings that care for seniors.

They should also initially be prioritized for adults 80 years of age and older, then decreasing the age limit by five-year increments to age 70 as supply becomes available.

Also on the list: health-care workers and adults in Indigenous communities where infection can have disproportionate consequences.

Chief public health officer Theresa Tam noted final deployment plans remain with the provinces. She said the refined list assumes initial vaccine deliveries would include six million doses — enough in the first round of vaccinations to cover those from the priority groups who want it.

"As a ballpark, these four groups of people as things are rolled out should be covered by the initial doses," said Tam.

"But I just have to caution that given there are so many different parameters and uncertainties, we just have to be prepared for unexpected things to happen."

In early 2021, Canada expects a combined total of six million doses of the Moderna and Pfizer/BioNTech COVID-19 vaccines, if authorized for distribution.

A contract has been awarded to FedEx and Innomar Strategies to help support the physical distribution of vaccines to provincial and health authorities across the country.

Health Canada said the review for Moderna is ongoing while regulatory approval of the Pfizer/BioNTech vaccine could come as early as next week.

It said its messenger RNA vaccine shows signs of producing lasting immunity to COVID-19 and that Canada — the first country to sign a deal to buy its vaccine — will get doses from the first batches.

– By Cassandra Szklarski with files from Mia Rabson

New maritime cybersecurity centre to fight pirates — and not the swashbuckling kind
Jan 28, 2021 7:00 AM