OTTAWA — The federal Liberals are betting that billions more in debt will pay for itself with the economic growth fuelled by helping thousands of workers find jobs and small businesses adapt to shifting consumer behaviour.
Apr 19, 2021 6:03 PM By: Canadian Press 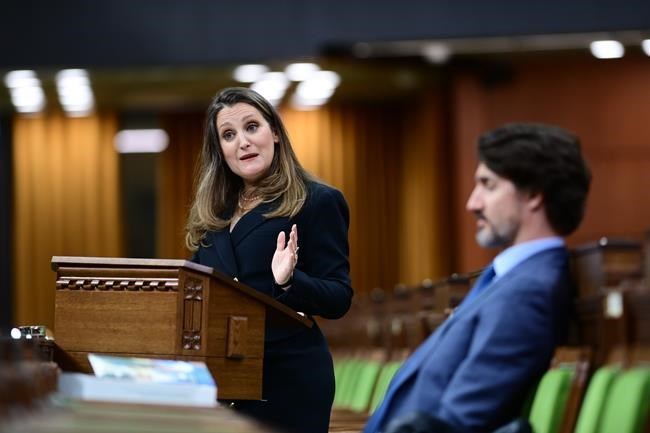 OTTAWA — The federal Liberals are betting that billions more in debt will pay for itself with the economic growth fuelled by helping thousands of workers find jobs and small businesses adapt to shifting consumer behaviour.

The government’s budget estimates its plan will create or maintain some 330,000 jobs next year and add about two percentage points to economic growth, part of a boost from $101.4 billion in new spending over three years.

The largest contributor is almost $30 billion over five years to drive down fees in licensed daycares with the goal of reaching $10 a day by 2026. That money is on top of already planned child-care spending.

There is also more money for broadband infrastructure and $7 billion in cash, financing and advice to help companies adopt and invest in new technologies, which is intended to address ongoing concerns about the country's productivity gap.

All that extra spending will send the deficit to $154.7 billion this fiscal year, one year after a record-smashing $354.2 billion deficit induced by the pandemic that sent the national debt above $1 trillion.

The Liberals plan to keep open the taps of emergency aid until at least the fall as the labour market and businesses continue to struggle under the weight of COVID-19.

Speaking to reporters, Finance Minister Chrystia Freeland said the spending plan, while costly, was a worthy one to make sure the recovery doesn’t falter.

“For me, the fact that we are about more than 450,000 jobs short of where we need to be to be at pre-pandemic employment levels is an urgent problem for Canada and we need to invest now to get those jobs back quickly,” she said.

“I would also say the best way to pay our debts back is to invest in long-term growth. The best way is have a Canadian economy which is growing vigorously and robustly and that is what this budget is designed to do.”

The government expects the economy to rebound sharply from last year's downturn, with real gross domestic product forecast to rise by 5.8 per cent in 2021 after a 5.4 per cent contraction in 2020. The estimate from private-sector economists puts the economy on track to grow by four per cent in 2022, before coming back down to earth with growth in 2025 clocking in at 1.8 per cent.

Federal spending plans will need to help businesses invest in themselves to bump GDP growth beyond two per cent, said Pedro Antunes, chief economist at the Conference Board of Canada, a non-partisan think tank.

The budget tries to address some of those concerns by allowing business to more quickly write off investments, funding digital adoption and e-commerce programs, offering more infrastructure money targeted at trade corridors and borders and as a subsidy to offset the costs of new hires for hard-hit businesses if the value is greater than what they would get under the wage subsidy.

“Maybe we will see some of these effects, this adoption of technology, have a bigger impact on productivity than we might imagine and … this shock to the system being a driver of productivity gains like we haven't seen,” Antunes said.

Perrin Beatty, president of the Canadian Chamber of Commerce, said other budget items should be prioritized to help longer-term competitiveness like bringing interprovincial trade barriers and reducing the regulatory burden in Canada.

Employment should recover to pre-pandemic levels by summer as vaccination rates rise and fears of spreading the virus ease. The unemployment rate, though, won’t reach its pre-pandemic low for another five years, the government estimates.

Ongoing concerns about longer recovery times in some sectors is why the budget promises to extend the federal wage and rent subsidies through to the fall, and similarly extend emergency aid to workers, although reducing the amounts paid out over time.

The extensions, along with extra weeks for expanded employment insurance, will cost the government roughly $26.8 billion this fiscal year.

Dan Kelly, president of the Canadian Federation of Independent Business, welcomed the extra help for small businesses, but he noted critical gaps in eligibility haven't been addressed, nor did the budget outline a plan to help his members manage the tens of thousands in debt they have taken on to survive the pandemic.

There also is nearly $2.5 billion in measures for skills training programs, a promise to raise the federal minimum wage to $15 per hour, and an $8.9 billion boost over five years to a Stephen Harper-era benefit to the working poor that the Liberals expanded once before, offering to raise the earnings threshold after which Canada Worker’s Benefit payments are reduced.

"This is where people have some questions, because a lot – and especially the Conservatives – will say, 'We don't want to reward anyone to stay at home and do nothing.' So I think the Liberals have decided to answer that and say, 'No, we'll target only those who want to go to the market and help them to do so,' " said Geneviève Tellier, a public-finances expert from the University of Ottawa.

Overall, the budget adds more than $100 billion in new spending to the fiscal framework, which is largely offset by $70 billion in higher revenues due to an improved economic outlook, said David Macdonald, senior economist with the Canadian Centre for Policy Alternatives.

"It continues to amaze me that despite the pandemic spending and all of these new measures that we'll still be spending less on interest payments than at any time in a century," he said.

"This is exactly what we should be doing, taking maximum advantage of record low interest rates, locking them in and investing in Canada and its people."

The Liberals are also committing anew to tethering spending to a budgetary anchor by having the debt decline as a percentage of GDP. The debt-to-GDP ratio will rise this year to 51.2 per cent, before declining in the ensuing years to 49.2 per cent by 2026.

The outlook for the deficit rests on government vaccination efforts. A faster return to some level of pre-pandemic normalcy would mean a sharper rebound and a deficit of $144.3 billion this year, while the deficit could flirt around $170 billion if vaccine rollout takes longer than the government’s summer outlook for a first shot to anyone who wants one.