HALIFAX — Three people, including the killer's former spouse, have been charged with supplying ammunition to the gunman who killed 22 people in the April 18-19 mass shooting in Nova Scotia.
Dec 4, 2020 1:29 PM By: Canadian Press 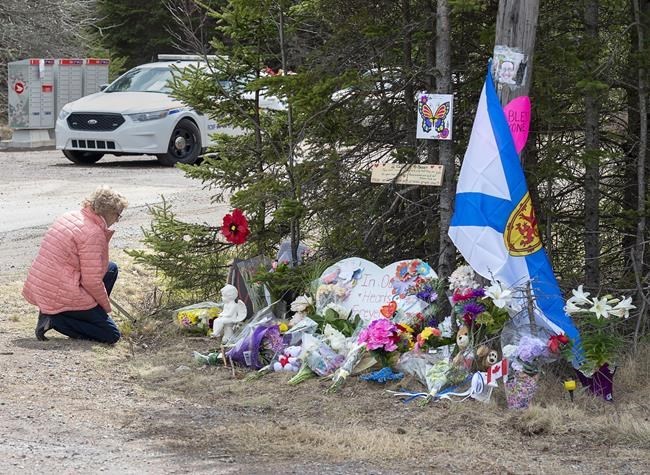 HALIFAX — Three people, including the killer's former spouse, have been charged with supplying ammunition to the gunman who killed 22 people in the April 18-19 mass shooting in Nova Scotia.

Lisa Banfield is listed on court probate documents as the common law spouse of the gunman, Gabriel Wortman, who was killed by police on April 19.

Police say the offences occurred between March 17 and 18 but those charged "had no prior knowledge of the gunman's actions."

The rampage started the night of April 18, after police said Wortman assaulted his common-law spouse at his seasonal home in the village of Portapique.

Police have confirmed the killer, who disguised himself as a Mountie and drove a replica RCMP vehicle, was armed with two semi-automatic handguns and two semi-automatic rifles when he subsequently set fires to properties and killed 13 people in or near the village.

He killed another nine people the following day in several other communities in northern and central Nova Scotia before being fatally shot by an RCMP officer at a gas station in Enfield, N.S., about 90 kilometres south of Portapique.

Wortman's victims included an RCMP officer, two nurses, two correctional officers, a family of three, a teacher and some of his neighbours in Portapique.

Investigators say they determined the ammunition was purchased and trafficked in Nova Scotia. The news release says the people charged, who are all Nova Scotia residents, co-operated with police in the investigation. They are scheduled to appear in Dartmouth provincial court on Jan. 27.

Nick Beaton, whose wife Kristen was killed in the shooting along with their unborn child, said he was pleased to hear the probe had carried on.

"I'm glad the investigation is still going forth. I'm glad they're doing their job and they're still investigating," he said in a telephone interview on Friday.

A spokeswoman for the RCMP declined further comment on what connection Wortman had to the individuals charged.

"We respectfully refrain from further commenting on these matters outside of the (public) inquiry," the news release says.

The provincial and federal governments have called a joint public inquiry that will probe, among other things, the RCMP response to the shootings.

According to court documents, Wortman's spouse told police after the shooting that the killer had incidents when he was violent. The documents say this included an incident in 2016 when he smashed his father's head against a pool during a family vacation in the Caribbean.

In addition, Lisa Banfield has sued the estate of the Dartmouth denturist, saying she and Wortman were together at his property in Portapique, N.S., on the night of April 18 and she was a victim of "an assault and battery perpetrated against her by Mr. Wortman."

She also alleged in the Aug. 12 court document she was held against her will by him and suffered "intentional infliction of mental suffering" on that night.