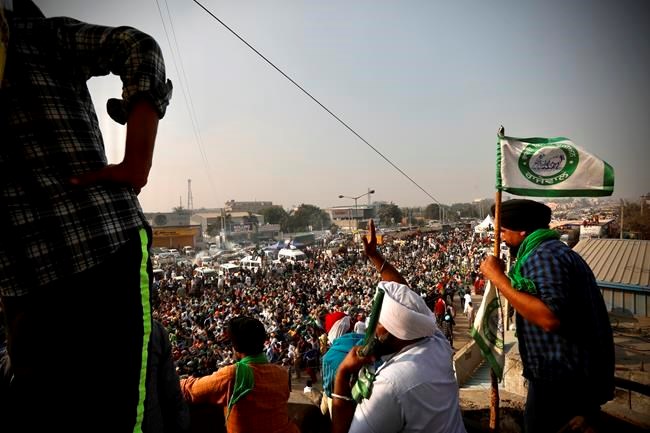 Trudeau was asked Friday about India's decision to call Canada's high commissioner on the carpet at the foreign ministry in New Delhi over remarks the prime minister offered in support of Indian farmers earlier this week.

Trudeau said previously that he was concerned about the protests in India and that Canada would always support the right of farmers to be heard — remarks the Indian government now says amount to interference in its affairs and potentially damaging to its relations with Canada.

"Canada will always stand up for the right of peaceful protest anywhere around the world. And we're pleased to see moves towards de-escalation and dialogue," Trudeau said Friday when asked about India's criticism of his remarks.

The High Commission of India in Ottawa had no comment when contacted Friday.

Indian farmers have been met with tear gas and water cannons while protesting new laws enacted by the government of Prime Minister Narendra Modi that they say will subject them to corporate exploitation by driving down prices for their products.

Many of the farmers are Sikhs, and Indian media reports say Trudeau is playing to Canadians of Sikh origin by wading into the matter.

Trudeau has been facing criticism in India from politicians and pundits since his appearance on Monday in a video town hall meeting with the Canadian Sikh community to celebrate the festival of Guru Nanak Dev Ji Gurpurab, which marks the birthday of Guru Nanak, the founder of Sikhism.

It wasn't the first time Trudeau has offended Indian sensibilities. He was widely criticized during his February 2018 trip to the country for dressing up in local garb, and for the invitation mistakenly given to a Sikh extremist to one of his events during that visit.

Trudeau told the Monday event that he wanted to recognize "the news coming out of India about the protest by farmers. This situation is concerning. And we're all very worried about family and friends. I know that's a reality for many of you."

Trudeau then went to tell the meeting that "Canada will always be there to defend the right of peaceful protest."

Trudeau said Canada believes in the importance of dialogue. "And that's why we've reached out through multiple means directly to the Indian authorities, to highlight our concerns. This is a moment for all of us to pull together."

On Friday, the Indian foreign ministry posted a statement that said Canadian High Commissioner Nadir Patel had been "summoned" to its headquarters and told that comments by "the Canadian prime minister, some cabinet ministers and members of Parliament on issues relating to Indian farmers constitute an unacceptable interference in our internal affairs."

The statement also said the comments "encouraged gatherings of extremist activities in front of our high commission and consulates in Canada that raise issues of safety and security." It called on Canadian political leaders "to refrain from pronouncements that legitimize extremist activism."

The statement said that if "such actions" continued they would have "seriously damaging impact on ties between India and Canada."

Asked Friday if he was concerned about damaging relations with India, Trudeau replied without skipping a beat: "Canada will always stand up for the right for peaceful protests and for human rights around the world."

There has been no shortage of criticism of Modi's human rights record among international watchdogs, whether it is accusations of running roughshod over the rights of Muslim minority groups or cracking down on free speech and dissent, after his Bharatiya Janata Party won re-election in May 2019.

In September, Amnesty International ended its work in India after the Modi government froze its bank accounts. "This is the latest in the incessant witch hunt of human rights organizations by the government of India over unfounded and motivated allegations," Amnesty said.

Note to readers: This is a corrected story. A previous version said Prime Minister Justin Trudeau was asked if he was concerned about damaging relations with China.