Horror on the Holland River

A tragic ending to a fun evening of skating for past Bradford principal
Nov 7, 2020 8:00 AM By: Natasha Philpott 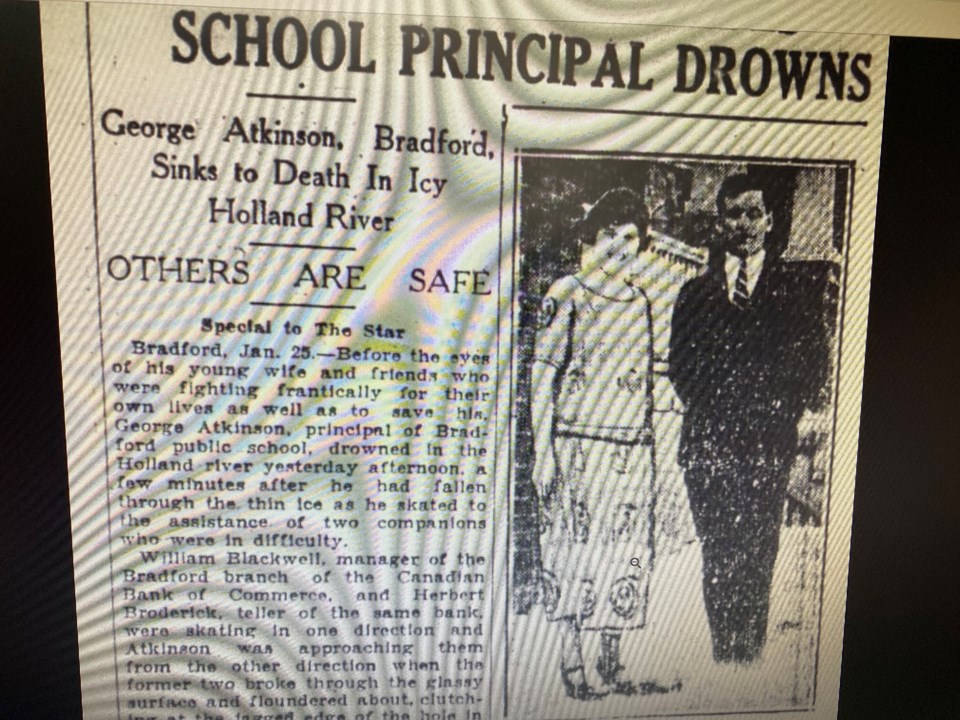 A tragegy on ice from January 1933. BWGPL Archives

On a cold winter day in January, 1933, Bradford school principal 36-year-old George Atkinson was out with his wife and three friends skating on the Holland River.

While gliding across the ice, without warning, the ice gave way and two of the five friends, Herbert Broderick and William Blackwell were submerged into the river.

They struggled to keep afloat as they clung to the jagged edge of the hole. Atkinson immediately sprinted toward his friends to help, but unfortunately crashed through the ice where he was carried underneath the water to his death.

Broderick and Blackwell eventually made their way back up above water back to safety. The other two skaters, Adelaide Keeney and Mrs. Helen Atikinson (George's wife) stood by and watched the tragedy unfold. Mrs. Atkinson collapsed from shock, and Keeney and Blackwell ushered her to a farmhouse nearby.

Broderick skated back to the Riverview Inn to let police know about the tragedy that had occurred on the river where an alarm was raised and residents rushed to the river bank. With lanterns, flashlights, hooks and poles, they scoured the area until the wee hours of the morning to try to locate his body, but it wasn't found until noon the next day.

Atkinson had been the Bradford school princiapl for 10 years, and served in the Great War. He was well-known for participating in local sports.

He left behind his wife, and seven-year-old son, Alan.

He is buried at Mount Pleasant cemetery, Bradford.

Mrs. Helen Atkinson passed away in 1965 and is buried at the same cemetery as her husband.