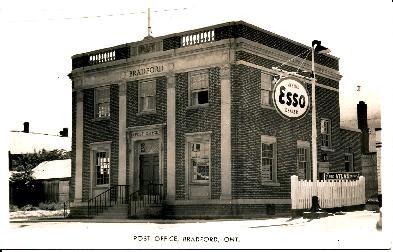 Postcard Memories is a series of historic views, stories and photos of Bradford West Gwillimbury, a trip down memory lane on a Saturday morni

Bradford's first post office opened in 1835, and J. Peacock was its first postmaster.

It was Jan. 1, 1875 when Mr. H.S. Broughton was appointed postmaster, where he and his daughter, Miss Vida Broughton worked.

When Mr. Broughton passed away in 1916, Mr. William Wood was appointed as postmaster, after working closesly with Mr. Boughton. He was also engaged to Miss Broughton.

After Mr. Wood's death, Mr. George D. Morton took over as postmaster and Miss Broughton worked in the office until her retirement in 1941.

Mr. Morton retired in 1949 and was succeeded by Mr. Donald Semple who resigned in 1955, with Mr. Keith Stevens appointed to the position in 1956.

Before moving to its current home on the northwest corner of Barrie and John Streets in 1965, the post office was located just across the street at 22 Barrie Street, which is currently home to the new Star Buds cannabis shop.

It was built in 1936, and was the first building dedicated soley to a post office, designed by Arthur J. Saint of Bradford. Prior to this building being built, the post office was housed inside a building along Holland Street, where the current Century 21 office is.