Vinyl Frontier will be back, despite a rainy start

Record-lovers are invited to four more Vinyl Frontier events this summer, hosted by the Innisfil Arts, Culture and Heritage Council
0
Jun 24, 2019 7:00 AM By: Miriam King 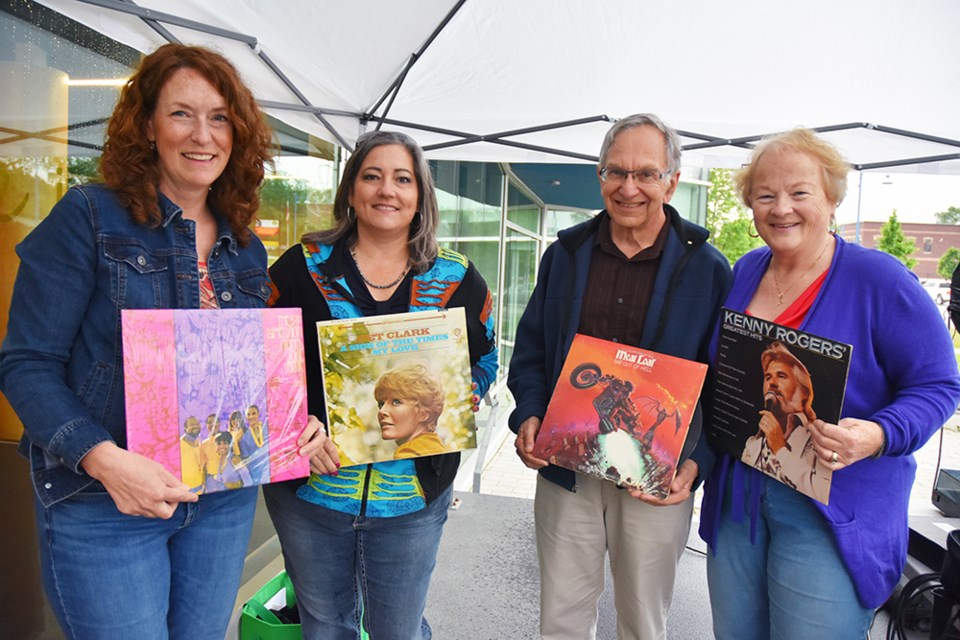 When the Innisfil Arts, Culture and Heritage Council came up with the idea of the Vinyl Frontier, its members envisioned gathering outside the Lakeshore Library in Alcona on a warm Thursday night to listen to and share vinyl records.

There’s nothing like a vinyl recording, say collectors: The nostalgia, the rarity of some recordings, the physical act of picking up a record and placing it on a turntable. While physics might deny that “vinyl sounds better than CD,” there’s a certain warmth – especially connected with pulling out a favourite album and listening to it spin one more time.

So it was disappointing when the first Vinyl Frontier evening saw the clouds roll in and the rain pour down.

Arts council members Mike and Shirley Richard, Sydney Hardie and Janice Sandor set up the tent and sound system anyway for a test run – even though the advertising for Vinyl Frontier warned that the event would be “weather-permitting.”

“Havin’ a little fun,” said Hardie, as the music played. “On a nice weather day, we’ll have milk crates full of albums for people to pick through,” and make requests.

All four are collectors, with an eclectic range of tastes – from Kenny Rogers to Meatloaf.

“I have a bunch of kids’ recordings,” said Hardie, promising to bring them next time, to take Baby Boomers on a trip down memory lane or entertain the younger fans in the crowd.

Record-lovers are invited to come out and listen to the music, dance in the square in front of the library at 967 Innisfil Beach Rd., and bring along their own favourite LPs to share, from 6-9 p.m. on the four remaining dates: July 11 and 25, and Aug. 15 and 22.

If the crowds come out, there could be a record swap, or perhaps a visit from an ice-cream truck, suggested Hardie.

But last Thursday night, there was nothing but rain. And after listening to one more record, the council members packed up their tent at the Vinyl Frontier and moved on.

Innisfil arts council puts spin on new vinyl group
May 29, 2019 8:30 AM
Comments
We welcome your feedback and encourage you to share your thoughts. We ask that you be respectful of others and their points of view, refrain from personal attacks and stay on topic. To learn about our commenting policies and how we moderate, please read our Community Guidelines.