Bradford volunteer, musician has a heart for helping others 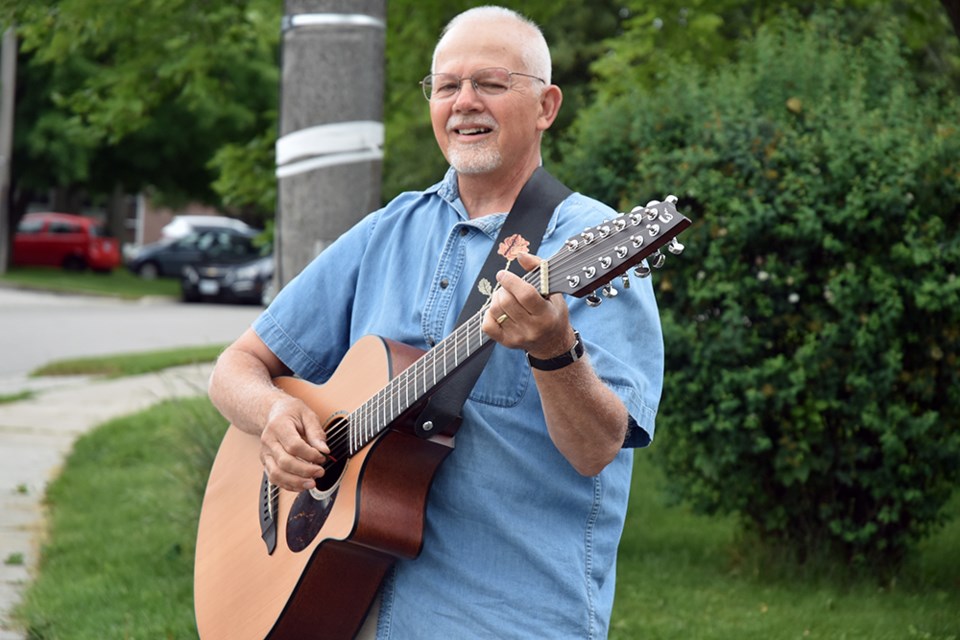 Dan Antonio with his guitar - bringing joy through his work, and his volunteer efforts. Miriam King/Bradford Today

Everything that Dan Antonio has done, at work and in his spare time, can be traced back to experiences in his youth.

When his beloved grandmother suffered a life-changing stroke, she was taken to Queen Elizabeth Hospital in Mississauga.

“As I visited her, I would often see volunteers at the chronic care hospital,” Antonio said. He observed the impact of those volunteers on the lives of the people in care, and was inspired.

He began volunteering at Queen Elizabeth, visiting with patients and adding a new dimension to their stay.

At the same time, in his late teens, he discovered his talent for music.

“A friend of mine started to play guitar,” Antonio said. “I thought, if he could do it, maybe there’s hope for me! I picked it up on my own, and never put it down.”

In fact, a quadriplegic patient at Queen Elizabeth Hospital, who wrote poetry, collaborated with Antonio on a number of songs.

He went from being a volunteer at the hospital, to being asked to work there – running the gardening program, woodworking shop, and a music program. His volunteer efforts had become a career.

Moving to a farm in the Nobleton area, Antonio was offered a similar position with New Leaf: Living and Learning Together Inc., “doing exactly the things I was doing at the hospital.” That was 31 years ago.

In addition to a day support program at a 112-acre farm in Queensville, New Leaf now operates 13 residential homes, as well as greenhouses and a woodworking shop, serving approximately 100 special needs individuals.

Antonio was working with people “with all kinds of challenges, physical and mental challenges, which is something I just love to do… It’s been one of the joys in my life, being able to work in that field. So many joys, so many blessings.”

Twenty-six years ago, he and his family moved to Bradford. And while he continued to work at New Leaf, he also found time to volunteer in his new home town.

“He has so many different connections in the community,” said wife Debbie. Dan provided children’s programming at the old public library, helped with the Pioneer Club at the high school, and “as a family  we volunteered, years ago, at the food bank, because we wanted (our children) to have that experience,” she said.

The family also participated in Pitch-In Day, even before it became a town-run community clean-up day. Residents may remember him out, picking up litter along the banks of the canal, not far from the family home.

Dan has also used his music in his volunteer work. Not only is he a member of the Praise Team at Bradford Baptist Church, he has brought his guitar and songs to Bradford Valley Care Community.

Since the long-term care centre opened on the 6th Line in Bradford, he has been part of Bradford Valley’s visitation team and palliative care team, and regularly performs concerts for the residents.

“Music is just so powerful. It breathes life into people,” Antonio said.

In his work with people with special needs, “music is such an incredible thing for them. It’s like giving them a whole new dimension.”

And when he sings as a volunteer at Bradford Valley, he said, “It brings back memories. Some people who have lost their speech, through strokes, can sing along.”

His volunteer work at Bradford Valley has been temporarily suspended, due to COVID-19, but he hopes to be able to get back to it, especially now that he has retired from New Leaf.

“I’m looking forward to when we’re allowed to go back in,” he said.

Both his work and his volunteering have a common theme. “It’s about interacting with people, almost becoming part of their life,” Antonio said. “You get more than you give.”